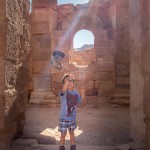 We had spent the previous day exploring Lower Petra and the High Place of Sacrifice with our guide Mohammed with the Gold Tooth. Today, we would join him again in our journey further into this spectacular ancient city to see even more wonders, including the largest building in Petra, the Monastery.

After a quick breakfast, our driver Qais Bader picked us up from Amra Palace and drove the short distance to the entrance of Petra. Armed with our two-day tickets (It is cheaper to buy multi-day tickets instead of purchasing tickets daily) we headed down the now familiar road toward the siq.

C enjoyed being our guide as he pointed out all the sites that our guide the previous day had talked to us about. We met Mohammed at our usual place just past the Treasury. C, Christina and D mounted up and we made our way through Petra towards the Colonnaded Street just past the Byzantine Church. The street, originally built in Nabataean times was later refurbished by the Romans during their occupation, is in bad disrepair due to centuries of flash floods and earthquakes.

Hard work has gone in to renovating this once awe-inspiring area. We stopped partway through the street and climbed the stairs on the left to the Great Temple, which is currently being reconstructed by students from Brown University. This is a wonderful place to stop and offers many more areas to explore than you would expect. It also was a great place for D to lose his hat, which we, unfortunately, didn’t notice until it was too late.

At the end of the Colonnaded street is a triple arch followed by the Temple of Qasr Al-Bin or Temple of the Pharaoh’s Daughter.

As we began our journey up to the Monastery our guide Mohammed pointed off to the left and stated that until 20 years ago, the cave on the second floor of the cliff had been his home. That is when the Jordanian government worked with the local Bedouins to build a village just outside of Petra.

The climb up to the Monastery isn’t an easy one. It consists of around 800 steps carved into the sandstone cliffs. It’s not difficult if you take your time, however, I was chasing four people on mules, so a slow pace wasn’t a luxury that I had. The climb doesn’t offer much in the way of views of the city of Petra. However, it is a chance to experience the scope of the mountains in which Petra lies and it offers spots of shade and comfort along the way. If you get tired there are many opportunities to stop by a Bedouin tent to share some tea and talk with locals about the day or buy a cold drink to refresh yourself.

The Monastery came up rather suddenly as we emerged from the canyon into a large open area with a small restaurant right in front of us. It took a moment to realize that directly on our right was the largest building in the city of Petra, The Monastery.

We wandered the area in front of this stunning building and explored, while D painted himself white with the crushed sandstone in the largest sandbox he had ever seen. This building is truly awe-inspiring, with a door larger than most houses and a facade nearly 50 square meters it can take a while to truly capture the entire thing in your vision. Broken columns from the Roman era litter the area directly in front of the Monastery giving evidence to the natural elements that this building has withstood throughout the two millennia of its existence.

The Monastery used to be open to exploration, but has since been closed and the area above it where visitors could climb on to the ten meter high urn that caps the facade is no longer accessible as well.

Continuing past the small restaurant offers a few more monuments to explore. However, the greatest part about continuing up the path is the breathtaking views of both the Monastery and the surrounding mountains. From the top you can clearly see Aaron’s Tomb on the tallest mountain on the far side of the canyon, Mt Hor.

After getting a drink of fresh lemon and mint juice from the restaurant and stopping at one of the local Bedouin tents for some tea, friendly conversation and a chance to buy some scarves to replace D’s lost hat, and my sweat-stained beyond repair hat, we continued back the way we had come up. When we reached the bottom, Mohammed invited us to his home at the nearby village for some tea and a ride back to our hotel. We gladly accepted the invitation and it made for a wonderful end to an epic day. The next morning we would be off to visit Little Petra.

Sitting about 9 km outside of Petra lies the town often referred to as “Little Petra” or Siq al-Barid due to its similarity in layout to Petra including a small siq leading into the town on both ends as well as the familiar carved facades of the buildings.

The town is easy to explore and can be done in a little over an hour. While many of the buildings offer a similar style to those in Petra but on a much smaller scale, they do offer a more intimate look into the daily lives of those who lived there. About halfway through the town on the left-hand side be sure to walk up the short steps that lead to the second floor of one of the buildings. Inside this building is a gated room where you can see the beautiful tiling that once covered the ceilings of many of these buildings.

At the far end of the town, there is another siq that requires a steep climb to enter, but if you brave the climb you will be rewarded with spectacular views of the Petra mountains.

We had worn ourselves out exploring every nook and cranny of the Lost City of Petra, and now it was time for something new. We would be heading to the famous Wadi Rum to walk in the footsteps of Lawrence of Arabia and experience some of the Bedouin life.

May I ask how much you pay to ride the animals in Petra?

The price varies but the general rate for a horse to the high place is about 10 USD in each direction. The horses to the siq vary a lot more depending on the season. It is very important to negotiate a firm price up front though. We've been told of many incidents where people were surprised with a cost when they hadn't resolved it upfront.

How amazing! We love ruins! We are going to see some Roman ruins in April in Southern France! Looks like you had an amazing time and you have an adorable little family!

Stunning! How did the kids cope with riding the mules? Did they enjoy it?

They loved it! C rocked the lead mule the whole way and D nodded off halfway down the mountain ;)

Now this looks AWESOME!! I am probably the biggest kid when it come to antiquity stuff. I love the mummies and all the histories, myths and legends, watch all the movies, documentaries. I can't wait to explore that part of the world and would have loved to with my kids in tow, maybe I'll take my grandkids. That's in no way, shape or a form a plea for grandkids mighty Nefertiti, just a statement. LOL

This is fabulous insight thank you Kevin - we live so close to Jordan but still haven't crossed it off the list. I think you've given me inspiration to push it up the agenda, this is too amazing to miss out on!

Glad to hear it Keri! You won't regret it!