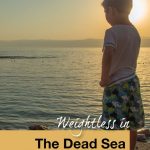 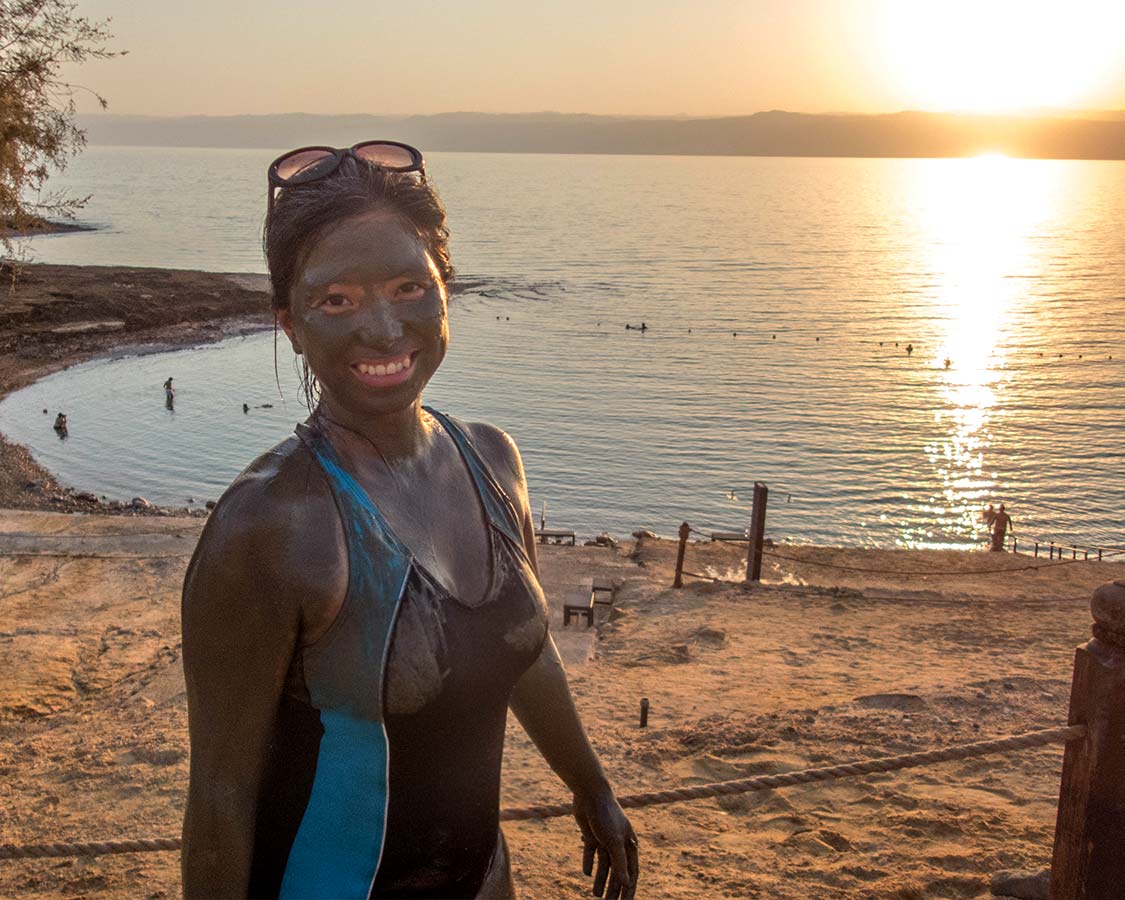 Floating on the Dead Sea is one of those experiences that seems almost too surreal. The water is milky blue and almost completely devoid of life. Except, of course, for the tourists that flock to the region to float on one of saltiest, and most incredible bodies of water in the world. With legends of the near-magical healing properties of the mineral-rich mud found in the Jordan Dead Sea, it’s no surprise that countless resorts and spas have found their home along this legendary waterfront. While most people associate the Dead Sea with Israel, the Dead Sea is actually situated between Jordan and Israel. And if you’re looking for the perfect place to float in the Dead Sea, I think Jordan is where you should go!

This post may contain compensated links. Find more info on our disclaimer. 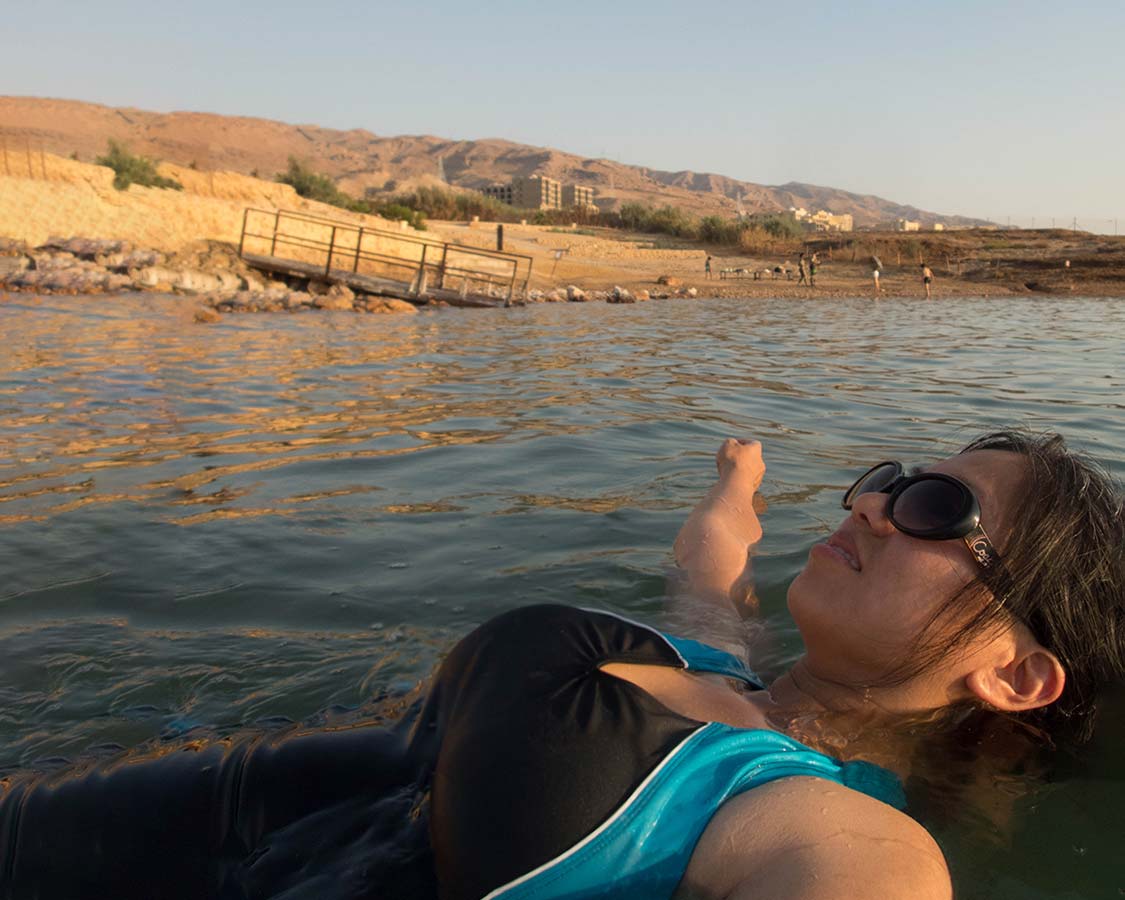 How Do You Float on the Dead Sea in Jordan?

Arriving at the Dead Sea in Jordan is pretty spectacular. The ride along the barren coast is stunning, offering a glimpse into how this area received its name. The Dead Sea is the lowest point on the surface of the Earth. The Dead Sea is situated at 429 m (1,407 ft) below sea level. It is 304 m (997 ft) deep, 50 km (31 mi) long and 15 km (9 mi) wide at its widest point. The Dead Sea water has a density of 1.24 kg/l, which makes floating a breeze. In fact, it’s almost impossible to sink in the Dead Sea. 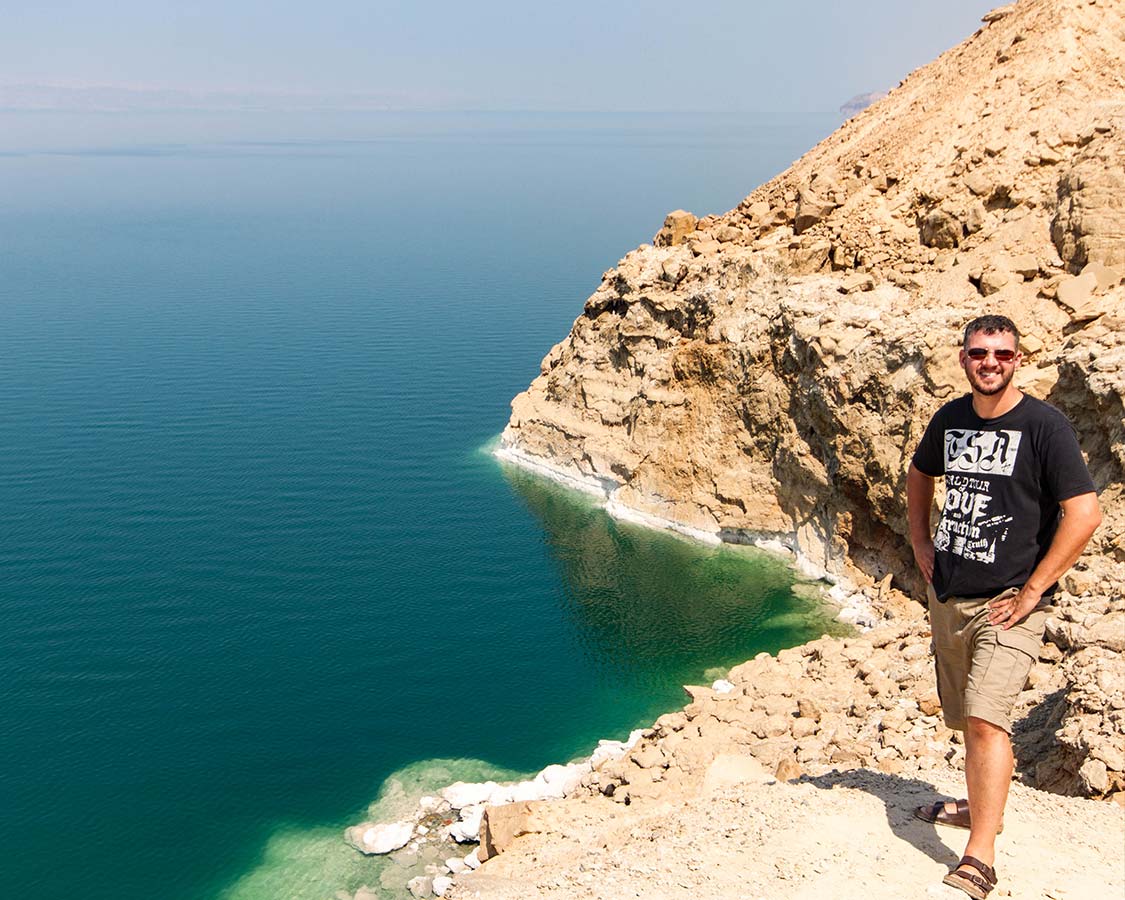 Bathing in the Dead Sea Mud

Bathing in the Dead Sea Mud is seen by some as an almost religious experience. And families flock in droves to the shores of Israel and Jordan to partake in this. There was no way we could travel all the way to the Dead Sea in Jordan and not get ourselves muddy and see for ourselves! But what is the process for getting the baby soft skin promised by floating on the Dead Sea and Bathing in the Dead Sea mud and minerals? Well, thankfully there are signs posted near most of the resorts and public areas breaking down the guide to maximizing the benefits of Dead Sea Mud.

It sounded simple enough, so off we went to accomplish Step 1. But that is where we learned one of the biggest lessons about the Dead Sea. 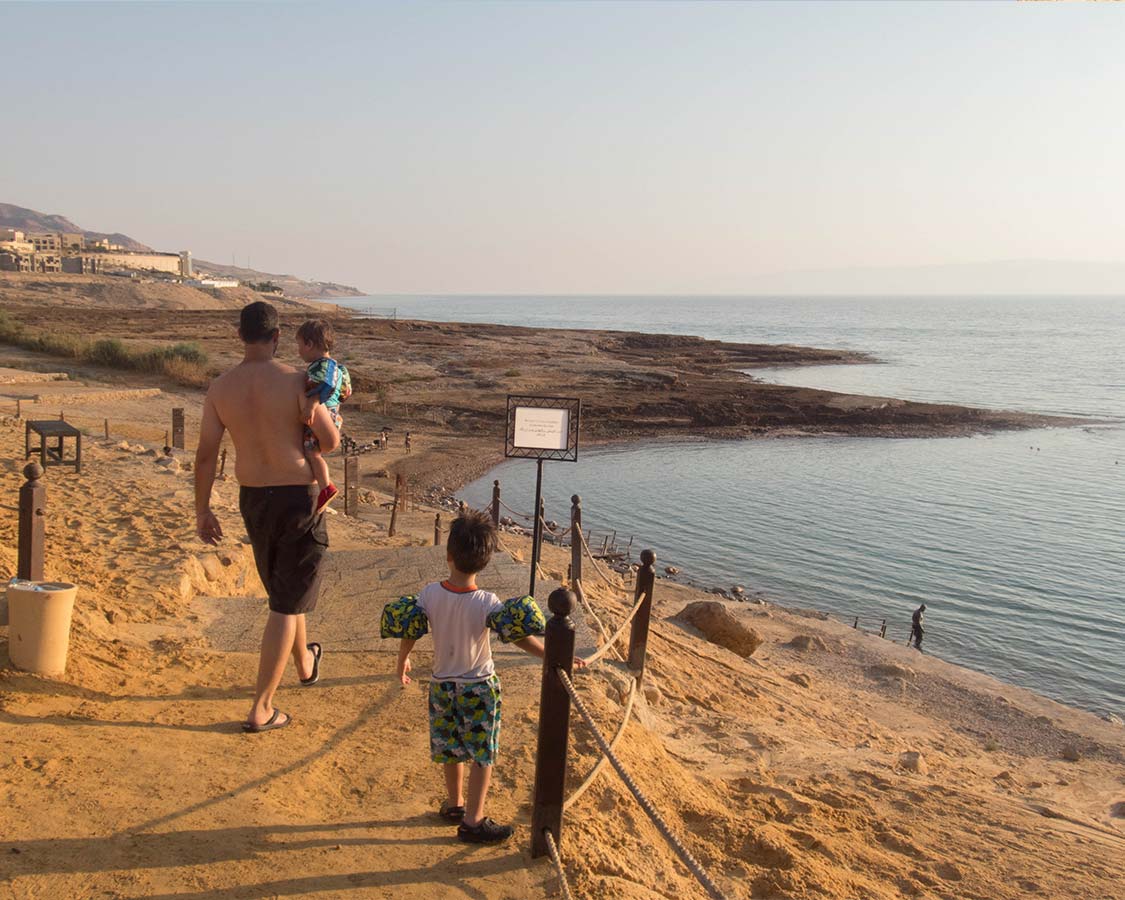 Bathing in the Dead Sea means subjecting any cuts and scratches you may have received on your travels to salt. Lots of salt. And if you’ve ever heard the term “pouring salt on a wound”, a swim in the Dead Sea will remind you just how poignant that statement is! Any scratches or cuts will hurt. It is also very important to keep the saltwater away from your eyes, as it will make for a very uncomfortable burning sensation. You also need to make sure that the salt water doesn’t go into your mouth because it tastes terrible. Trust me on that one! 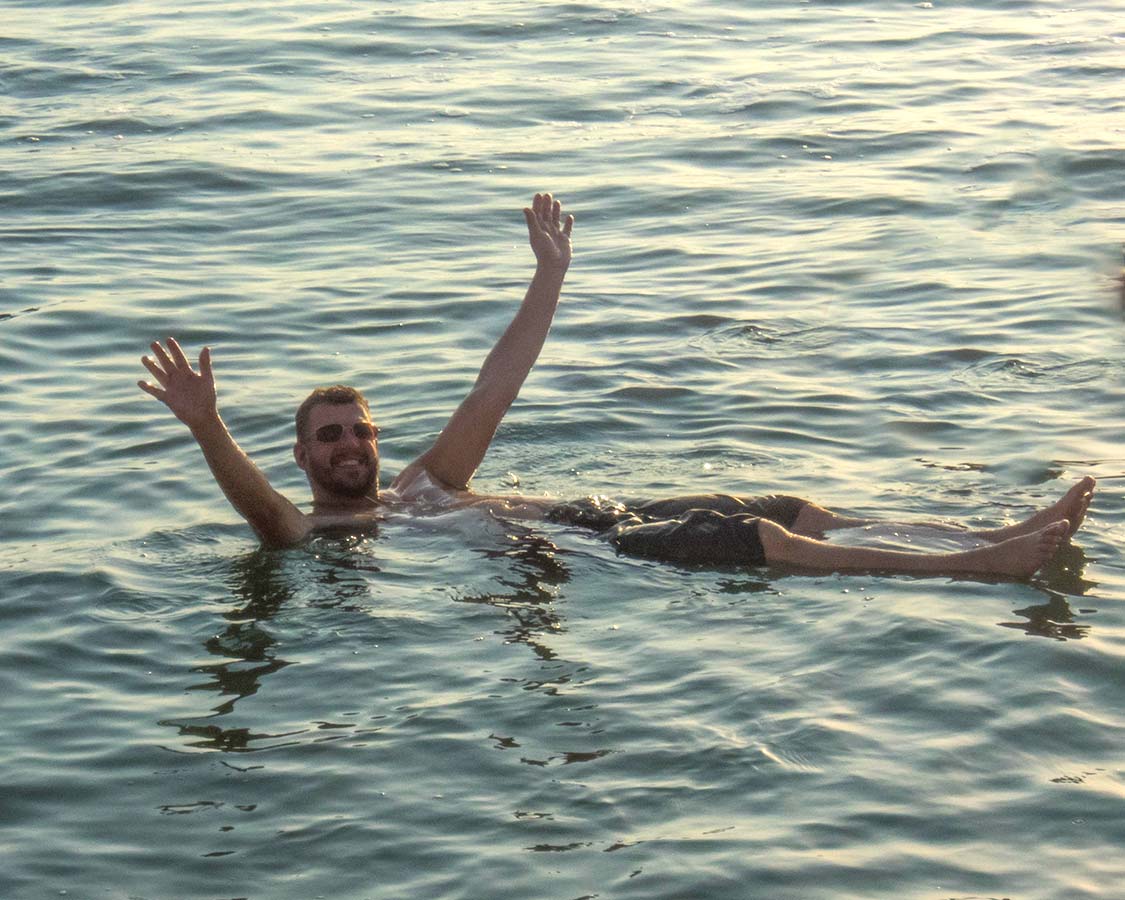 Kids in the Dead Sea

Our boys dipped their toes in the water of the Jordan Dead Sea but quickly assessed that they would prefer to just play in the mud. Between cuts and scratches, and D’s eczema, the experience for them would be too painful. It’s best to let children decide for themselves if they want to partake. The discomfort of the water fades quite quickly, but it could be enough to ruin the Dead Sea experience for children. 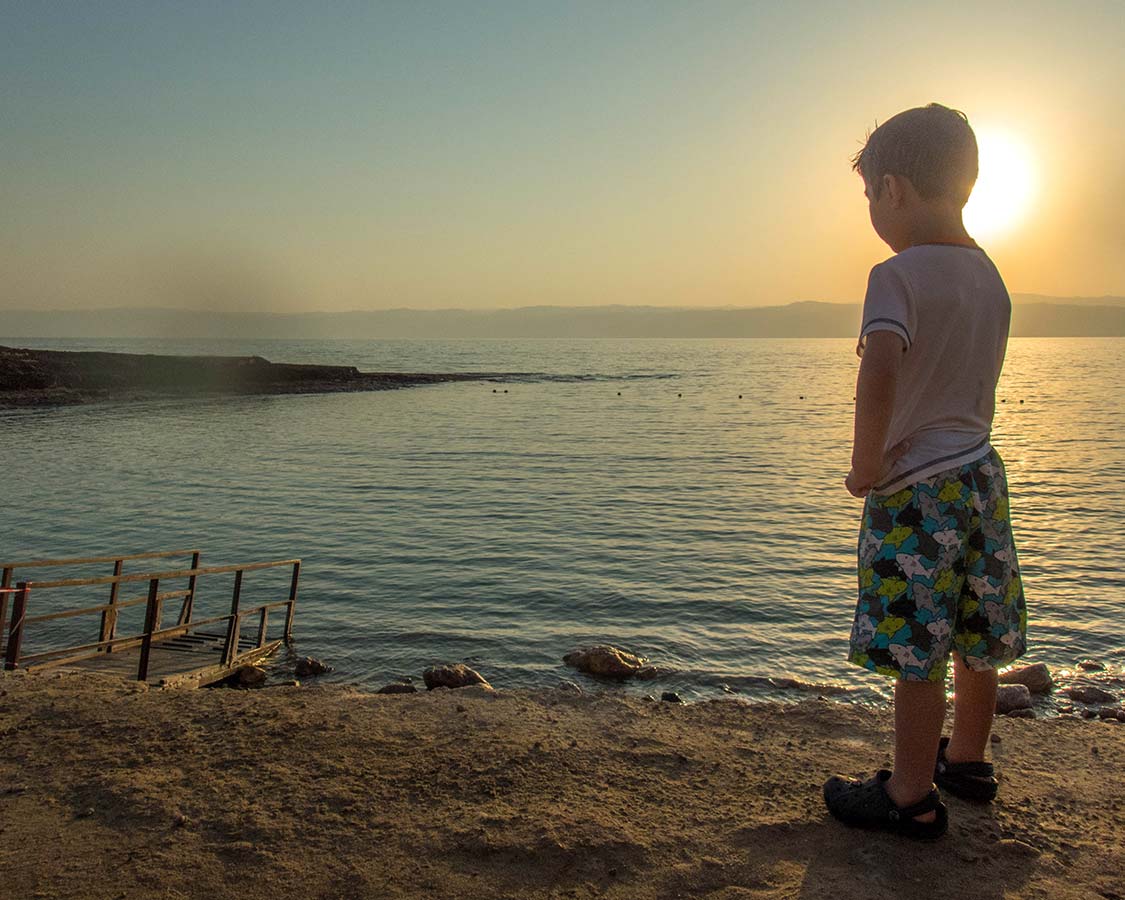 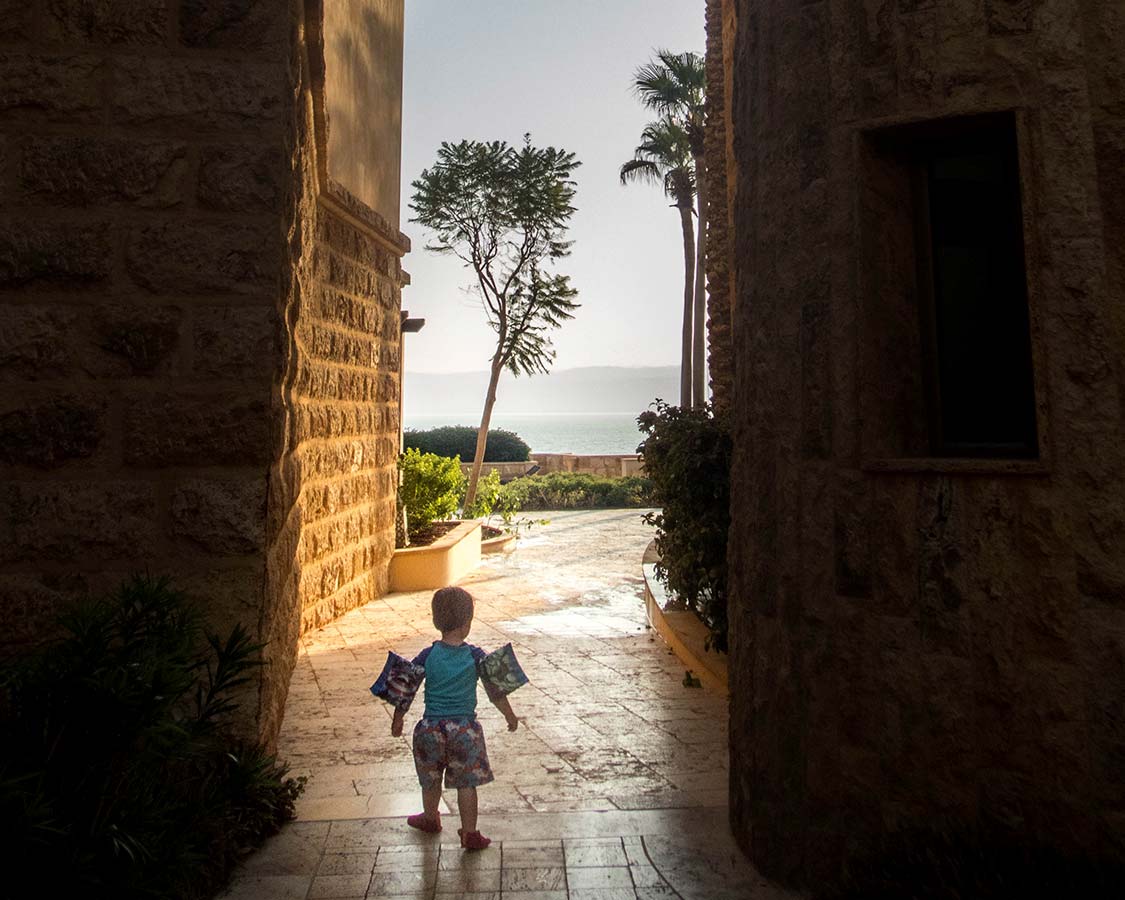 Due to its popularity, there are lots of great Resorts and Dead Sea Hotels in Jordan. Some of our favorites include:

This was our Dead Sea hotel in Jordan, and it was fantastic. There were multiple pools, including some that were set aside for others, and others that were designed just for families. The food and service were incredible, and access to the Dead Sea water is accessible via a short walk to the beach area. You can read our full review of the Kempinski Ishtar Dead Sea Resort here.

The Movenpick is arguably the most popular Dead Sea Resort in Jordan. It stands true to the Movenpick brand offering great service and fantastic amenities. It offers a wonderful Arabic style that gives it an authentic feel that other resorts do not. But it still offers incredible pools, great food, and of course, amazing sunset views of the Dead Sea.

The Holiday Inn Resort Dead Sea has an incredible pool and common area and modern rooms that will make any family stay in the Dead Sea of Jordan a treat. The views of the water are fantastic, and of course, the food will leave you smiling.

Best Things To Do Near The Dead Sea Jordan

After a relaxing day lounging by the waters of the Red Sea in Aqaba and enjoying the pools of Blu Radisson in Tala Bay, Aqaba, we began our Dead Sea Jordan adventure. From Aqaba, the drive to Swemeiah on the Dead Sea is an easy 3.5-hour drive along the aptly named Dead Sea highway (Highway 65). Along the route, there were some absolutely unforgettable things to see near the Dead Sea in Jordan.

On route, we stopped for a view of the magnificent Wadi Mujib Nature Reserve. The reserve is located in the Wadi Mujib gorge and at 410m below sea level, it is the lowest nature reserve in the world. It extends to the Karak and Madaba mountains rising up to 910 m above sea level in some spots. The variation in elevation contributes to the variety of plant and animal species that can be found in the reserve. Wadi Mujib offers many hiking trails where you can see beautiful waterfalls and natural pools. Entry to Wadi Mujib is limited to those over 18 years of age so we were not able to participate this time, but it gives us a good reason to return to Jordan in the future! 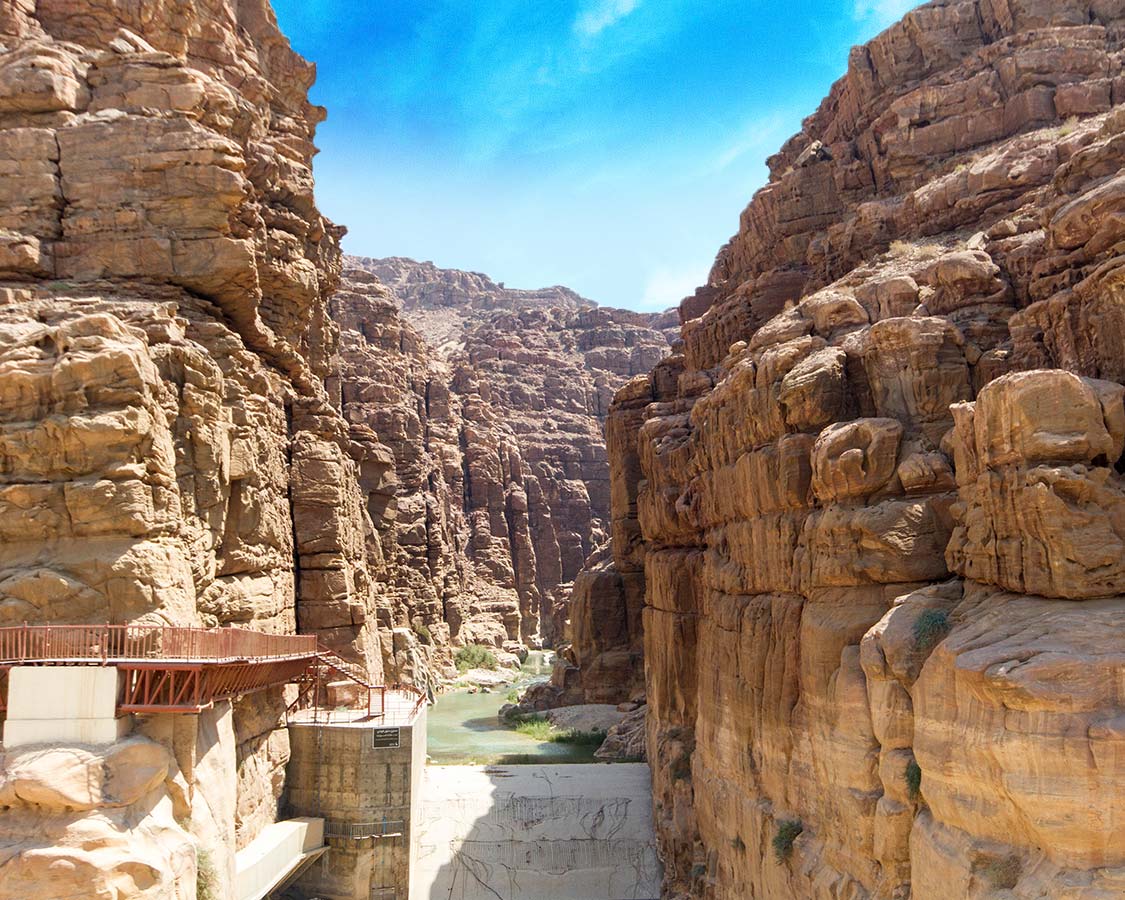 Recently added to the UNESCO world heritage list, Bethany-Beyond-the-Jordan (Al-Magthas) lies at the end of the Jordan Valley near the Dead Sea. Bethany-Beyond-the-Jordan is believed by archaeologists to be where John the Baptist performed the baptism of Jesus Christ. Many religious scholars also believe it to be the site where the prophet Elijah ascended into heaven. Due to the source of the Jordan river being choked off, and the water being diverted several hundred meters from the original site, the actual baptism site looks more like a small green pond at the base of some stairs. No matter your religious affiliation, being in a place like the Jordan River Baptismal Site is a truly humbling experience. 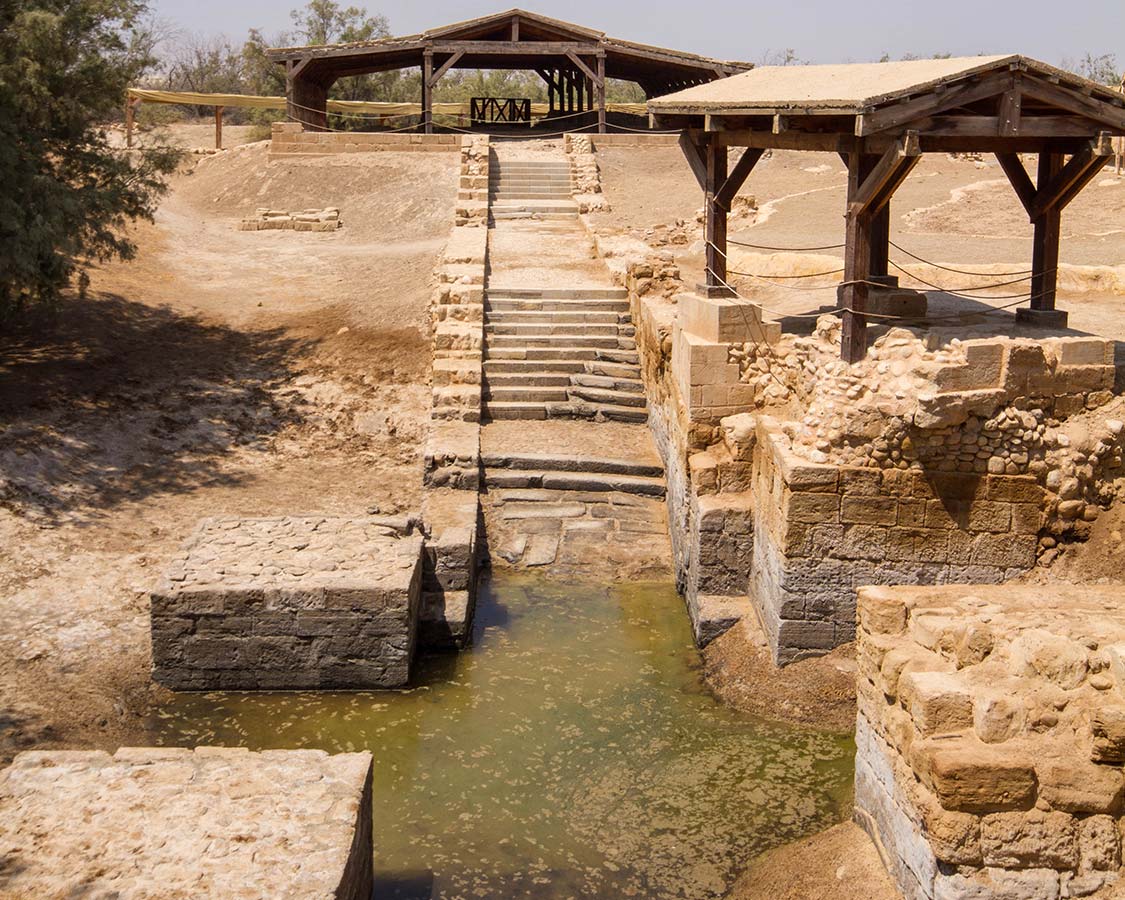 To visit Bethany Beyond the Jordan we had to join a guided tour. Private vehicles are not allowed near the ruins in order to preserve the site as well as to add to the solemnity of the experience. Shuttle buses depart from the parking lot beside the ticket office every 30 mins. The buses are often full or over capacity and there can be a rush for the limited seats available.

The site has only been accessible to the public since 1996 when the 1994 peace treaty between Jordan, Israel and the Palestinian Territories paved the way for the clearing of landmines that had been dispersed in the area. Archaeologists have since unearthed church ruins, caves, extensive wells and several baptism pools. All of these taken together, along with excerpts from the bible and other ancient text lend support to the claim that Jesus was baptized on the east bank of the Jordan river. This claim was sanctified by Pope John Paul II when he visited the site in 2000. 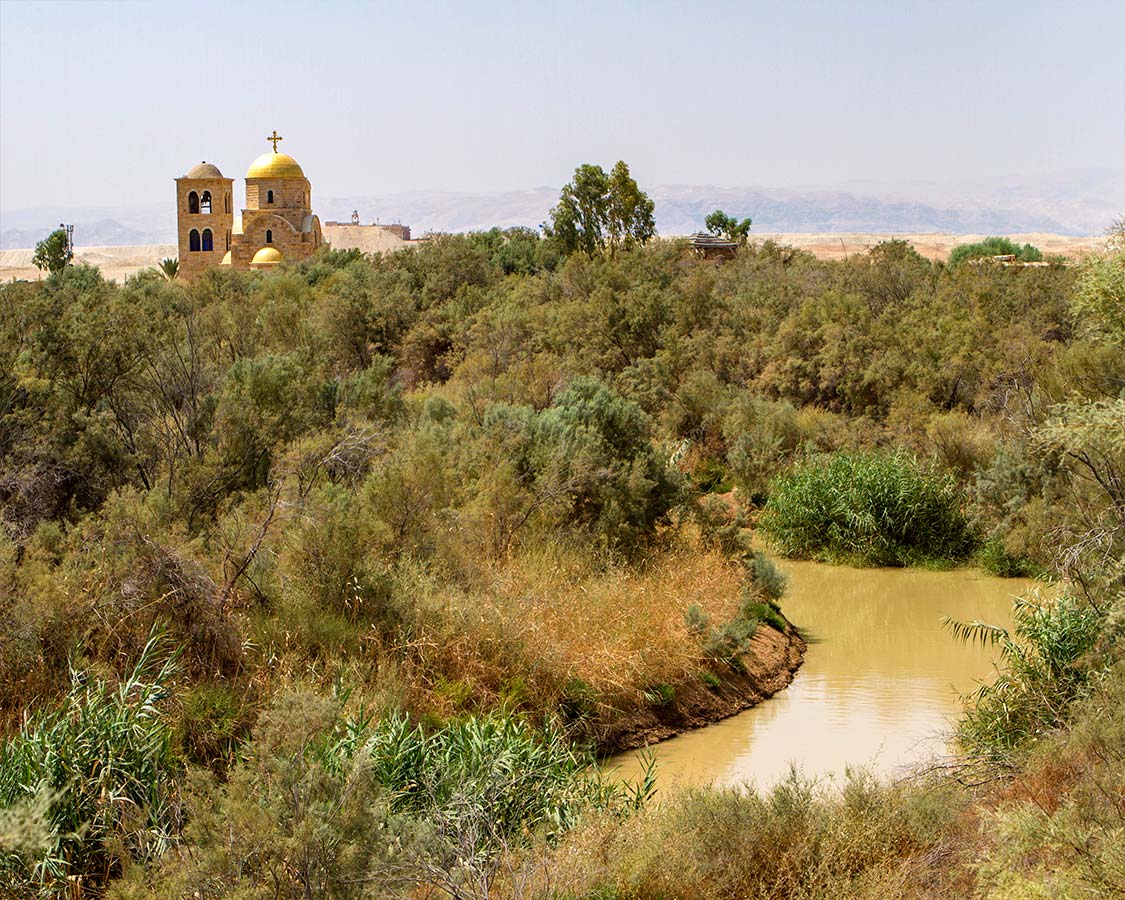 We took our time to traverse the paved pathway through the various archaeological sites. With the temperature hovering over 40ºC we kept a conscious effort to remain hydrated. After about an hour, we reached the gold-domed Greek Orthodox Church which is dedicated to St. John the Baptist. A short walk away down a bricked walkway lay the banks of the Jordan river. A baptismal font sits in a covered structure right before the bank where one could be baptized if they were accompanied by a priest and made the arrangements prior to arrival. Baptism on the river itself is not encouraged in Jordan due to high levels of pollutants. 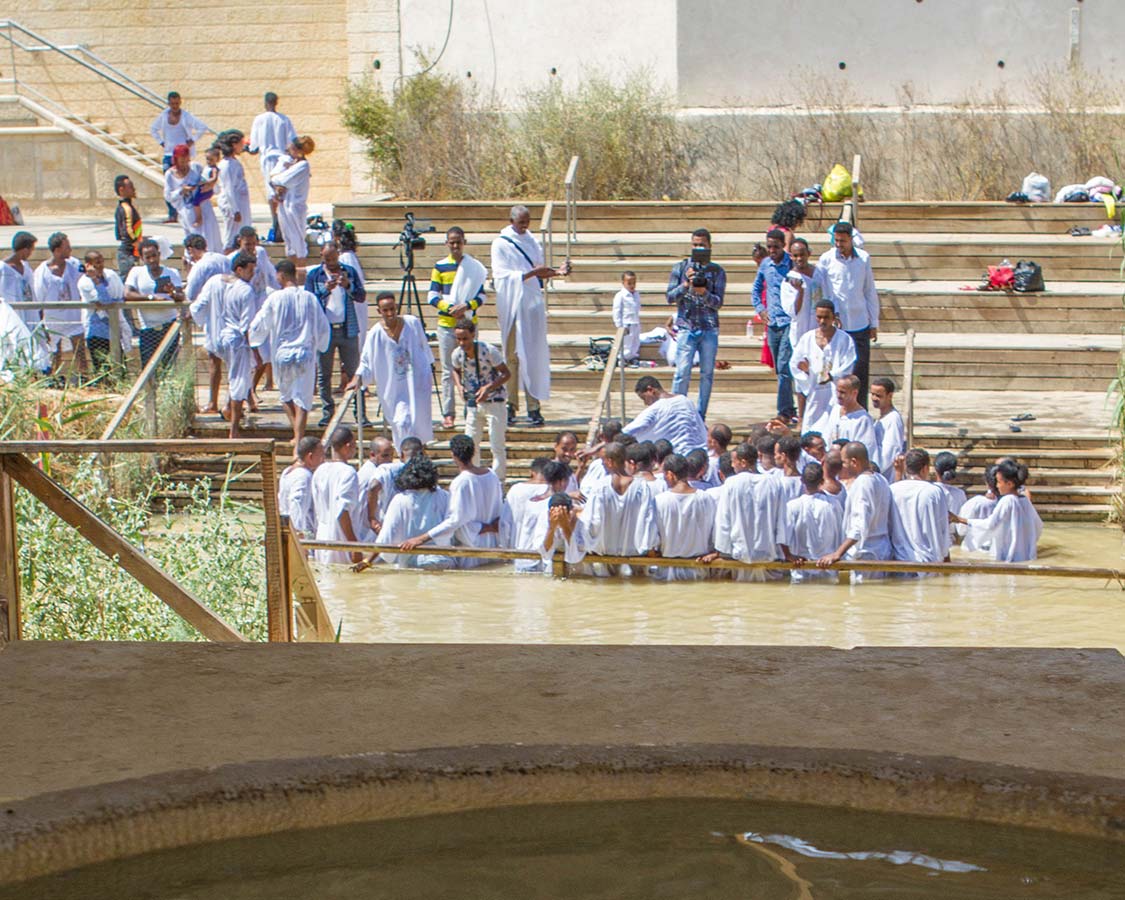 We quietly took off our shoes and socks, even the children seemed to instinctively appreciate the solemnity of the place. We joined the Jordanian military guards on duty patrolling the quiet border and sat on the banks on the east river to watch the throngs of people, young and old, all clad in white, who were being baptized on the west bank of the river. Many visitors purchased rosaries and other religious items from the Greek Orthodox Church and proceeded to dip them in the river where our toes were promptly nibbled on by small fish hiding beneath the waters. After some time for quiet reflection, we slowly made our way back to the bus stop filled with a kind of inner peace. 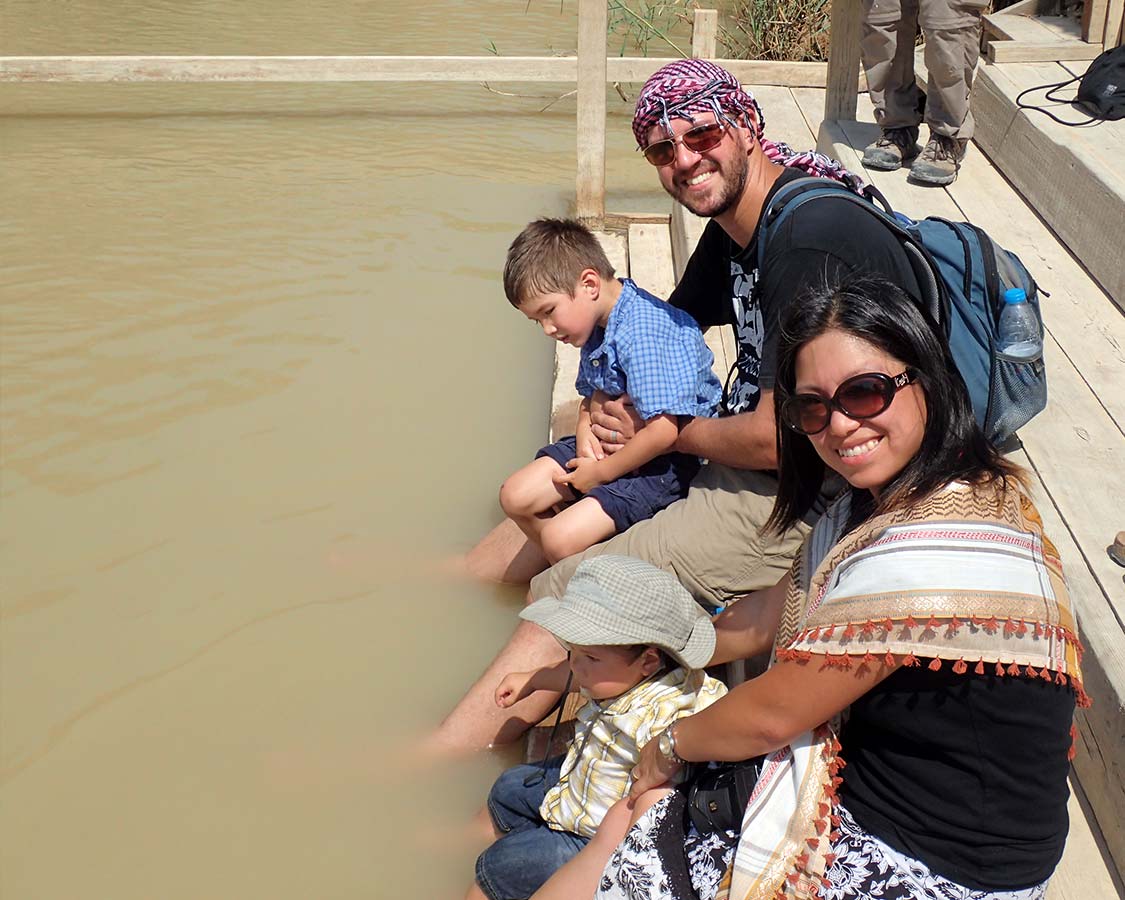 Al Karak is an ancient Crusader Castle located along the King’s Highway in Jordan. It can be easily visited as a day trip from the Dead Sea. The castle features multiple levels and underground tunnels that make exploring a lot of fun. What makes this castle even cooler is just how many battles were fought here. For history buffs, or those looking to spark some medieval imagination, it’s a fantastic stop. You can read more about Al Karak and some of the other amazing castles in Jordan here. 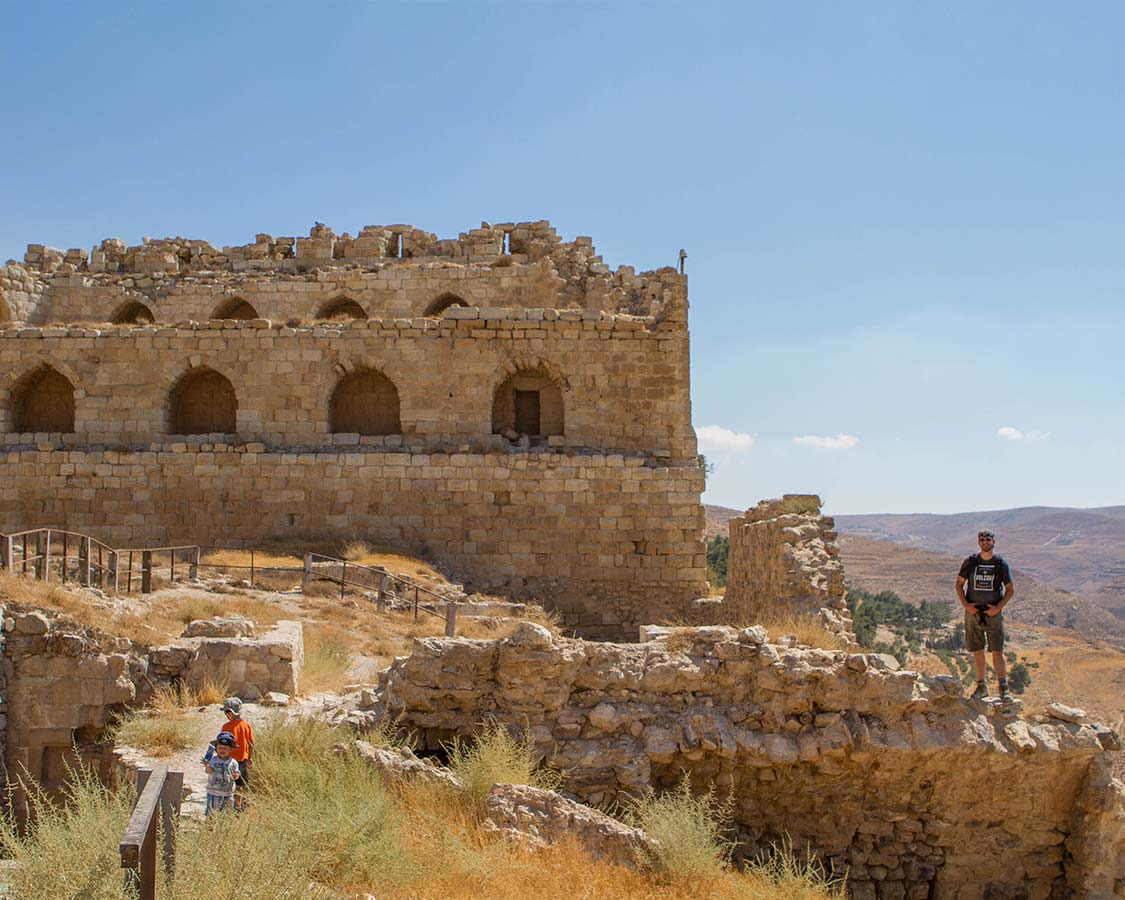 Get Muddy in the Dead Sea!

You didn’t think we’d go all this way and stop at floating on the Dead Sea, did you? Of course, we all got muddy. Because if there is one thing that kids will LOVE about the Dead Sea, it’s spreading that gooey mess all over their bodies.

At the end of our bathing, the Dead Sea did not disappoint. Our skin felt as smooth as a baby’s bum. It’s sad to think that the Dead Sea is disappearing, dropping nearly 80 cm each year due to its water sources being choked off for various projects along the shores. The Jordanian government with the support of Israel have proposed several solutions that would divert water from the Red Sea to the Dead Sea. Here’s hoping it works so this treasure isn’t lost forever.

Desert Castles and the Amman Citadel.

How To Experience Petra, Jordan with Kids

8 Amazing Experiences for Kids in Jordan

Glamping Life at a Bedouin Camp in Wadi Rum 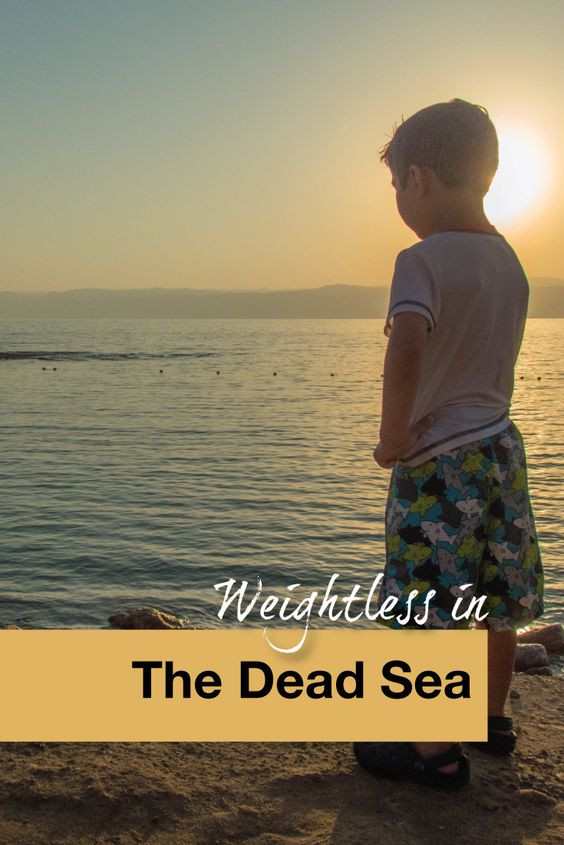