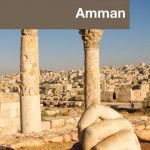 On our last day in Jordan we explored the Desert Castles and the Amman Citadel.

We had such a relaxing time floating on the Dead Sea the previous day, that even with the lure of three desert castles on today’s itinerary, we couldn’t blame the children for wanting another chance to jump in the beautiful pools of the Kempinski Hotel. We were already 1 hr late for our pre-arranged meeting time with our driver, Qais Bader of Jordan Select Tours. We contacted him on the company provided cellphone to let him know we would be at the lobby shortly.

As usual, he was more than accommodating. With adventure and excitement waiting, we pulled our wrinkled toes from the pool, had quick showers, packed up and headed to the lobby. This would be our last tour day as we would be flying back home tomorrow. On the agenda today: Desert Castles and Amman.

The Desert Castles refers to a group of historical ruins scattered on the eastern desert of Jordan. The ruins include castles, forts, baths, caravan inns and fortified palaces which all belonged to the Umayyad dynasty. There are at least 10 desert castles that can be visited, and of those, we visited the 3 most popular ones: Qasr Kharana, Qasr al-Azraq, and Qasayr Amra.

Our first stop of the day was Qasr Kharana. Of all the desert castles, it looks the most like a castle. However, there is no evidence that the castle was ever actually used as a fort. In fact, the “towers” on the corners of the castle which look to have slits for launching arrows, are actually solid, which meant soldiers couldn’t have accessed the inside to mount a defense.

It’s thought that the castle was probably a meeting place or may have even been a private residence. The castle is two storeys and both the lower and upper floors can be easily explored. The courtyard was surrounded by about 60 rooms and the children enjoyed wandering around the maze-like corridors spotting ancient graffiti. Although the structure looks massive, the interior is not as big as would be expected due to its very thick walls.

After about an hour of exploring, we got back in the van and headed to the town of Azraq. Once an oasis in the eastern desert of Jordan, much of the water has now disappeared after being diverted for use for the surrounding farmlands and to supply the city of Amman. Recent efforts by the government have restored about 10% of the wetlands;

The Azraq basin was originally 12,710 sq km. To show our support for the restoration project, we stopped for a peek at the Azraq Wetland Reserve. There were other bird watchers at the reserve, however, due to the heat, we decided to cut our visit to this area short. So, off we went to our next stop, the Qasr al-Azraq desert castle, where we chased the ghost of T.E. Lawrence.

Qasr al-Azraq was the former headquarters of T.E. Lawrence (also known as Lawrence of Arabia) during the Arab Revolt (1917-1918). Originally three stories high, the castle is constructed out of black basalt stone. The entrance door is made out of two slabs of stone and is still fully functional.

Near the entrance door, C and D spotted a game that had been carved onto the paving stones by bored soldiers attempting to pass the time during long desert shifts. They picked up some pebbles and enjoyed making up their own rules about what needed to be done to win. Both children were declared the winner, and then we were off exploring.

Our first stop would be T.E. Lawrence’s room which sits directly above the entrance.  The room offered sweeping views of the surrounding countryside during the Arab Revolt. There were also several other residences, storerooms, stables, a prison, and a mosque that could be visited. We then ran into another slab door said to weigh 3 tons. It led to the west tower. Of the door, Lawrence wrote in his book The Seven Pillars of Wisdom how it “went shut with a clang and crash that made tremble the west wall of the castle”. Try as we might, we just couldn’t budge the massive rock.

After our visit to Qasr al-Azraq, we headed off to our third and final desert castle, the UNESCO world heritage site, Qusayr Amra. Qusayr means little castle and the remaining structure was originally part of a much larger complex composed of a caravanserai, bathhouse, and hunting lodge. In fact, had it not been for the amazing 8th-century frescoes, Qusayr Amra could have been easily explored in five minutes.

The entertaining gatekeeper showed us around outside the main structure where the children enjoyed trying out the reconstructed well as the gatekeeper explained the history of the site to us. Upon entering the main building, we were greeted by frescoes of bare-breasted women holding bowls.

This is thought to be the audience hall where meetings and parties were once held. A small doorway on the left-hand side leads to the baths where we explored three other rooms. One room, the caldarium, had a domed roof that depicted what is believed to be the oldest map of the northern hemisphere with the zodiac signs added in. After exploring the desert castle for an hour, we headed back to the van for some much-needed lunch.

We stopped at a restaurant for some delicious maklouba, a traditional Jordanian dish made with rice and chicken. Then, we were off to Amman to visit the Amman Citadel. The Citadel is located in one of Amman’s seven hills aptly called Citadel Hill (Jabal Al Qala), right in the middle of downtown.

In fact, the towering columns of the ruins of the Temple of Hercules, re-erected in 1993, can be viewed from many vantage points downtown. The children enjoyed pretending to have Herculean strength by trying to move the massive pieces of broken columns that lay strewn about. You can easily imagine how grand the Temple must have been, especially when you see the giant hand of Hercules on the ground. The hand is all that remains of a 13 m high statue of Hercules that sat within the towering Temple of Hercules.

While walking through the site our guide pointed out the various Amman neighborhoods. We also had a great view of the Roman amphitheater, which we were supposed to visit next but it was closed due to a performance. Further along on Citadel Hill, on the upper terrace, we explored the Umayyad Palace.

The palace has undergone extensive renovations since the late 1990s and it has not been without controversy. The plaster, used on the inner wall details, for example, is a different color than the rest of the wall, and the detail work is of a far lower craftsmanship than the original, making the restoration quite obvious. After exploring the palace complex, we meandered slowly back towards the entrance so as to catch a glimpse of the sunset over the citadel.

The sun was starting to set and so our Jordanian adventure was coming to a close. Tomorrow, we would hop into the van one last time so that Qais could bring us to the airport for fond farewells to good friends and a spectacular country.

Thanks for the kind words!

Hi - I am planning a trip to Jordan for March 2020 and the Desert Castles is on my list. Your review and pics are wonderful. Can you let me know which tour you took with Jordan Select Tour - was a pre-set one they offer, or a personalized one for you? Thanks!

Jordan Select was able to completely customize our itinerary. We were even able to visit a rarely visited one that we learned had opened as we were on the road.

I am so glad to see visitors to Jordan getting out and visiting places that most Jordanians do not even see! While the big draws are amazing, I love that you took the time to visit the lesser known places in Jordan

Jordan has so much depth. I really feel you could spend a lifetime exploring and still not see it all.

I would love to visit Jordan. My mum lived there for a bit as a girl and my Grandma started the first brownie guide pack there. It's a beautiful place - lovely to see it works for kids too