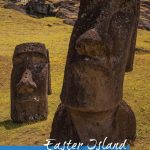 Isla du Pascua has one of the most isolated populations in the world. Come with us on a spectacular Easter Island photo journey.

Hanga Roa is the capital and only city on Easter Island. This tiny city hosts the majority of the island’s population of 5,800 people. Around 60% of the island’s population are Rapanui. The town has a hip vibe with excellent restaurants, quaint lodgings, and refreshing cafes to help visitors settle into this isolated island. Just outside the town lies a replica of the famous Moai that demonstrates how they would have looked in their original condition, gazing inland, before they were toppled during clashes between island clans.

The marina in Hanga Roa offers a glimpse of the local fishing lifestyle. The waters surrounding Easter Island are teeming with life, and the abundant fish population helps to sustain the island’s human inhabitants. Visitors to the island can be treated with incredible seafood platters at the local restaurants.

As we continue our Easter Island photo journey, we visit the famous Rano Raraku, otherwise known as The Quarry. This is where the Rapanui created the incredible moai that would grace the shores. This volcanic crater on the far east of Rapa Nui contains the volcanic ash the locals carved to create 95% of the mystical monolithic sculptures that guard the island.

Over 397 moai remain on the outer slopes of Rano Raraku, many still partially buried by the shifting soils, while others lie broken in a reminder that even great sculptors have bad days.

The view of these massive stone figures in various states of completion and disarray gives evidence to the massive amount of labour involved not only in sculpting these tremendous figures, which often consisted of not only the heads but shoulders, torsos and sometimes down to hips, but also of the work needed to bring these completed sculptures down from Rano Raraku to their final place of display on the shores of Easter Island.

One of the most interesting moai found within Rano Raraku is Tukuturi. This moai is unique due to its bearded appearance, and the fact that it was placed inland and is sculpted to represent a kneeling figure.

Ahu is the name given to stone platforms found throughout Easter Island. With 15 moai, Ahu Tongariki is the largest ahu found on the island. Like many of the moai on the island, those at Ahu Tongariki were knocked over during the island’s civil unrest before western explorers happened upon the island. In the 1900s, the ahu and sculptures were washed inland by a tsunami but have since been re-erected in their original place facing the sunset during the Summer Solstice.

Nearby to Ahu Tongariki is the so-called “Travelling Moai”. This moai was given this name after wandering more than any other of the moai. It first made a trip from Rano Raraku to Japan where it was displayed at the World’s Fair and was used by western explorer Thor Heyerdahl, to determine how the locals moved the moai from place to place.

Ahu Te Pito and Rano Raraku were the only two areas of the island which had moai still standing during the beginning of western influence on the island, but this location is not to be missed for another important and mystical reason. While the locals name for the island, Rapa Nui, is believed to translate to the “Navel of the World”, this area of the island is also commonly associated with the same phrase. It contains a very special rock that some claim lets off a magnetic force.  Whether you feel it’s power or not, it’s a beautiful location and a great spot to stop and relax.

One of the more unique items on our Easter Island photo journey is Ana Kai Tangata. Ana Kai Tangata is a famous cave on Easter Island that is known locally as “The Painted Cave”.  This cave is easily accessible from Hanga Roa and it is believed to have been an ancient meeting place, or place of teaching on the island. The cave features paintings of birds drawn using natural earth pigments and animal fat. Unfortunately, the environment of the cave has led to them being rendered very difficult to see, but they are worth a visit.

Makemake is believed by the Rapanui to be the creator of humanity as well as the god of fertility.  Several petroglyphs depicting this deity can be found throughout the island, including areas just outside of Hanga Roa.  Makemake was also the chief god of the bird-man cult and was believed to be in the form of sea-birds. Makemake can be seen in petroglyphs in the form of a man with a bird’s head.

Orongo, on the southwestern tip of Easter Island, contains the remnants of a stone village which was the center of much of the key ceremonies during the islands later years prior to western occupation. It has several low, grass-covered buildings with rounded walls situated near the tip of the Rano Kau volcanic crater.

Rona Kau and Orongo were also central to the fascinating Tangata manu, or Bird-Man competitions that the islanders used during the later years to determine leadership. The Bird-Man was the winner of an annual competition whereupon they chose the greatest warrior from each tribe. This Tribesman would set out from Orongo to swim across through the shark-infested ocean waters to the islet of Motu Nui.

Once there, they would collect the first egg of the season of the sooty tern and then swim back to Rapa Nui. They would then have to climb the Rano Kau sea cliff and return the egg, undamaged to Orongo. The Tangata manu would be celebrated and given gifts while his clan would have sole rights to that year’s egg-harvest.

Our Easter Island photo journey concludes at Rona Kau, high above the waters of the South Pacific. We only touched the essentials of visiting Easter Island, there are more ahu and moai scattered throughout the island that are worth visiting. The island offers so much to see beyond the moai as well.

Did you feel the magnetic force of the rocks? I'm always curious:)

For long I have been fascinated by these Moai . Thanks for such an informative and detailed post on these. I dont know when I can head here but I sure would like to see them myself.

On my bucket list! The sculptures are absolutely fascinating in the pictures, they must be even better when you stand in front of them!

I have always wanted to go to Easter Island. It has always fascinated me from a young age. This is a brilliant guide. :)

Easter Island is wonderful and historical. :) I would love to go here someday, and your post convinced me that I should. You're so lucky to be able to explore the island. I've read in an esoteric book that the statues in Eater Island were big because a set of early humans was also giants. I think that's interesting.

That's a really cool myth Kat, one that I hadn't heard yet!