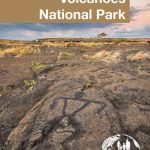 Hawaii Volcanoes National Park is an amazing destination on the Big Island. Watch an active crater, walk on the volcano floor and see land being formed!

Spending a day in Hawaii Volcanoes National Park should be on everyone’s Hawaii Big Island itinerary. This otherworldly destination on the edge of the island of Hawaii features everything from petroglyphs, lava tubes, hot springs, wildlife, and of course, one of the most active volcanoes in the world! If you can afford to spend more than a day in Hawaii Volcanoes National Park, you will have more time to explore than most people.

But 24 hours will give you a taste of all of the incredible things to do in Hawaii Volcanoes Park. So strap on your hiking shoes, and let’s check out all the amazing attractions that Hawaii Volcanoes National Park has to offer!

Before you make the trip though, make sure to check out our guide on what to pack for Hawaii. It offers tips on the right shoes, clothes, and gear to help keep you safe, comfortable, and stylish during your Hawaii travels.

Hawaii Volcanoes National Park is located on the Big Island of Hawaii. If you want to see an active volcano crater, walk-on solidified lava, explore inside a lava tube and witness land being created all in one day, this is the place to be!

The national park includes the summits and rift zones of two very active volcanoes: Mauna Loa and Kilauea. These are 2 of the 5 volcanoes that created the Big Island 500 million years ago. The youngest of the 5 volcanoes, Kilauea, last had an eruption in 2008 at the Halema’uma’u crater. Today, it’s still possible to see lava remnants of the eruption, although, lava is no longer flowing to the ocean.

At 300,000 plus acres, Hawaii Volcanoes National Park is vast with tundra varying from seacoast to lowland to rain forest and alpine. Besides the beautiful spring flowers, several types of wildlife can be spotted in the park including the Nene (Hawaiian Goose), ope’ape’a (Hawaiian hoary bat), happy-face spiders, carnivorous caterpillars and more.

The first stop of any visit to the park should be the Kilauea Visitor’s Center. There you can obtain information about the current lava flows including maps and if there are any trail or road closures for the day. They will also let you know of any ranger-guided hikes/tours.

The park is open 24 hours a day. For current entrance fees, visit the National Park website. The park can easily be explored on your own via driving on the Crater Rim Drive and the Chain of Craters Road.

However, to best experience the park, you should get out of your car and hike some of the 150 miles of trails in Hawaii Volcanoes National Park. It is also best to stick around after sunset to get a better view of the lava flows and the crater glow.

Pro-Tip: Road and area closures can change suddenly due to wind and flow strength/direction. Make sure you are aware before venturing on your own to avoid being caught in a dangerous place.

If you only have a few hours to visit Hawaii Volcanoes National Park, this is the one thing you must do. The 11-mile route passes through several scenic spots and you can get out and do some hikes.

It will also bring you to the active summit caldera. When we visited the road around the Southwest rift zone was not accessible due to toxic amounts of sulfur dioxide gas. For those that are more adventurous and have more time, it is possible to do the drive as a hike on Crater Rim Trail.

The best way to view the eruptions is from the observation deck of the Thomas A. Jagger Museum which is located in the Kilauea Caldera (Caldera: a large crater formed by a collapse). The Halema’uma’u crater is a pit crater located within the much larger Kilauea Caldera, which is 2 miles wide and more than 3 miles long.

From the Jagger Musem, the first trail we stopped at is the Sulphur Banks Trail also known as Ha’akalamnu. This is an easy trail that is paved in the first portion then is followed by a boardwalk. At less than 0.4 miles one-way, it’s a very accessible way to witness volcanic gasses seeping from the ground.

You’ll also be able to see sulfur crystals and other minerals on the rocks during your walk. Moderate amounts of sulfur dioxide and high amounts of hydrogen sulfide are released at Sulphur Banks so we were surprised to learn that previously this area was used as a health spa and sauna.

Other minerals, including gypsum, opal, and earthy hematite, formed by the weathering of the rock and the precipitation of gasses can also be found. In photos of Sulphur Banks, gypsum and opal occur as white coatings on the rocks while hematite appears as a rust-like color.

Pro-Tip: The toxic fumes can adversely affect people with heart or respiratory problems. Pregnant women and young children are advised to avoid this trail.

The descent was rocky and the ground slippery. It was mid-afternoon and as we hiked the 2.5-mile trail marked on the lava floor with ahu (stacked rocks used as trail markers), we could feel the heat emanating from the black lava. The intense heat caused us to move sluggishly and it took us over 2 hours to complete the trail. At certain parts of the floor, we could still see steam from the 1959  eruption.

Pro-Tip: Bring lots of water and snacks to keep your energy levels up as the hike can be challenging at parts. There is no shade while hiking the crater floor so you definitely need to use sunscreen and a hat.

Our third hike in Hawaii Volcanoes National Park involved going inside a lava tube! Lava tubes are formed when an eruption has stopped and lava drains from the tube through which they flow underground. Access to the lava tube is through one of the small pit craters formed at the same time as the Kilauea summit collapse.

The trailhead is located close to the Kilauea Iki overlook. You must walk through the rainforest section of the park, which is considered a special ecological zone within the park, to reach the entrance of the lava tube. The trail to the tube entrance is an easy 20-minute walk but can be slippery when wet.

The lava tube is called the Thurston lava tube after Lorrin Thurston, a newspaper publisher that played a prominent role in creating the park. It is also known as Nahuku, which in Hawaiian, refers to the small protuberances that can be found the walls of the lava tube.

The trail within the tube is 400 feet long and prior permission is needed to explore further. It descends along the wall of the crater then across its floor. The trail is well-lit but having our own headlamps allowed us to see additional details.

The Chain of Craters Road in Hawaii Volcanoes National Park can be reached from Crater Rim Drive. The road allows you to experience amazing views of the East Rift Zone. It is 18 miles long and descends 3,700 feet. At the end of the Chain of Craters Road, it is possible to do one last hike with some amazing views, such as the beautiful Holei Sea Arch.

Before reaching the end of the road, we stopped to explore the 0.7-mile-long (one-way) Pu’u Loa Petroglyph trail. The site is sacred to Hawaiians and Pu’u Loa means “hill of long life”. Approximately 23,000 images depicting the life and culture of native Hawaiians can be viewed from the trail. Please respect the site and stay on the boardwalk.

There are many other areas of Hawaii Volcanoes National Park that we did not explore. If you have more than 24 hours, you can definitely do more day hikes and even explore the backcountry. It is also possible to tour the park by helicopter!

Have you visited or thought of visiting Volcanoes National Park on the Big Island of Hawaii? What are your can’t miss places?

Hawai is love, thanks for sharing.

thanks and great info

I want to visit Hawaii so bad! The scenery and the beaches - gotta get there soon!!

It definitely lives up to its reputation! I hope you have the chance to visit soon.

Wow! Amazing. I'm very interested of sulfur banks and steam vents. I will save this because i'm planning to visit hawaii very soon...