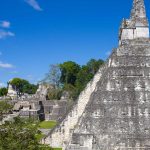 Deep in the heart of the Guatemalan jungle lies one of the most spectacular ancient cities. The Mayan city of Tikal is amazing to behold.

Deep in the heart of the Guatemalan jungle, half-buried under earth and trees sits one of the most spectacular ancient ruins on Earth. The Mayan city of Tikal, complete with housing, temples, palaces, public squares, and ball courts, is an absolute treasure to behold. One of the most incredible things about this set of ruins is its genuine feeling of authenticity. This authenticity is something that I didn’t experience in some other Mayan ruins.

Many visitors flock to Tikal from towns like Flores in Guatemala. We were exploring neighboring Belize and made the journey early in the morning from Belmopan. After a trip just shy of 3 hours, we crossed the border into Guatemala by bus. The trip included a stop at the border for passport checks and a quick snack and drink before continuing.

The Mayan City of Tikal

Tikal National Park, which contains the Mayan city of Tikal, is in the Peten province of Northern Guatemala. The park is in an area often referred to as the Maya Forest. Tikal has the distinction of being one of only a small number of UNESCO World Heritage sites protected by both cultural and natural regulations. This is due to both the incredible biodiversity of the surrounding forest and for housing the incredible Mayan city of Tikal.

The city was a major part of Mayan civilization from the 6th century B.C. up until the 10th century A.D. Tikal remains as one of the most important archaeological sites left by the Mayan people. Many of the buildings still contain the original artwork. Stone carvings, murals, and hieroglyphics can be found in many of the buildings within the site.

Pro-Tip: There are no ATMs in Tikal and vendors don’t accept credit cards. Make sure that you bring cash.

The entrance to Tikal is priced at approximately $150Q ($20 US) and the park is open from 6:00 AM until 6:00 PM. The city covers a massive area. Many of the ruins are still partially, if not completely covered in layers of dirt and jungle from a millennium of neglect, and making your way through the jungle paths to the different features can take a while. Don’t trust the signs either, they often fall and are placed back facing the wrong direction.

The Grand Plaza in the Mayan City of Tikal is one of the most famous within the city. The Grand Plaza was used mostly for ceremonial activities. Contrary to popular belief, the Mayan culture is still alive in Central America, and while we were visiting we had the opportunity to witness a Mayan prayer ritual within the Grand Plaza. Seeing this was very unexpected and we were told by the guide to be very respectful and silent around the ceremony as it is the real deal and not something put on as a display for tourists.

The Grand Plaza includes Temple 1 (Temple of the Grand Jaguar) and Temple II (Temple of the Masks). The grounds offer amazing places to explore, including residences and a ball court where the ancient and deadly Mesoamerican ball game was played. Temple II has wooden stairs, making it a relatively easy climb for children.

Pro-Tip: Temperatures in Tikal can increase dramatically in the afternoon and the Grand Plaza does not offer much shade. Make sure to pack sunscreen and lots of water for exploring.

Temple IV, also known as the Temple of the Two-Headed Snake is the tallest structure in Tikal at a whopping 70 M (230 ft). Within the Mayan city of Tikal, Temple IV is the place to be to watch the sunrise over the tropical forests. The climb up to the top involves a combination of rickety stairs built on scaffolding and the original structures uneven and crumbling stairs. The drops on all sides are steep. The stairs can be a heart-pounding experience for those who aren’t used to it. The views, though, the views are worth the effort.

Temple IV became famous for its “Star Wars” view. The Millenium Falcon could be seen shooting out from the temple peaks as it appeared as part of the rebel base during A New Hope. If you love your Sci-Fi as I do, then it’s worth the trip just for this!

Exploring the residences and tunnels of the Central Acropolis

Tikal is one of the few Mayan cities we have visited where the living quarters of the locals have been unearthed and are accessible to visitors. The temples and palaces are cool. But, there is something about laying down, where 2,500 years before, someone else slept, dreamed, and rocked their children to sleep that truly brings an ancient city to life for me. The Central Acropolis is a labyrinthian mix of residences and palaces. They are a blast to explore and offer respite from the afternoon heat.

There are countless trails that snake through the jungles surrounding the Mayan city of Tikal. Many of the trails lead to older buildings that have not been fully explored. Hiking through the jungle is a great way to beat the afternoon heat. Go ahead. Tap into your inner Indiana Jones. In addition, there is the opportunity to run into some of the local wildlife. During our hike, we saw spider monkeys, parrots, and even a tarantula! Last, there were some cool tunnels that you can crawl through beneath the forest floor.

The Mayan city of Tikal managed to capture our hearts, minds, and souls. There is something truly magical about this place that can be experienced only while visiting. The locals and guides were wonderful. The surrounding nature was spectacular. Tikal felt like an entirely new world just waiting to be discovered.

I am originally from Guatemala born and raised in small town in Izabal DPT I am in United States since the 80's I went back to my country on 2018 and to Flores Peten to enjoy the beautiful Mayan Culture, I love it. I didn't get to walk through it because it's big, but definitely I will go back.??

It’s wonderful to hear that you were inspired to go backs Tikal is a very bug City.

There is a nice hotel in El Remate about 10 miles from the Tikal gate that is reasonable clean & safe. Lacasadedondavid.com is the site. They take credit cards.

Thanks for the tip Roger!

Looks otherworldly! Loved following the incredible journey of your explorations! And even discovering the wildlife around makes it seem like a huge adventure, thanks for sharing!

I have been a student of history in my school and love to hear about ruins. the Mayan ruins have always fascinated me. I have never been here and am not sure whether I would be able to in some time soon . I do hope I get a chance to visit this place soon enough.

I just shared this with two of my friends. We take an annual girls trip and this looks like a fun idea. Especially starting out in Belize and then venturing to Guatemala.