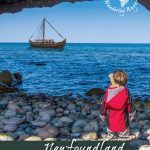 The Newfoundland Viking Trail offers the perfect combination of history, natural beauty, and fascinating culture. It’s a must see!

Around the year 1,000 CT, long before Columbus sailed the ocean blue, Vikings, sailing west from Iceland or Greenland came upon the shores of Newfoundland. Their settlement on what would become Canada’s easternmost province wouldn’t be uncovered for another millennium. As new settlements and historic sites are discovered, a pathway back in time is opening up, allowing visitors to step through history and experience the Newfoundland Viking Trail.

What is the Newfoundland Viking Trail?

The Newfoundland Viking Trail is a step back in time, taking you from the beginnings of the earth through Native burial grounds to 1,000-year-old Viking settlements all while touring Newfoundland’s glorious west coast. Beginning just outside of Deer Lake, the Newfoundland Viking trail then heads to the incredible UNESCO World Heritage site, Gros Morne National Park. Gros Morne is at the tip of the Appalachian Mountain range. It features glacier-carved valleys, lush wilderness and some of the world’s most incredible geological formations.

Then, the Viking Trail snakes along the western coast of Newfoundland, offering incredible opportunities for whale-watching. The Viking Trail continues up the coast to the northernmost tip of the island of Newfoundland where you can visit the remains of an ancient Native village and the famous Viking settlement of  l’Anse aux Meadows. The route concludes at the town of St. Anthony, where you have the chance of seeing the incredible icebergs that flow through the area during late spring and early summer.

What to see on the Newfoundland Viking Trail?

Ancient limestone rocks carved by the Atlantic Ocean helped create the incredible arches at The Arches Provincial Park along the Newfoundland Viking Trail. Not far from Western Brook Pond, The Arches Provincial Park has picnic areas and a rocky beach. You are able to walk through the arches and out into the pounding surf for a powerful experience.

Port aux Choix National Historic Site offers a fascinating glimpse into Canada’s ancient history. On this site, human habitation dates back 6,000 years. Through the ages of Maritime Archaic Indan, Dorset and Groswater Paleoeskimo and more recent Native habitation, humans have made camp on the shores of Port aux Choix to live off of the abundant sea life on its coast. The site features newly uncovered burial sites and relics such as spears and harpoons.

Discovered in 1960, l’Anse aux Meadows was the first site to offer conclusive proof of European presence on North American soil prior to the Columbus excursions of 1492. The site contains the remains of houses, a boat repair building, and workshops. l’Anse aux Meadow was likely used as an exploration camp by Norsemen from larger settlements along the St. Lawrence and New Brunswick.

A visit to l’Anse aux Meadows isn’t complete without seeing the Interpretive centre, where you can gain a full understanding of Newfoundland’s Viking Trail history.

As a family travel destination, the Newfoundland Viking Trail offers the perfect combination of history, natural beauty, and fascinating culture. It’s a destination that shouldn’t be missed for anyone looking to visit Canada’s east coast.

We really want to make it to Newfoundland! Great photos that make us want to go even more!

This looks like an amazing trail to do, the pictures are really beautiful and it seems the little guys had a blast playing Viking!

There are just so many beautiful things that I would love to see and do in Canada, should just move there for a whole year and do them all haha

This sounds like our kind of trail. Some of those views are brethtaking! As always your photos are stunning!

Love the photos what a cool experience. Thanks for all the tips and tales

Uhh I love Viking Storys...seems like a great trail to do =) Btw. your kids are adorable and those pictures are absolutly amazing...thanks for sharing this^^