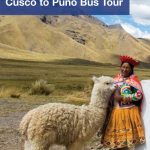 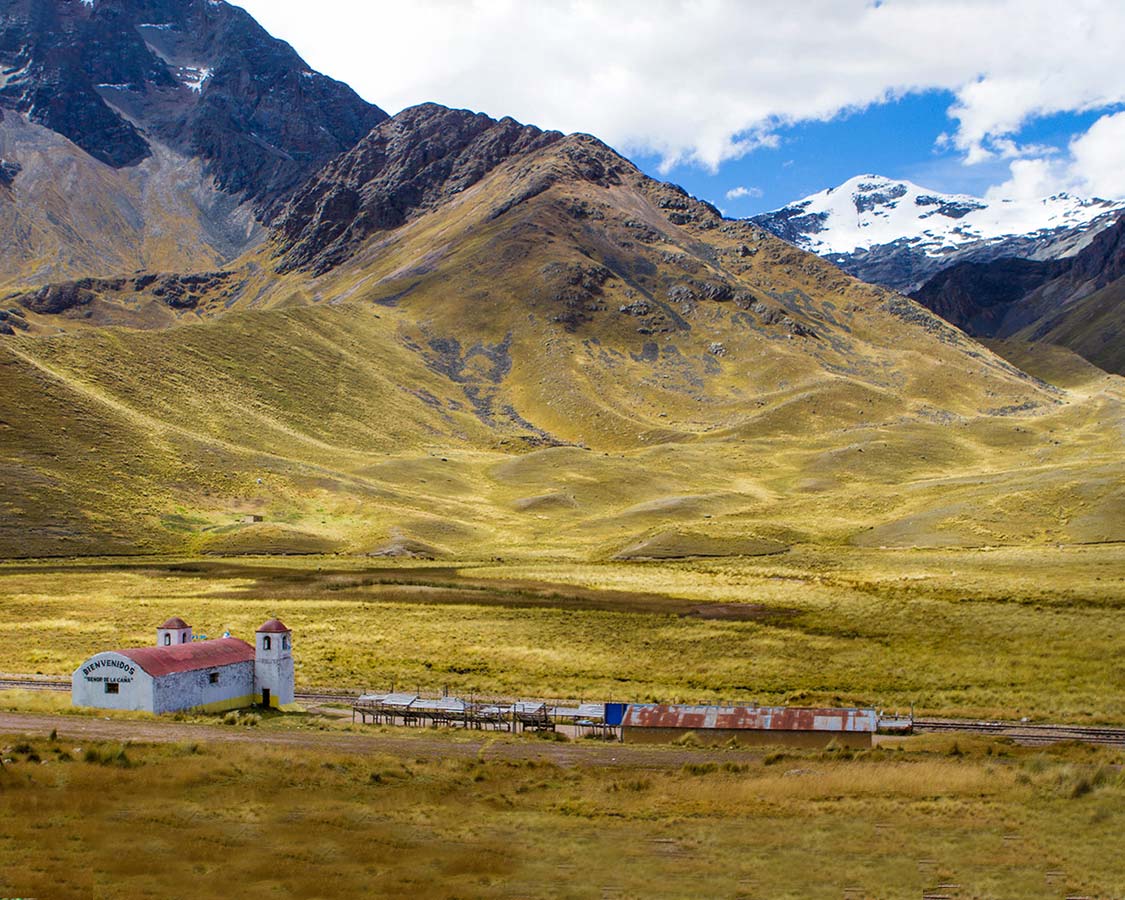 We spent a few days in Cusco and the Sacred Valley after checking off our bucket list adventure of doing a Machu Picchu tour. Next up on our South America adventure was a visit to Lake Titicaca Peru with kids. But how do we get to South America’s largest lake? It turns out that the Cusco to Puno bus with Inka Express was the perfect option for us. You can read our entire two-week Peru itinerary here. 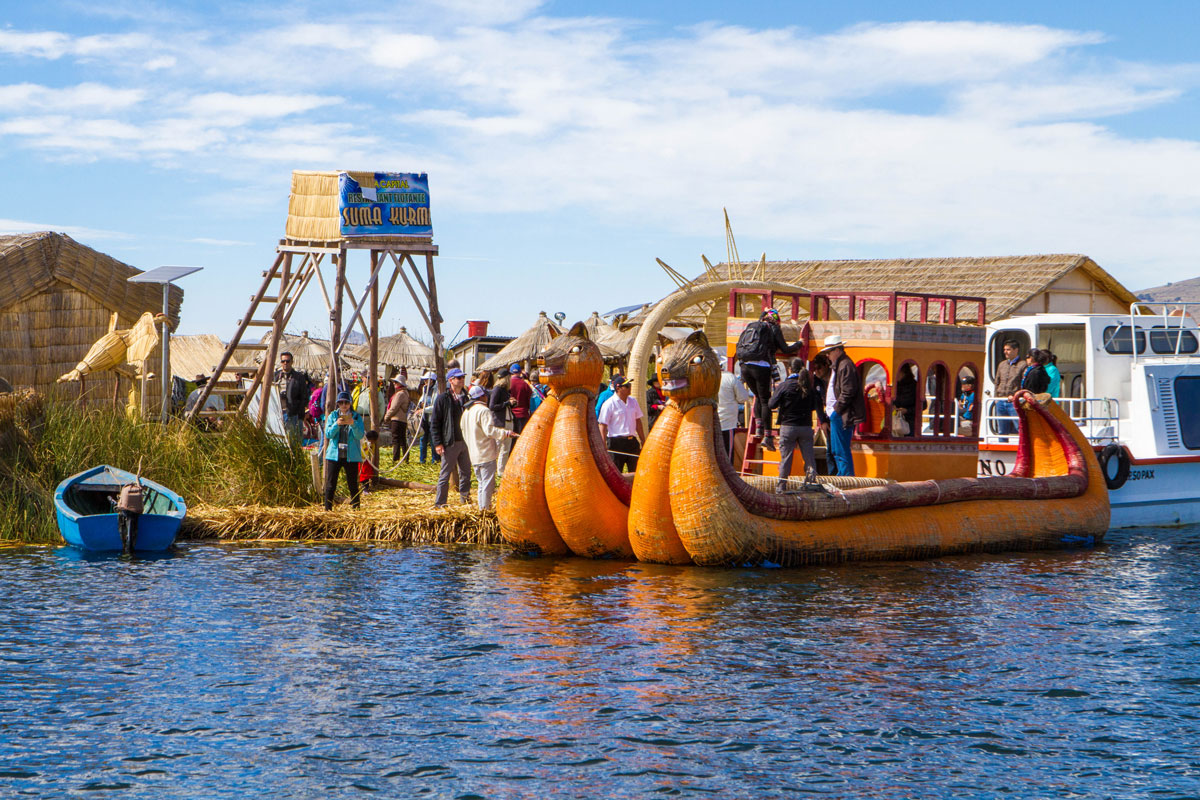 How to Get From Cusco to Puno

When Kuoda Travel suggested that we take the Inka Express tour bus with kids to get from Cusco to Puno I was very apprehensive. How would the boys do on a 9+ hour ride on a crowded tourist bus? I inquired about alternatives to the bus. There were 3 three other possibilities: private car, plane or train.

This was my first inkling as we were touring the rest of Peru with a driver. However, the cost was outside of our budget. This option would be great for avoiding tourist crowds. Private car tours are excellent since they allow you the ability to stop on demand and explore with much more freedom.

Of course, it is also possible to hire your own car and do a self-drive. This was not feasible for us as we had arrangements from Puno on. The fees we would have incurred for the one-way drop would have made the self-drive option also outside of our budget.

Option 2: Fly from Cusco to Juliaca

It is not actually possible to fly directly to Puno. Instead, you have to fly to the neighboring town of Juliaca. Although the nonstop flight is only an hour-long, time at the airport and the drive from Juliaca to Puno make this option longer than it seems at first. Although, the plane option does save some time over the bus ride. Ultimately though, we decided not to go this route as it would mean missing out on some amazing sites along the way.

Option 3: Riding the Andean Explorer train from Cusco to Puno

Taking the Andean Explorer train from Cusco to Puno would have been a luxurious way to travel. The trip takes 10.5 hours and although it follows the road most of the way, it only makes one stop. While this Cusco to Puno train might be relaxing, from a sightseeing perspective, a Cusco to Puno bus is the best option for those wanting to experience Peru.

Many buses in South America operate in a more similar fashion to airlines than what I’m used to in North America. There are various class levels from budget to luxury. But the luxury tour buses in South America are often still very reasonably priced. On top of that, they often offer high-class seating, refreshments, and even a host/hostess.

The Inca Express Cusco to Puno bus was billed as a luxury bus that provides comfortable seats and beverages. The bus did not disappoint. The Inka Express bus was clean and comfortable. The well-padded seats also reclined so the boys did not have any issues finding nap time on the road. Much to my surprise, there was also a server/hostess that traveled with us from Cusco to Sicuani (the halfway point of the trip). Another hostess joined us from Sicuani to Puno. After each stop, we were offered a beverage.

Our choices included: Inka Cola, water, coca tea or coffee. Just like in a plane, you could also ask for a beverage at any time. We encouraged the boys to drink lots so as to avoid altitude sickness. Luckily, there was no need to worry about having too much fluid either. There was a washroom on board. 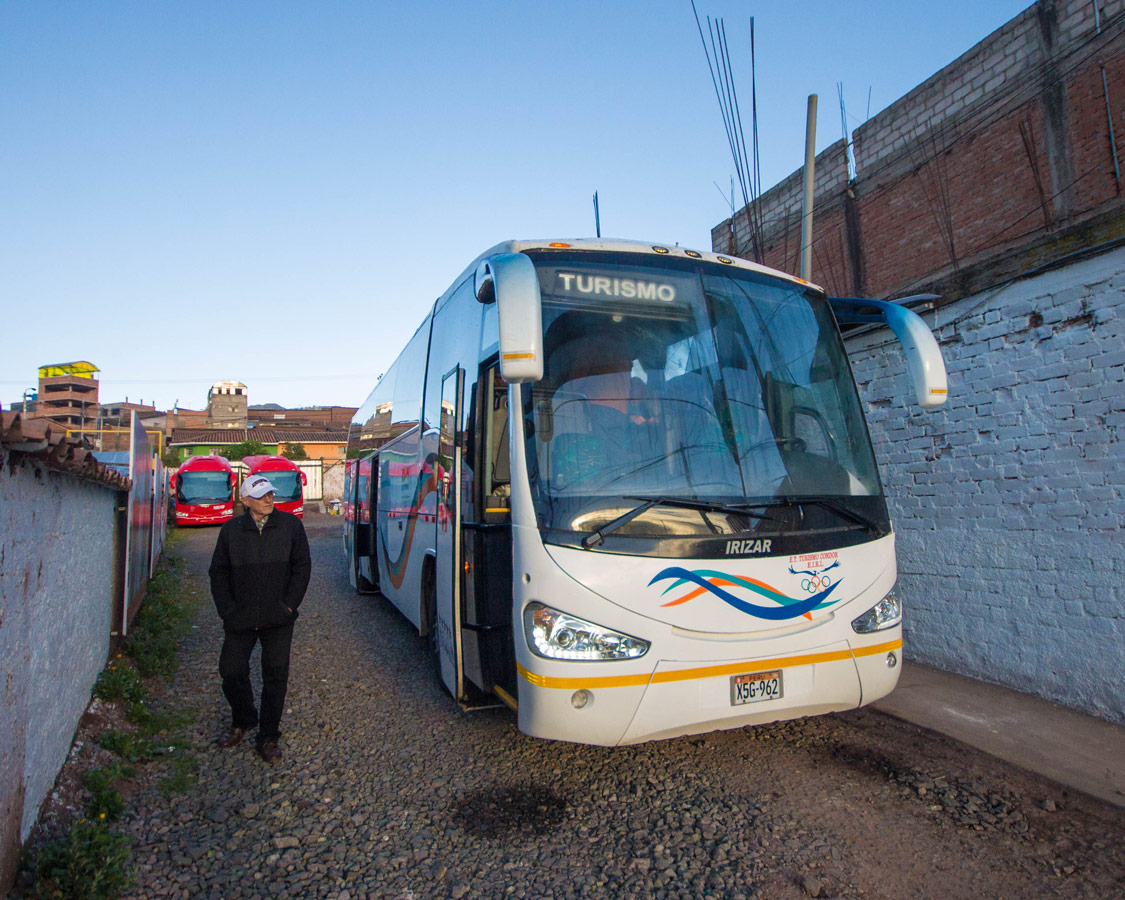 Pro-Tip: You can purchase a bus ticket that includes the entrance fees to all the stops. However, if you choose not to, it is also possible to pay for the entrance fees to only the sites you want to see on the bus. Our driver collected the fees (cash only) at the start of the trip.

The Route of the Sun: Sightseeing on the Cusco to Puno Bus

We were picked up at the hotel by 6 am to be driven to the bus station. Although we had pre-purchased our tickets, we still had to check-in at the on-site ticket office before falling in line. With assigned seating, getting to our seats was a breeze.

After going 45 km outside of Cusco, we had our first stop was in the village of Andahuaylillas. The village is known for its church, Iglesia de San Pedro, also known as the Cusquenian Sixtine Chapel or the Sistine Chapel of the Americas. 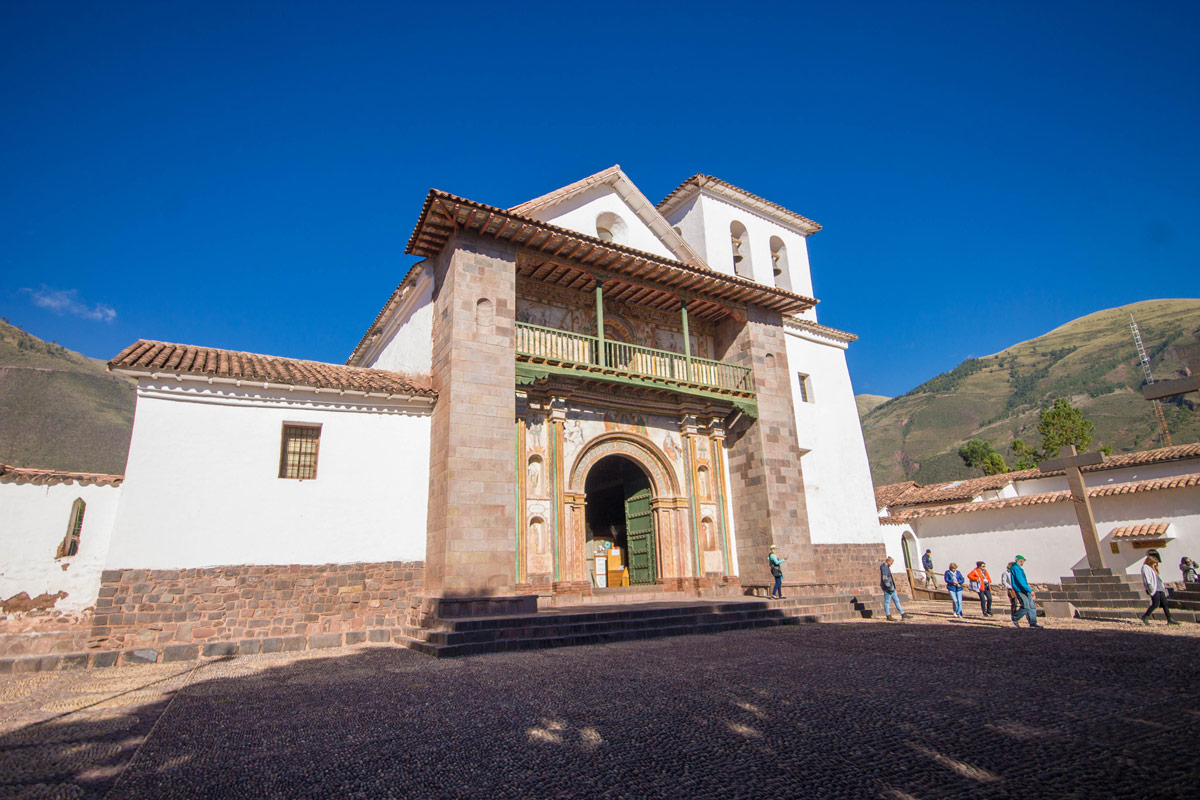 Pro-Tip: Entrance to the church is 10 soles. If you do not want to enter the church, you don’t have to pay the fee and can wander around the square in front of the Iglesia de San Pedro.

It was disappointing to find out that we were not allowed to take photos inside the church. In lieu of this, we were provided with a CD full of photos and videos. The baroque interior was filled with carvings and paintings. Many were laden in gold-leaf. A guided tour is part of the entrance fee. We learned that the church has a guard round the clock to protect all the gold and silver treasures that are said to be held in the church. 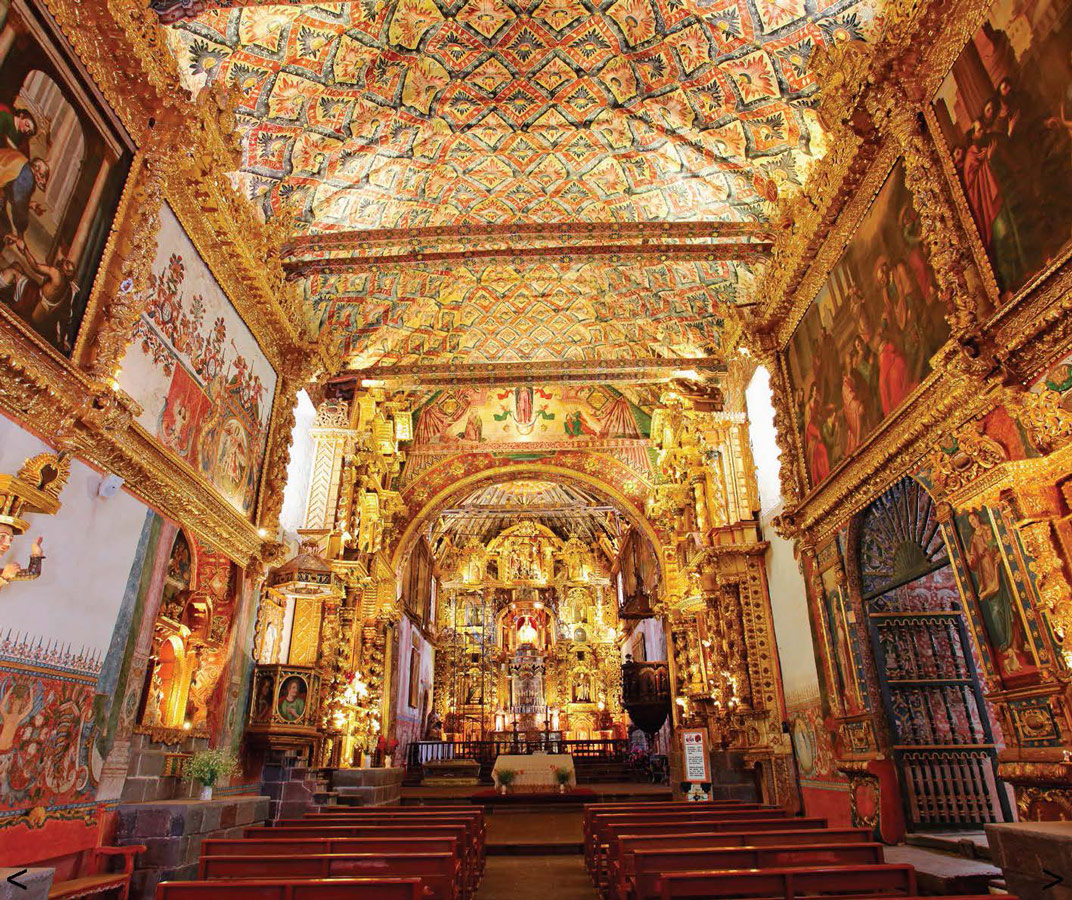 Next, we stopped in the Colonial town of Checacupe. The town has a church which we, unfortunately, didn’t have time to visit as we were in line to cross the replica Inca bridge in town. We were glad to have seen this bridge as we didn’t have time to visit the Q’eswachaka Rope Bridge in Quehue, Peru. Although the Urubamba river below didn’t look too fast, the bridge certainly looked intimidating at first glance. But C was insistent that he cross the shaky bridge by himself. Have a look at the video at the bottom of the page to see how well he did! 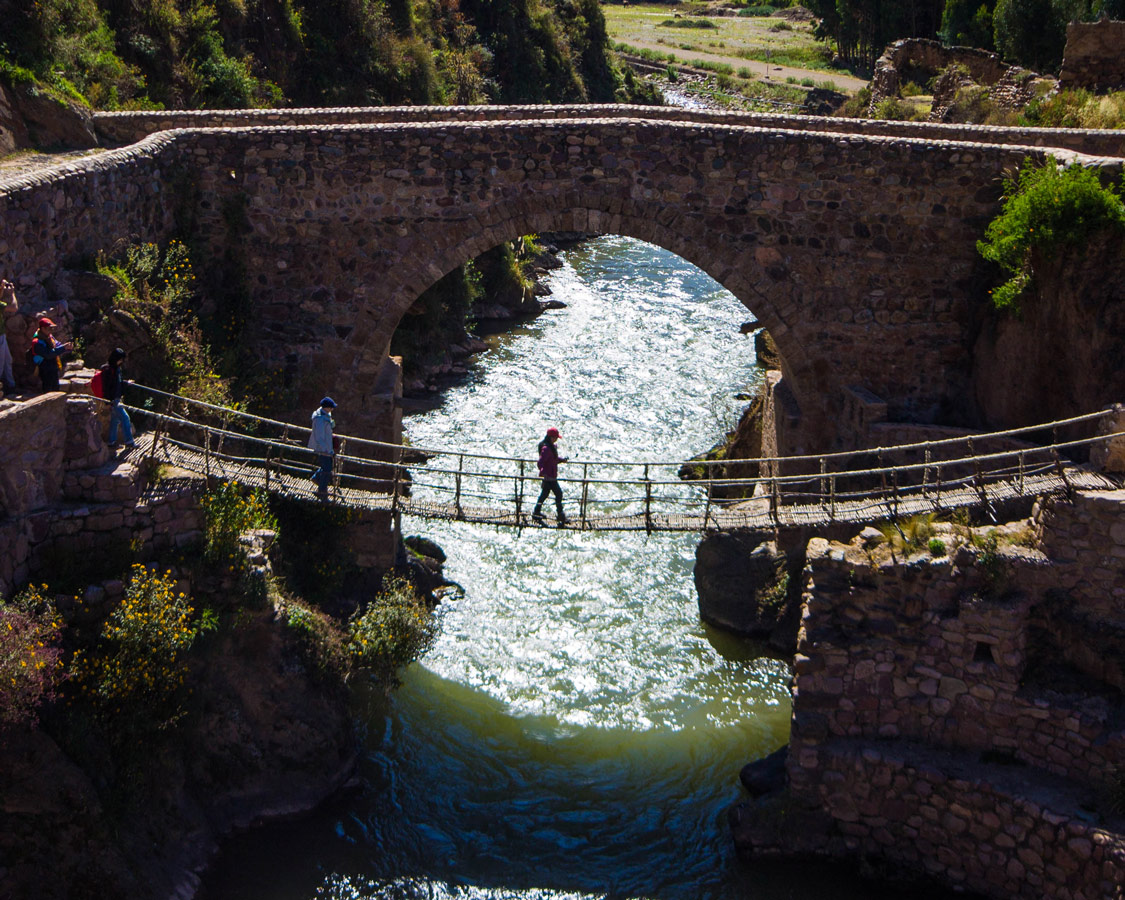 Our final stop before lunch was the small village of Raqchi (San Pedro de Cacha) to view the Inca ruin of Raqchi. The entrance fee was 10 soles. Upon entry, we immediately caught sight of the Temple of Wiracocha (also known as the Temple of Raqchi). Wiracocha was a deity and according to the Incas, he was the creator god. The temple was built in his honor. It stands an enormous 92 m long (302ft) and 25.5 m wide (84ft). The Temple once had 22 columns (11 on each side) of stone blocks which held up the largest known Inca roof. 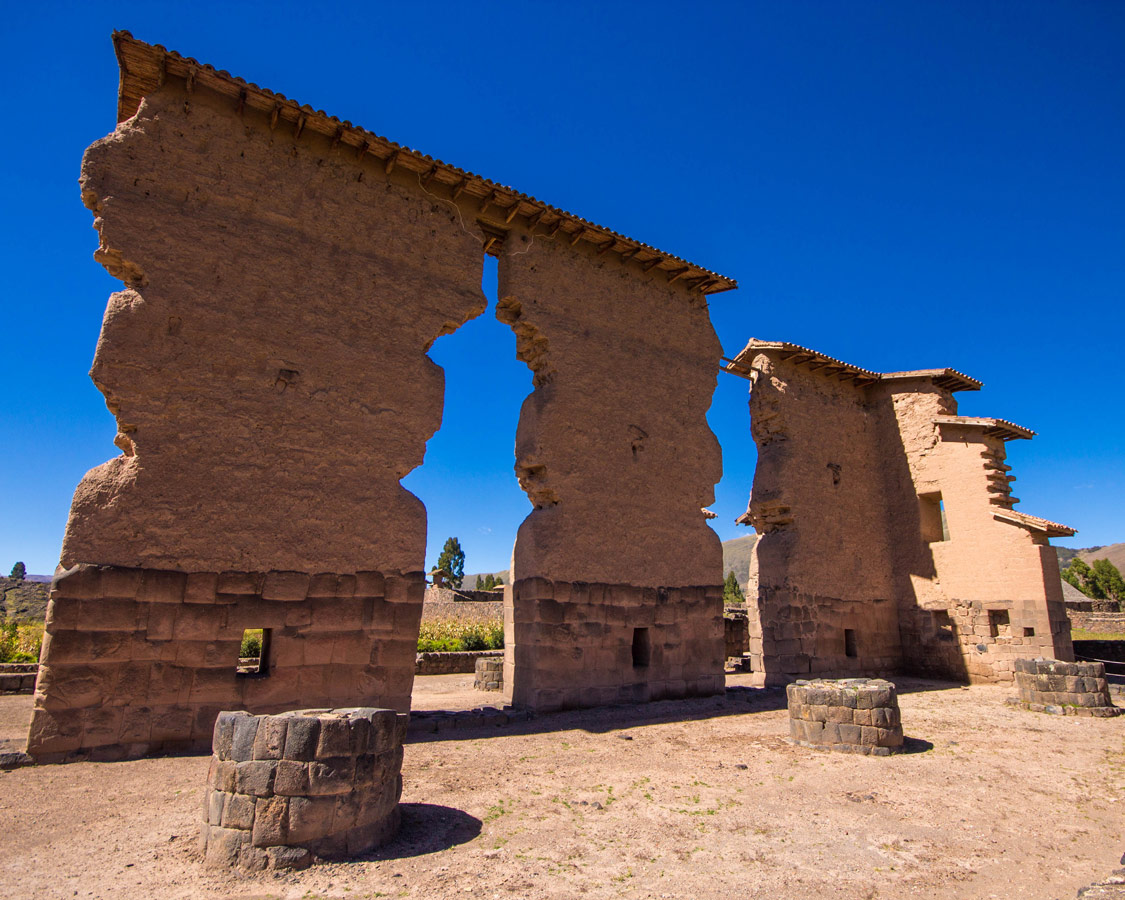 After the Temple, we visited the rest of the complex, thought to be one of the largest Inca sites to be discovered. There were living quarters, storehouses, and even ceremonial baths. The kids really enjoyed going around pretending to be archaeologists, taking pictures and discovering the site for the first time. 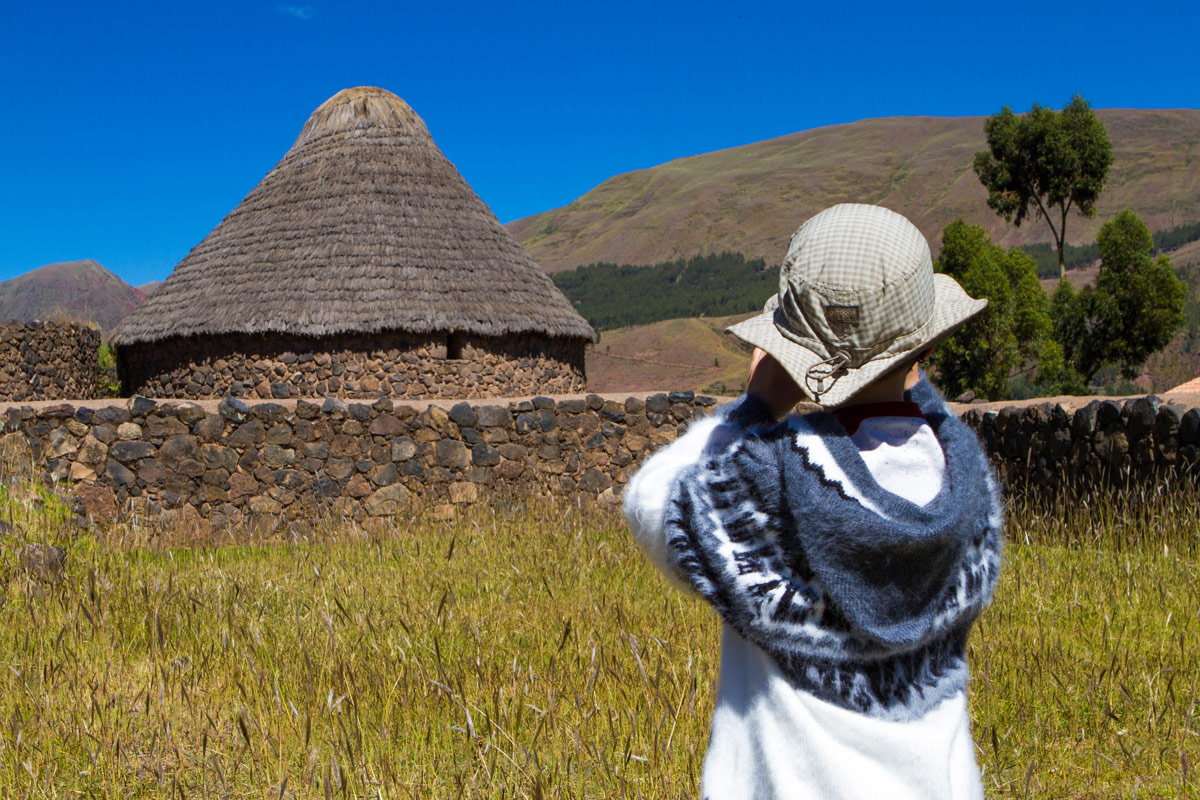 After going inside the archaeological complex for our guided tour, we walked around the square were many locals were selling pottery. We learned that the townspeople are expert potters and many of the decorative pieces sold in Pisac and Chinchero come from Raqchi. We also stopped to admire the town church before hopping onto the bus. 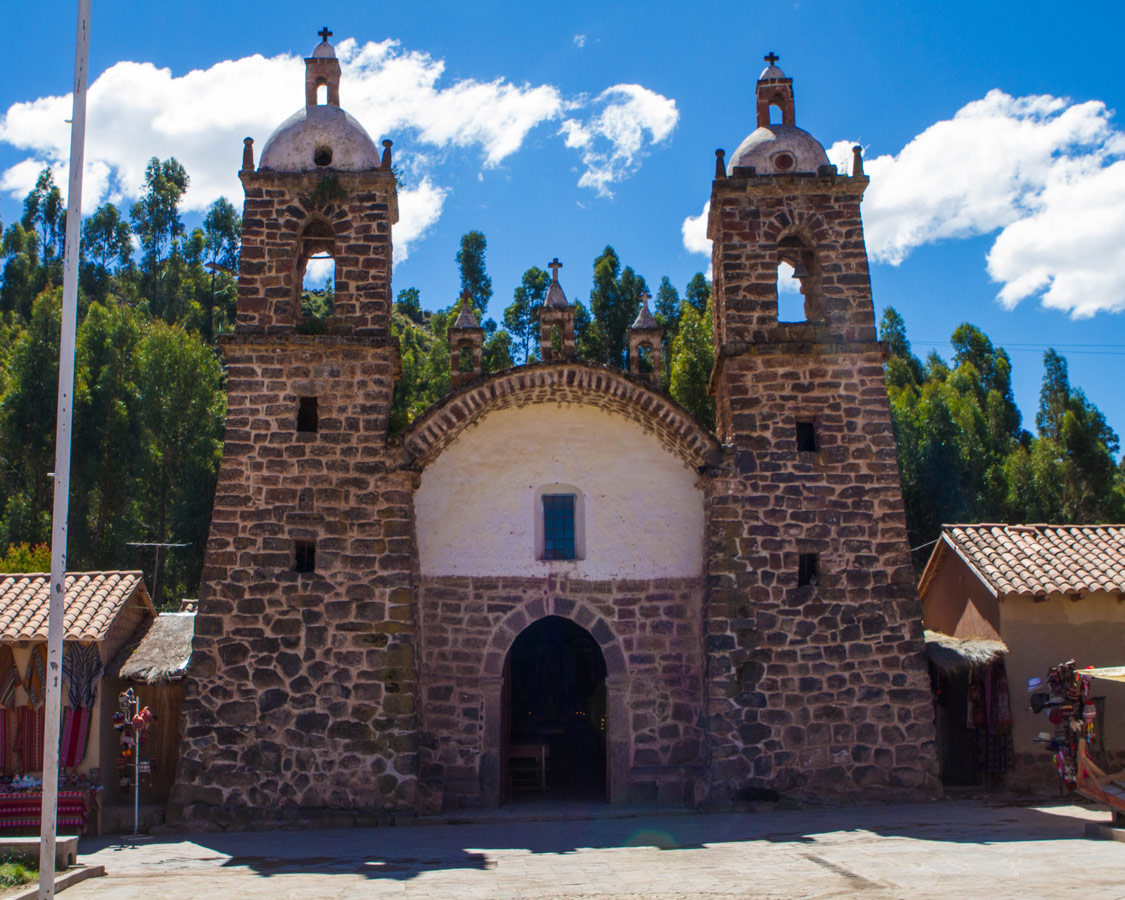 Our next stop was for lunch. We stopped in the town of Sicuani, the capital of the province of Canshis, where a buffet restaurant that caters to tourists is set up. There was a small but interesting museum at the upper level of the building that held the restaurant. They had displays explaining Peruvian culture. After a brief visit, it was time for lunch. 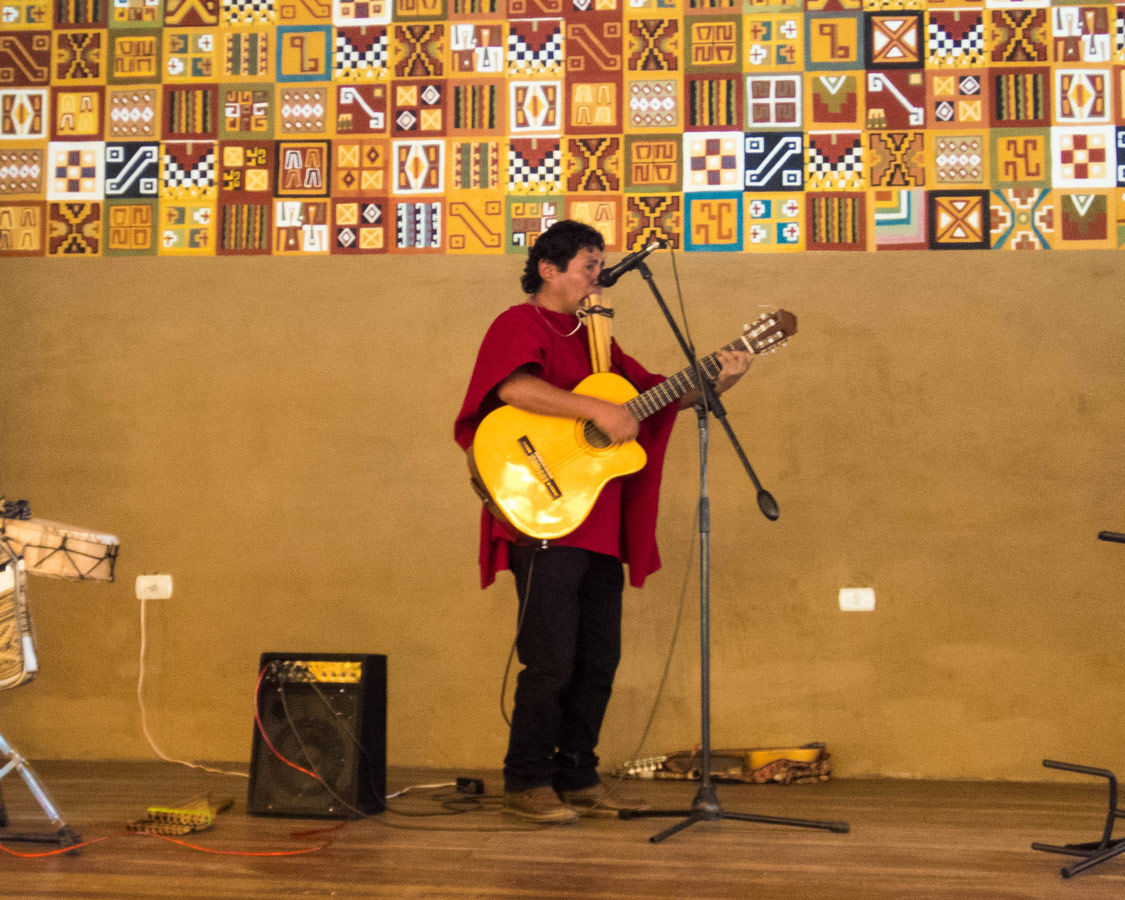 The price of the buffet was included in the cost of the bus tour along with hot drinks (tea and coffee). Juices and other cold beverages were charged extra. There was a nice selection of food. The boys had no issues at all finding something to eat from the soup, to the main dishes, and dessert. In fact, I think they gave all the dessert choices two thumbs up.

Our first stop after lunch brought us to the highest point in our journey, La Raya. The area also marks the division between the departments of Cusco and Puno. 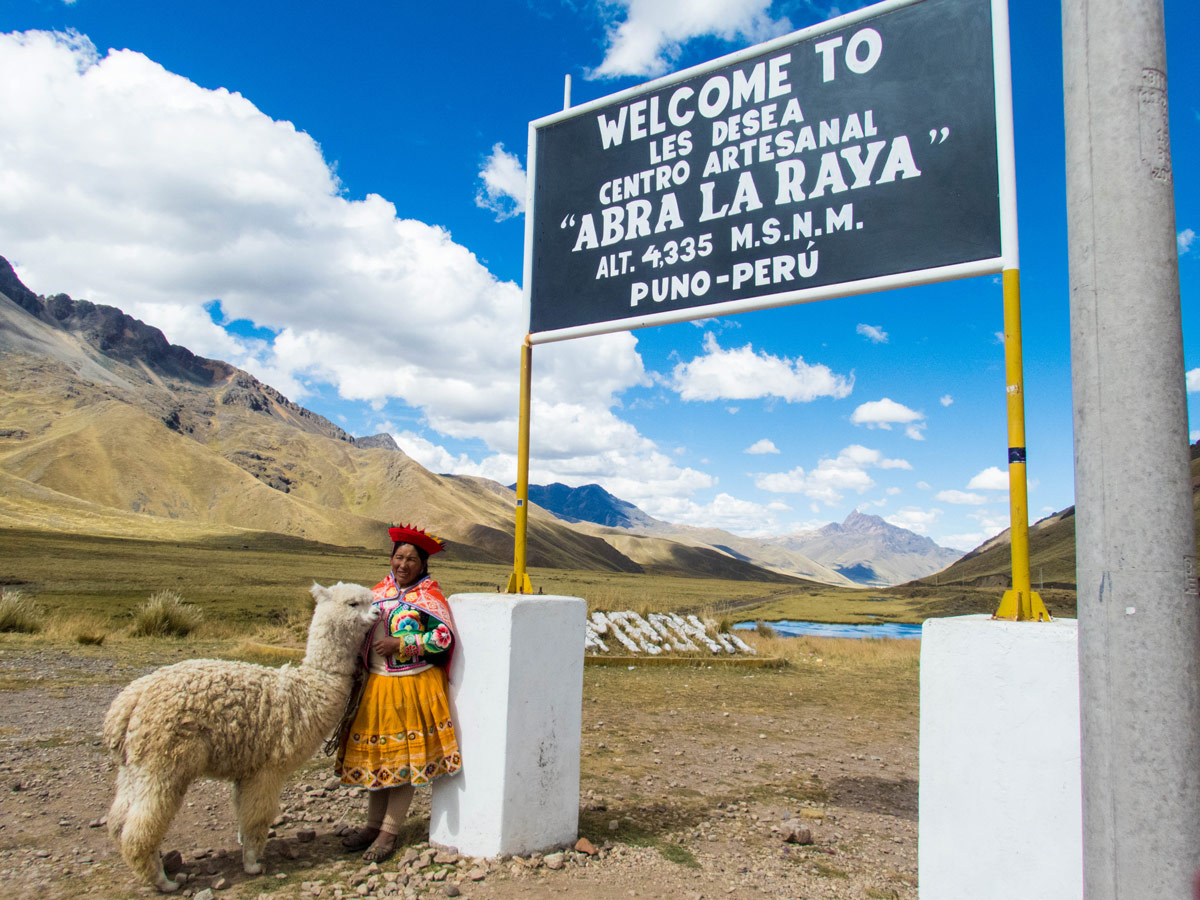 A small market was set up at the stop selling typical Peruvian wares such as sweaters, hats, scarves, and decorative rugs. We only had a few minutes to enjoy the majestic view of the snowy peaks of Apu Chimboya and take pictures. It certainly took our breath! 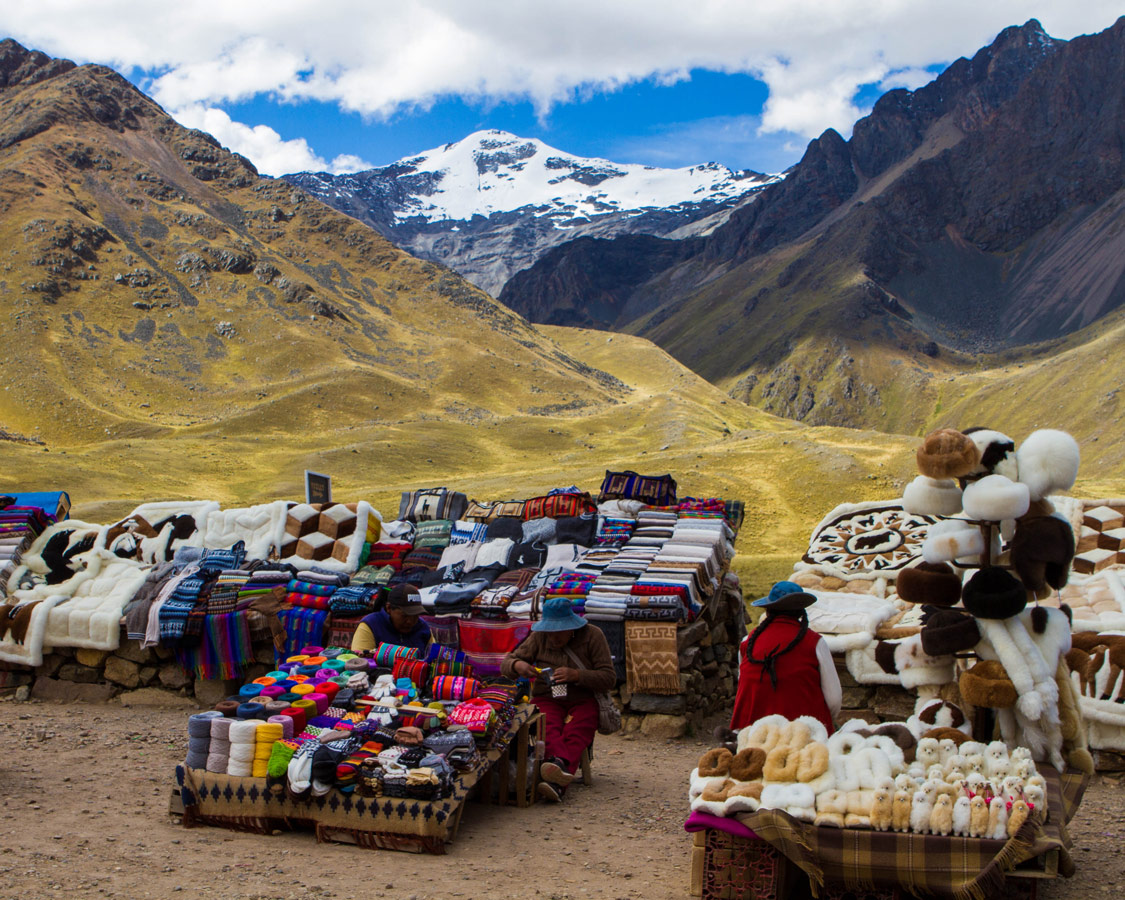 Pro-Tip: The Inka Express is also equipped with an oxygen tank on board in case anybody had not yet fully acclimatized. Good thing they did as somebody on our bus tour needed it.

The last stop before Puno would be the village of Pukara (Pucara). The town is famous for its talented ceramists who craft the “Toritos de Pucara” or the little bulls of Pucara which can often be found adorning rooftops in houses in Peru. We also saw them adorning the fence surrounding the church of Pukara. Unfortunately, the church was closed at the time of our visit. 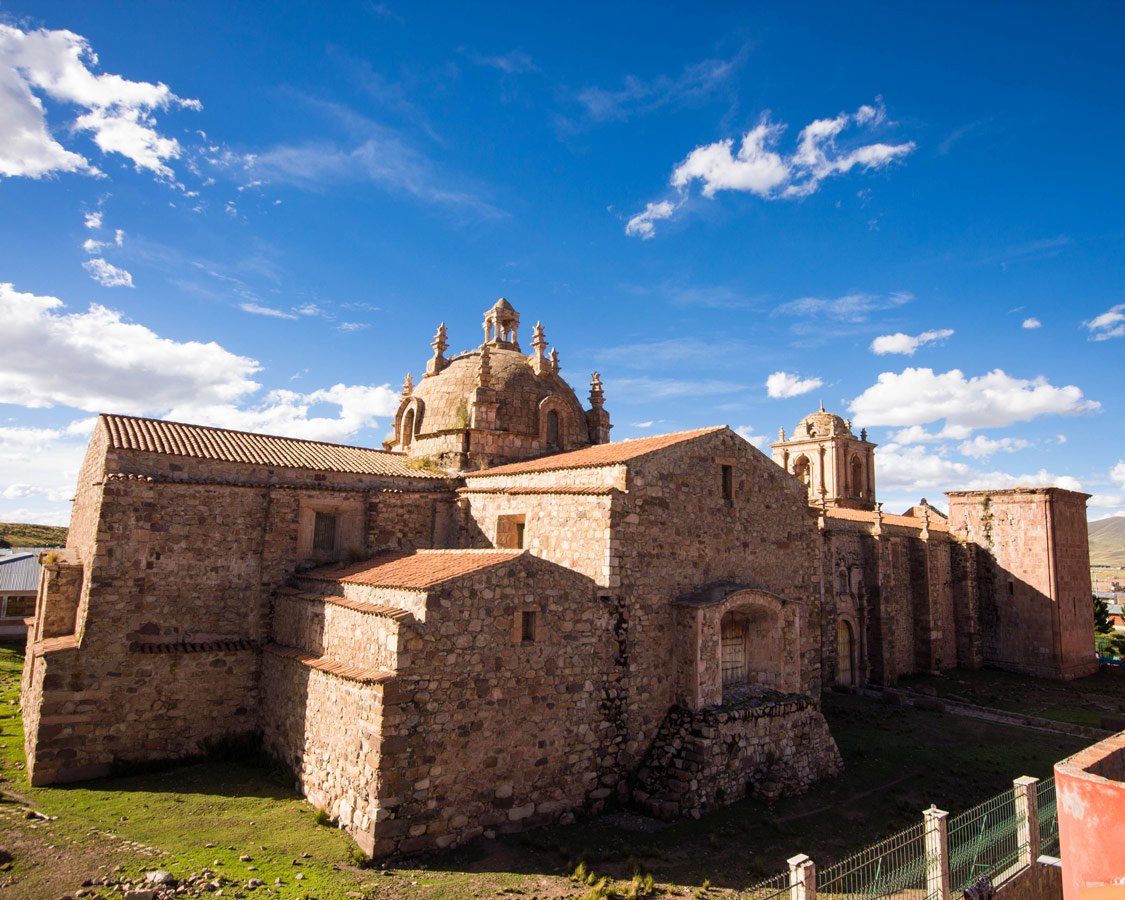 Across from the church was the Pucara Stone Museum (Museo Litico de Pucara). There were some amazingly intact pieces of stonework and pottery that were from pre-Inca times. The source of the pieces was the archaeological complex Pucara found further up the road from the museum. Unfortunately, the archaeological complex was not part of the bus tour. 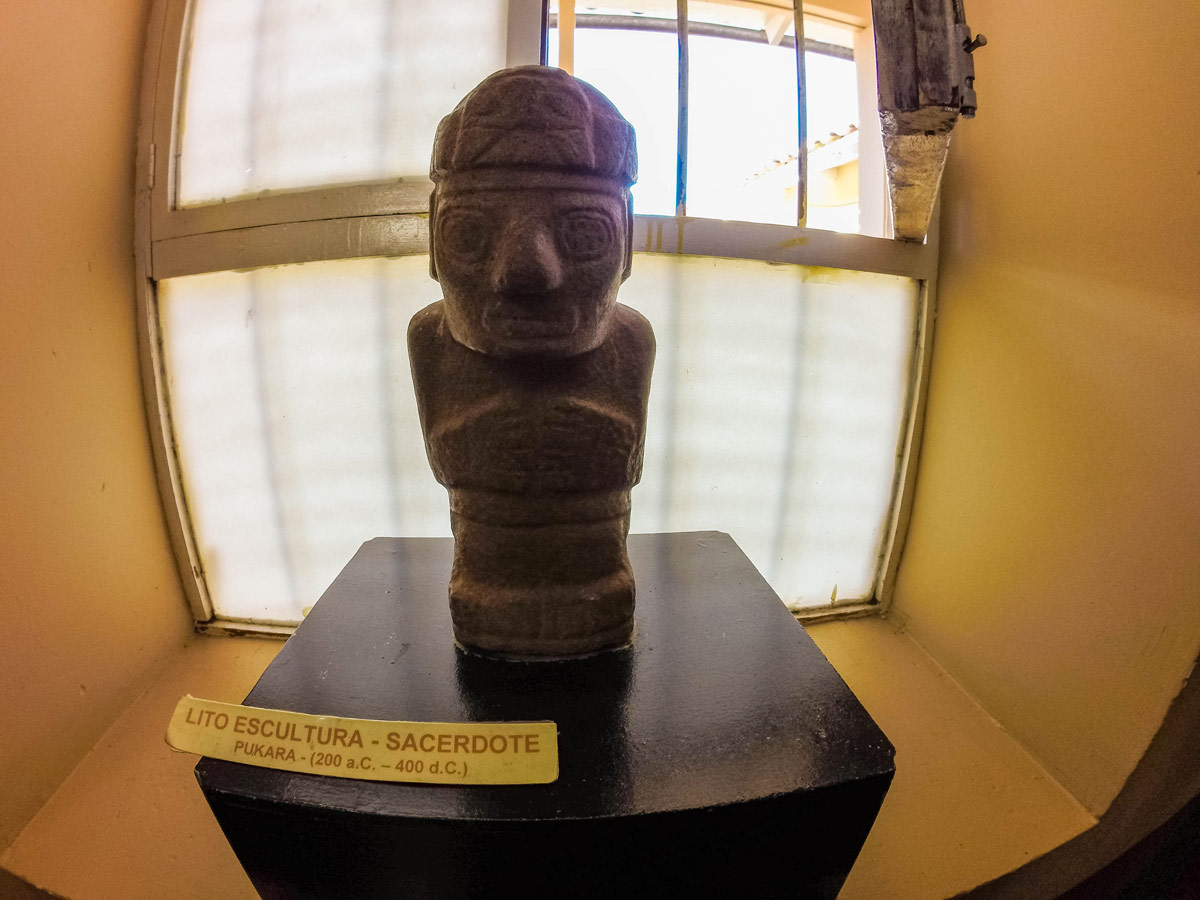 The museum rooms were tiny and the boys felt a little claustrophobic during the guided tour. They enjoyed the self-tour of the grounds, where several larger stone pieces were also displayed, much more.

How to Survive the Tourist bus with Kids

The last leg of our journey was just over an hour long. Before we knew it, it was 5 pm and we were pulling into the bus station in Puno. Even with all the sites, we visited, there was much more we wish we had time to see and explore.

The bus ride was comfortable. Also, the number of stops ensured the kids were not bored on the journey. We had some snacks for the journey, including some chocolates we made in the ChocoMuseo in Cusco. Having drinks freely available on board ensures that the kids stayed well hydrated. 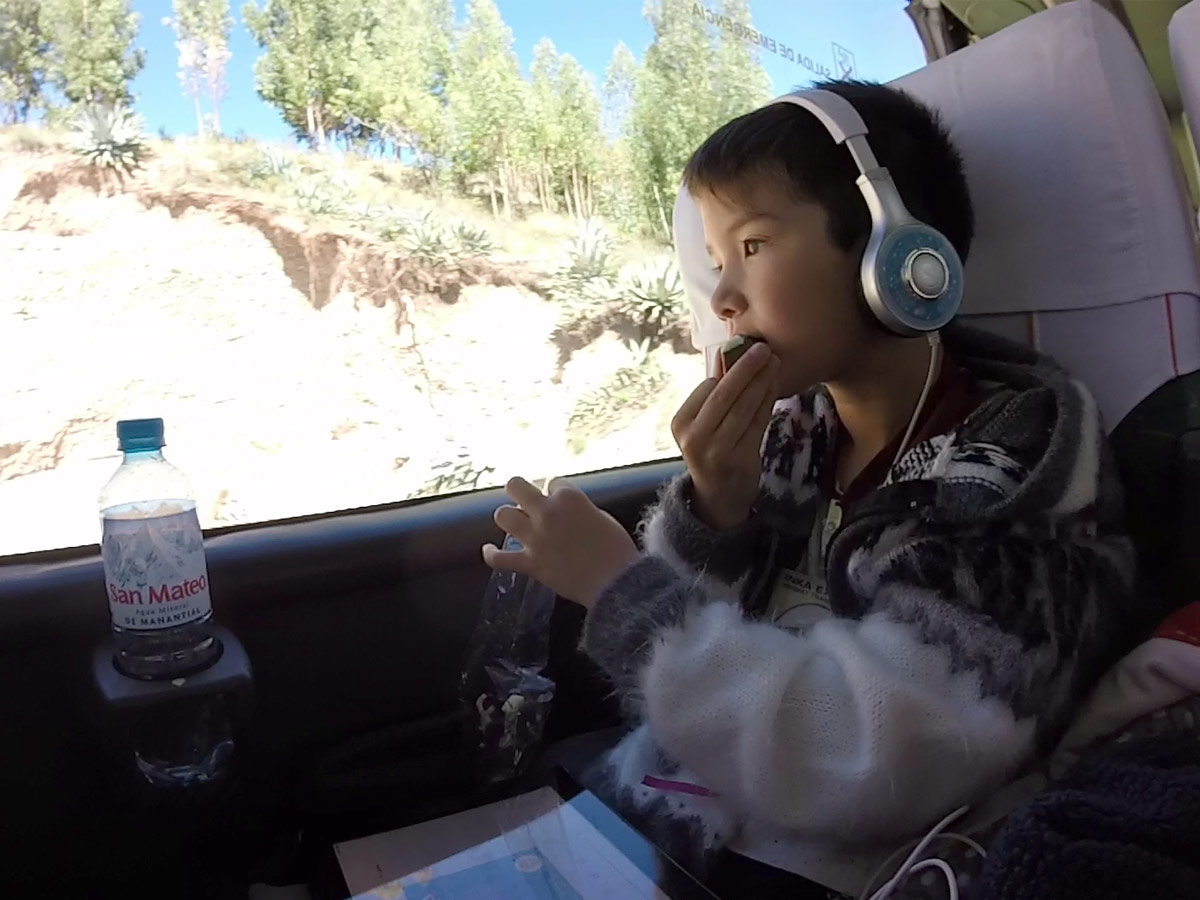 The one thing that was disappointing though was that the bus did not have in-seat power outlets. C enjoys listening to his audio books on long drives and as the ride was almost 10 hrs long, it would have been nice to have some place to keep iPads and cell phones charged. Have you been on a long bus ride with kids? 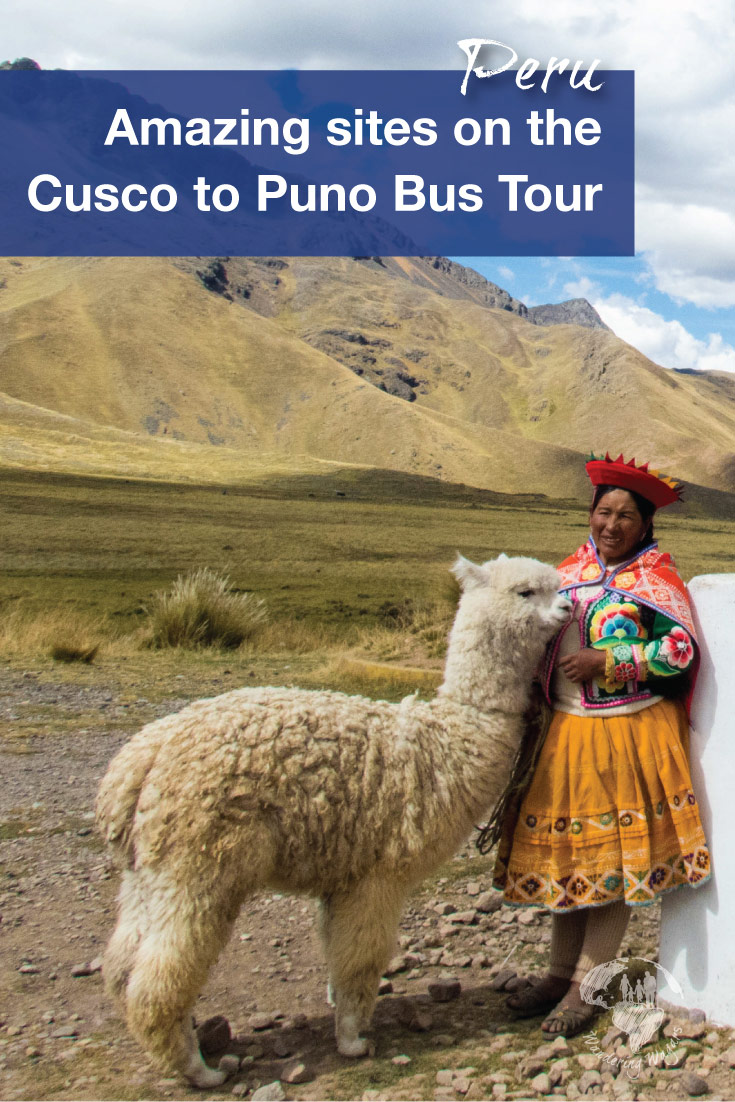