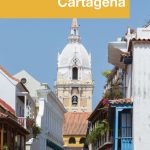 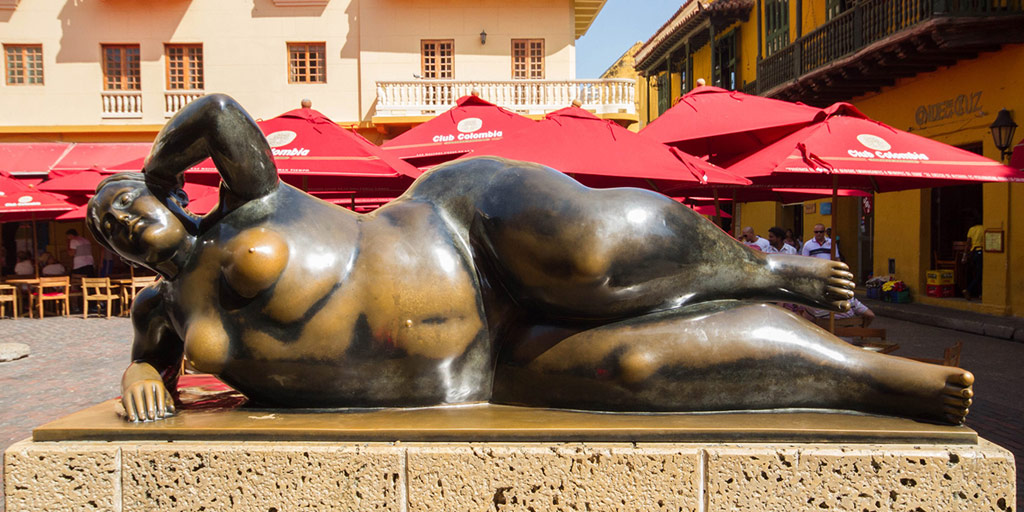 Cartagena de Indias in Colombia is rich in history and adventure. Pirates battling Spanish Conquistadors for gold comes straight to mind when looking over this sprawling city that was once five islands connected by bridges. The blue Caribbean water stretches out from the coast with the incredible walled city at its point while the more modern working-class area of Cartagena leads inland.  The city can be divided into three general areas: The Historic Centre (the walled old city, including Getsemani), the New City (including Bocagrande, Castillogrande and Lagito) and La Manga (a mostly residential area).

Many people questioned us as to why we would travel to Colombia and even more questioned why we would think about bringing our children to such a dangerous place, but Colombia has changed a lot in the last decade. The cartel wars are over and the government is working with the people to bring back tourist dollars to this incredibly beautiful country.

In order to learn more about the culture and history of Cartagena, we hired a local tour guide, Martin Rosales, to show us around his city for a full day. Martin picked us up first thing in the morning at the resort in his air-conditioned sedan and off to our adventure we went.

We checked out Cartagena from the top down.  So, to get started we headed to the highest point in the city, Cerro de la Popa. The drive was steep and full of zigzags. Upon reaching the top of the 150 m hill, we caught our first close-up view of the Convento de Nuestra Señora de la Candelaria or Convento de la Popa as it is more commonly called. Founded in 1607 by Augustine monks, the building is simple and the glass entrance is very modern. Although it no longer serves as a convent, inside we found an effigy of the Virgen de la Candelaria, which is often visited by pilgrims. 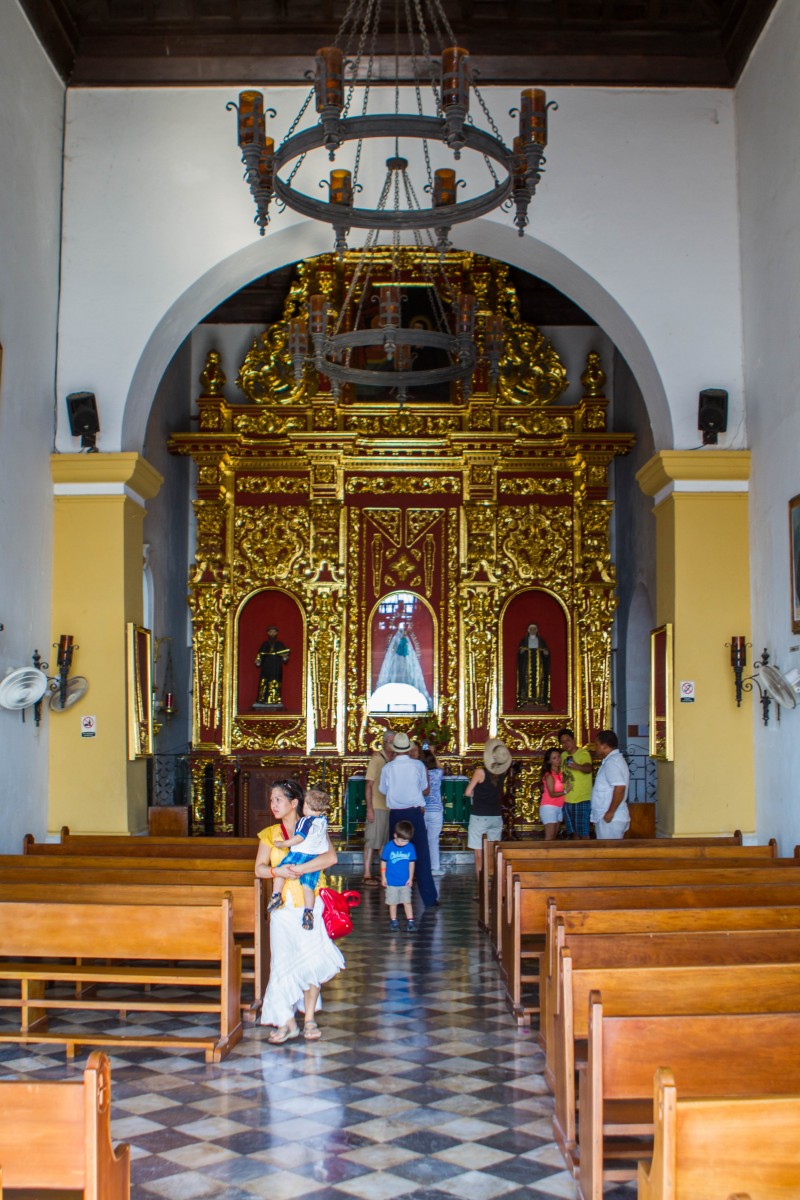 The complex has a stunningly beautiful inner courtyard filled with a lot of flowering plants. The smell of the flowers wafted over us as D ran around picking up the fallen petals while C explored all the old pots and a spot he called the “wishing well” in the center of the courtyard. We were lucky enough to visit on a clear day and the views outside were amazing. On one side you can view modern-day Cartagena and on another side, we were able to catch a glimpse of the old walled city. 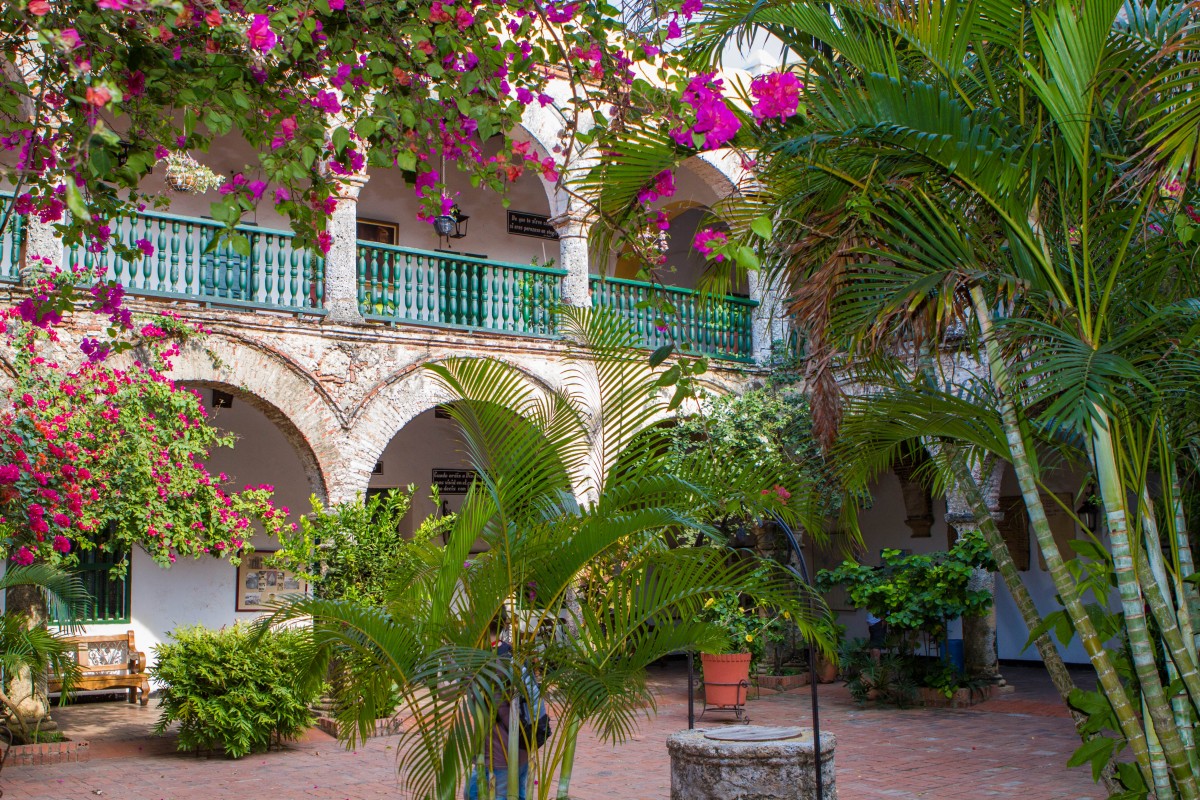 Pro-Tip: Note that walking up the hill is not recommended, the corners are all blind and there is a lot of traffic. It’s easy to catch a taxi at the bottom of the hill.

From the convent, we drove to Castillo de San Felipe de Barajas. Declared a UNESCO world heritage site in 1984, it is the largest fortress in Cartagena and the third largest in all of Colombia. Built mostly by slaves between 1537 and 1657, this fortress underwent several additions well into the 1700s. It’s located on San Lazaro hill and was originally called Castillo de San Lazaro.

There is no parking at the castle. So, if you drive you will need to park at the foot of the hill. Then, you will walk up the first of many ramparts. C preferred to walk in the canal system. Thankfully, D was content looking at the sites from the comfort of his stroller. When we got to the top, there was a nice breeze from the Caribbean. The children raced around from one canon to the next. C enjoyed pretending to light the fuses to defend us against pirates. We felt safe in C’s hands after learning that the fortress had never been captured. Although, there were many attempts to storm it from pirates, corsairs, and other invading armies.

Next, Martin expertly led us through the maze of tunnels for which the fortress is known. The tunnels were constructed so that any reverberations could be heard along its length. This meant that even a whisper could easily be heard even if you were a few feet away! If it were up to the children, we would have spent our entire vacation running around the tunnels and playing hide and seek. We highly recommend hiring a guide when visiting the fortress, it’s easy to get lost in the maze of tunnels that run underneath the castle. If you are not arriving as part of an organized tour, guides can easily be hired near the ticket office located at the bottom of the hill. 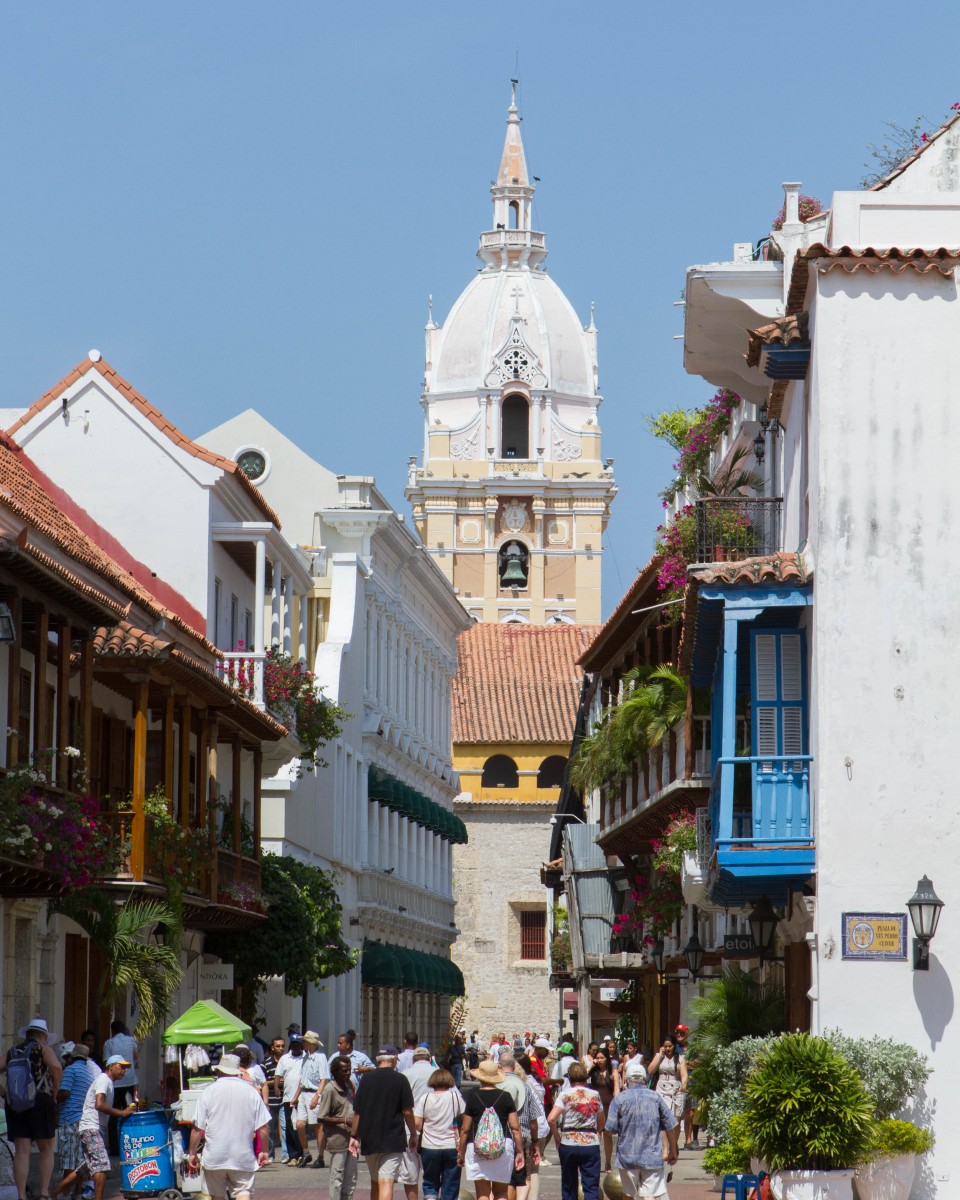 We headed next to the walled city of Cartagena. We drove around the outside of the walls first giving us a good feel for the layout of the city and a chance for our guide Martin to tell us stories about the history of the city. The few hours devoted to the old city as part of the day tour was not nearly enough time to properly explore the city so we decided to go back on another day and explored the city ourselves later.

Our first stop was the Cathedral Santa Catalina de la Alejandria. It was easy to find due to its highly recognizable bell tower that can be seen throughout most of the walled city. The inside was under major renovations but they had cut holes in the scaffolding allowing us a glimpse of the very detailed front altar. We headed north to Plaza de Santo Domingo to take a picture with Fernando Botero’s famous voluptuous statue, The Reclining Nude. We had to wait our turn which is a testament to the growing popularity of Cartagena as a tourist destination. Also located on the plaza is the Iglesia Santo Domingo. Unfortunately, the church was closed to visitors that day. 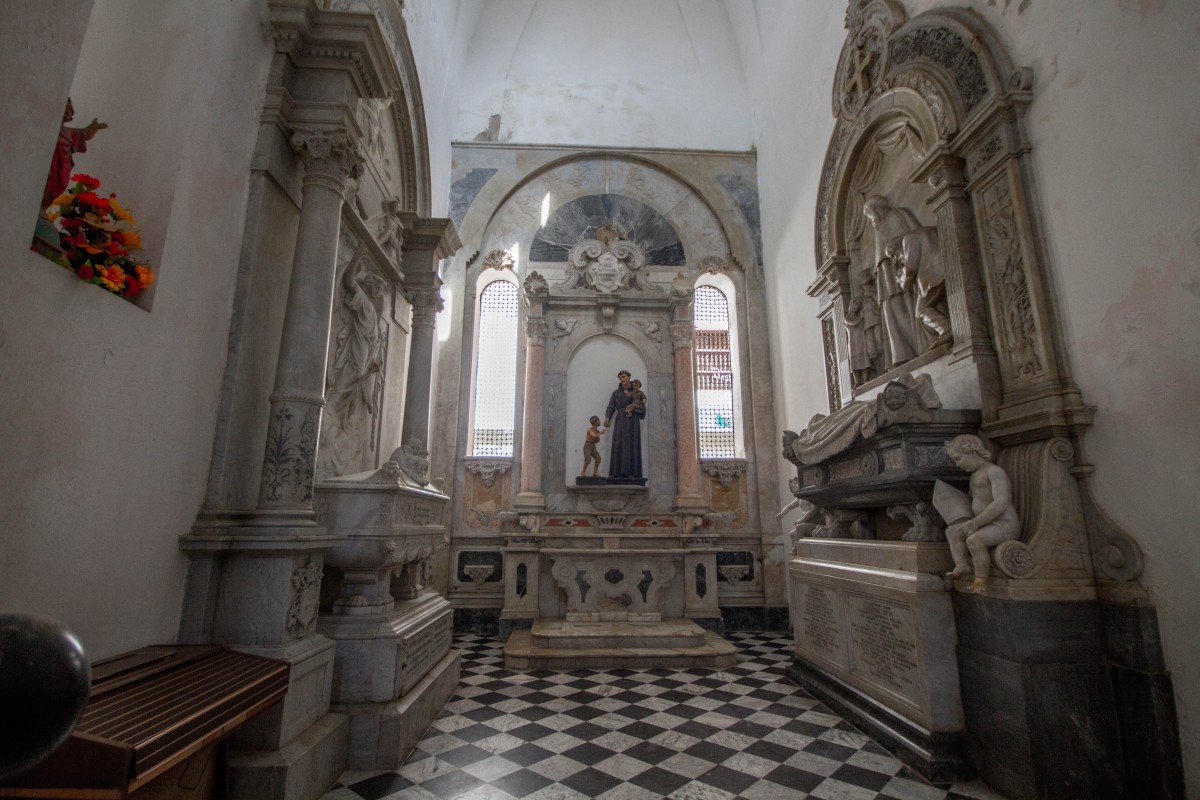 Onwards to Plaza San Pedro Claver where there are several abstract sculptures that belong to the Museo de Arte Moderno. C loved interacting with the sculptures. He even tried to interrupt a game of chess thinking that the players were just taking too long. In the meantime, D spent time hopelessly chasing away the birds. 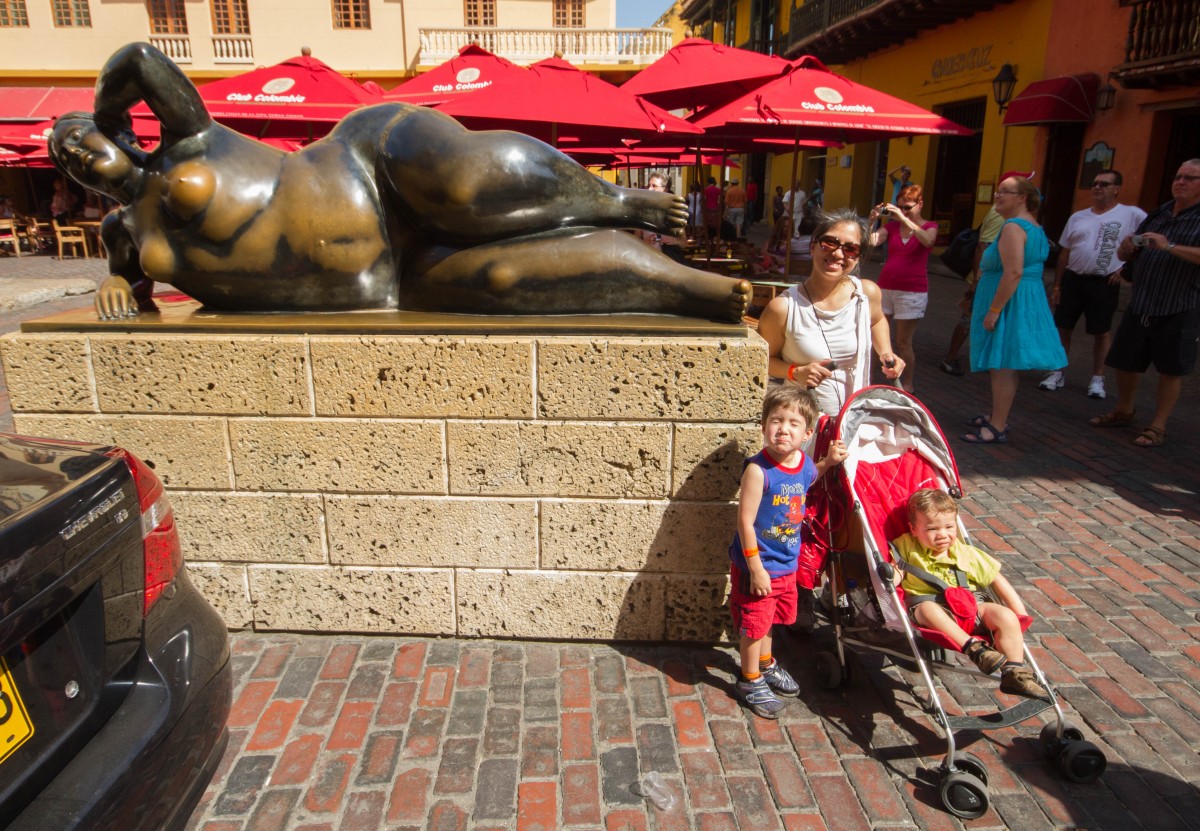 Located in the plaza is the baroque Iglesia de San Pedro Claver. Service was going on during our visit so we opted to explore the convent and museum first. It is possible to hire an English speaking guide at the ticket office. But, we opted to venture on our own so as to be able to go at a slower pace. 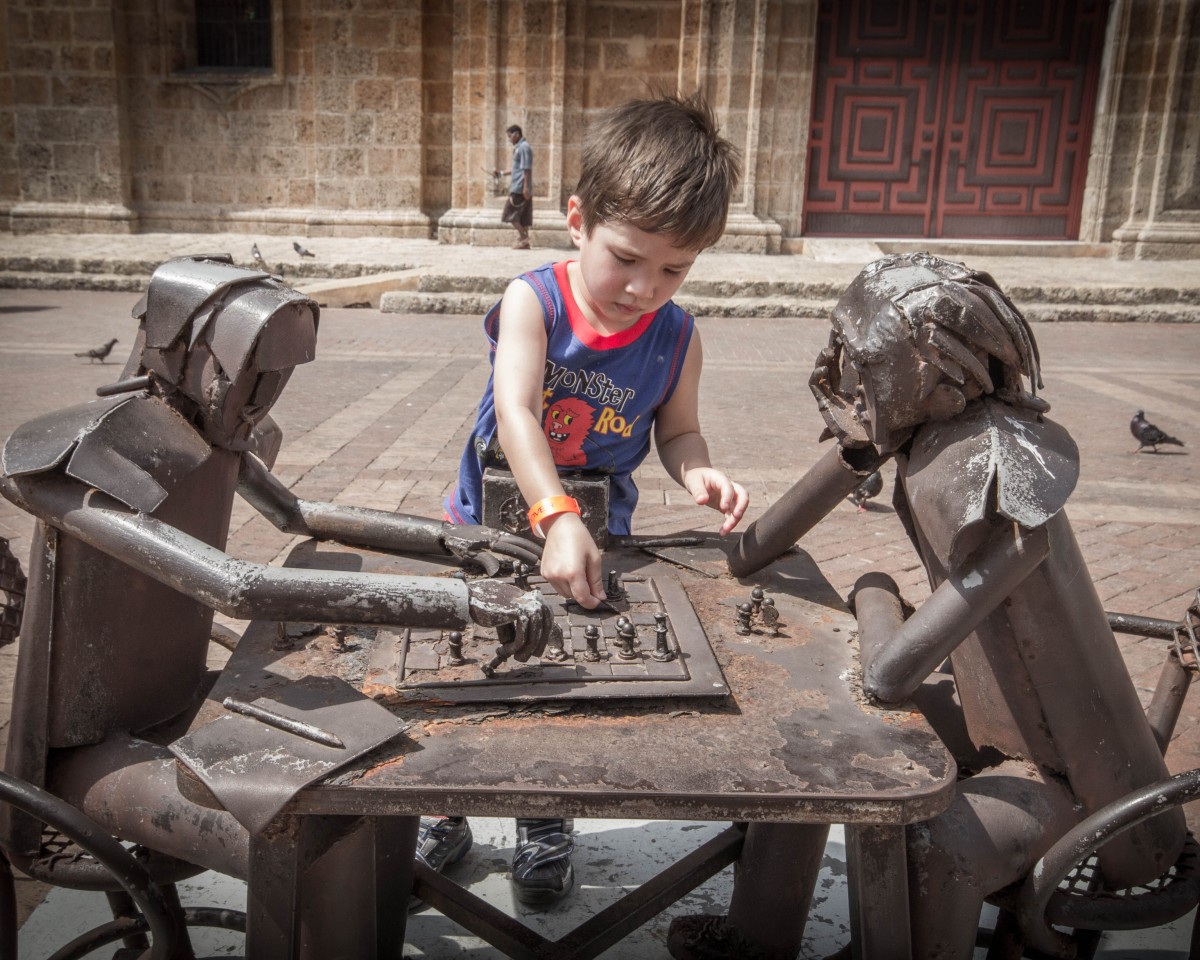 After all that exploring, it was time for lunch. Just outside the Iglesia de San Pedro de Claver, ladies dressed in traditional garb selling trays of fruit. Mangoes are a big favorite in our family. So, we bought some to snack on. Next, we headed to C’s requested destination for lunch: El Portal de los Dulces (Door of Sweets). 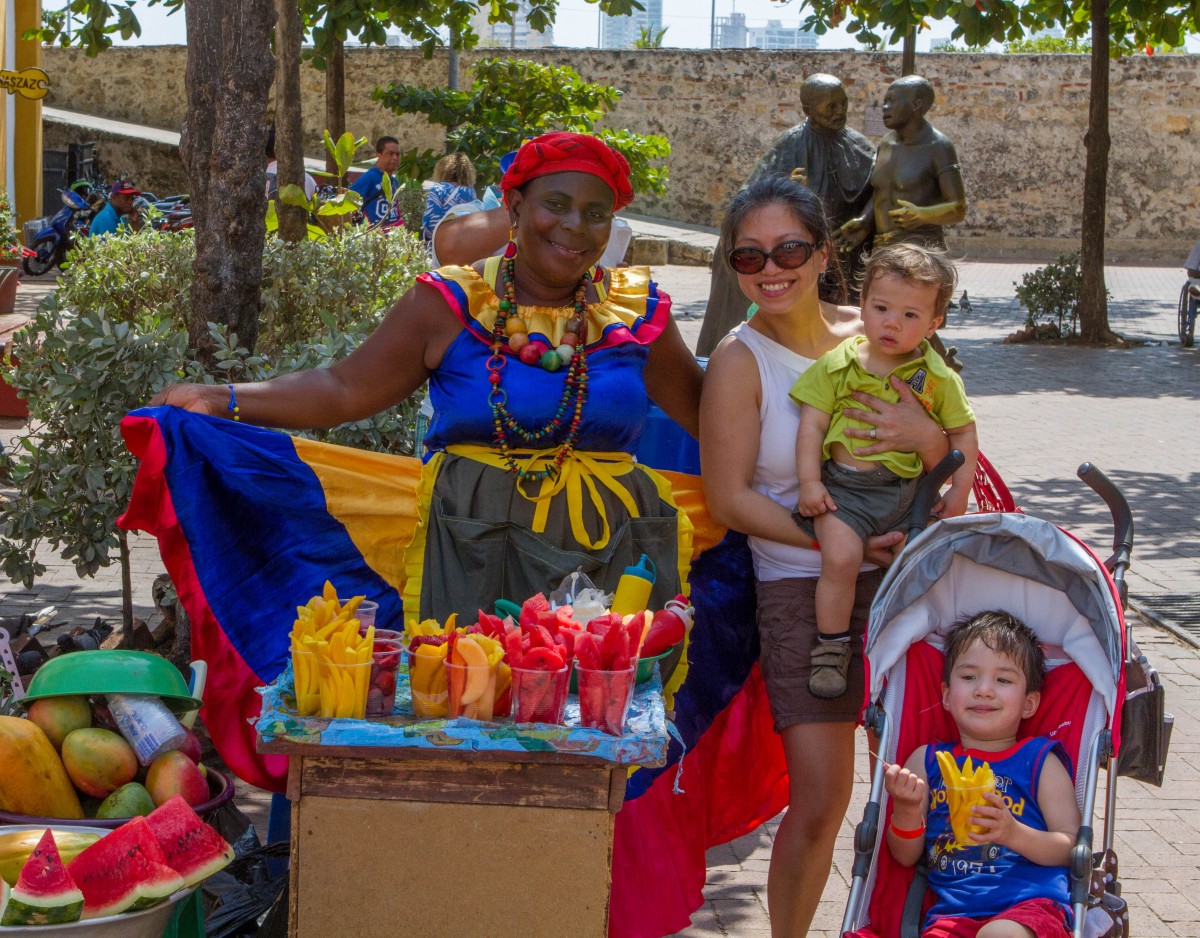 Elo Portal de los Dulces is one of the best places to experience Colombian food. Specifically, this part of Cartagena has markets full of the most delicious treats in Colombia. The ladies working the sweet stands were so enamored with the kids. This meant that every time we turned around they were trying to stick goodies into their pockets! We purchased some very yummy empanadas and candies for dessert of course! We plunked ourselves down at the adjacent Plaza de los Coches and people watched as we ate. 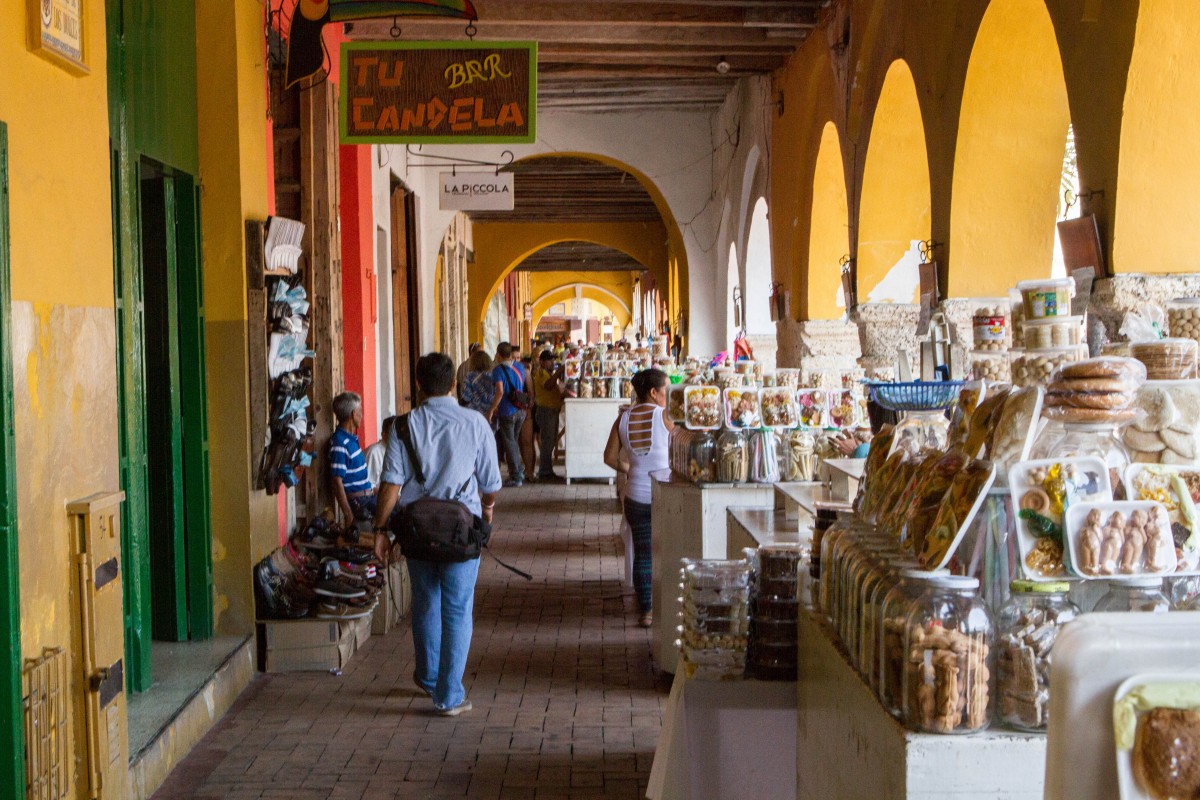 With our bellies full we explored the city a little bit more. In between sites, the children had a blast walking along the tops of the ancient city walls. 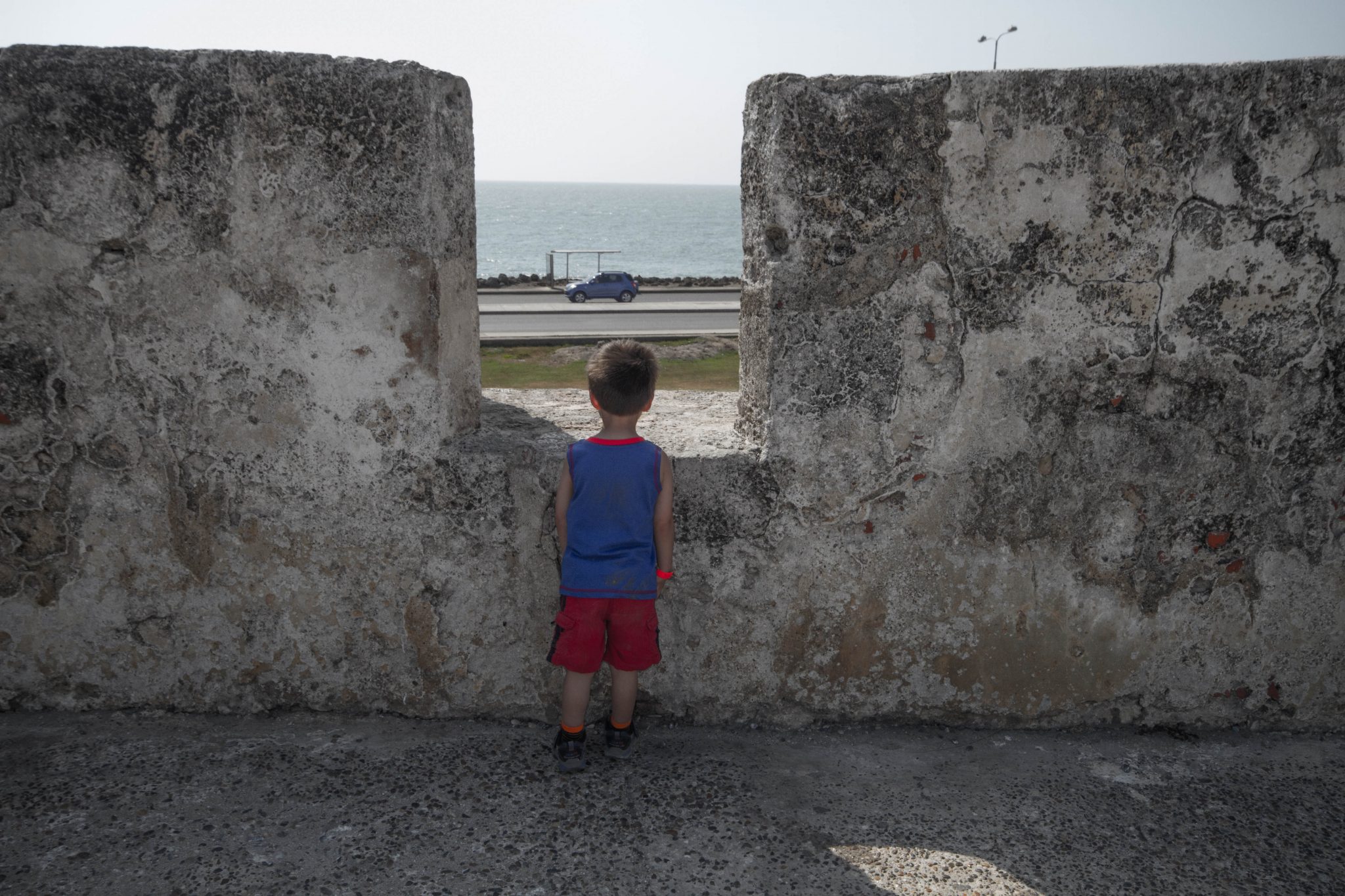 Our day tour ended with a stop at the Joyeria Caribe Emerald Museum and Factory. The shop/museum was a lot more fun than we had anticipated. Upon visiting the shop we received a short tour that detailed the history of the store. We learned a lot about emerald mining in Colombia and emeralds in general. The presentation was quirky and kept the kids interested. They had hands-on displays full of hilarious mannequins dressed in mining garb that D just could not stop staring at. We did not feel pressured to purchase anything. Also, they didn’t seem to mind having the children running around while I window shopped! 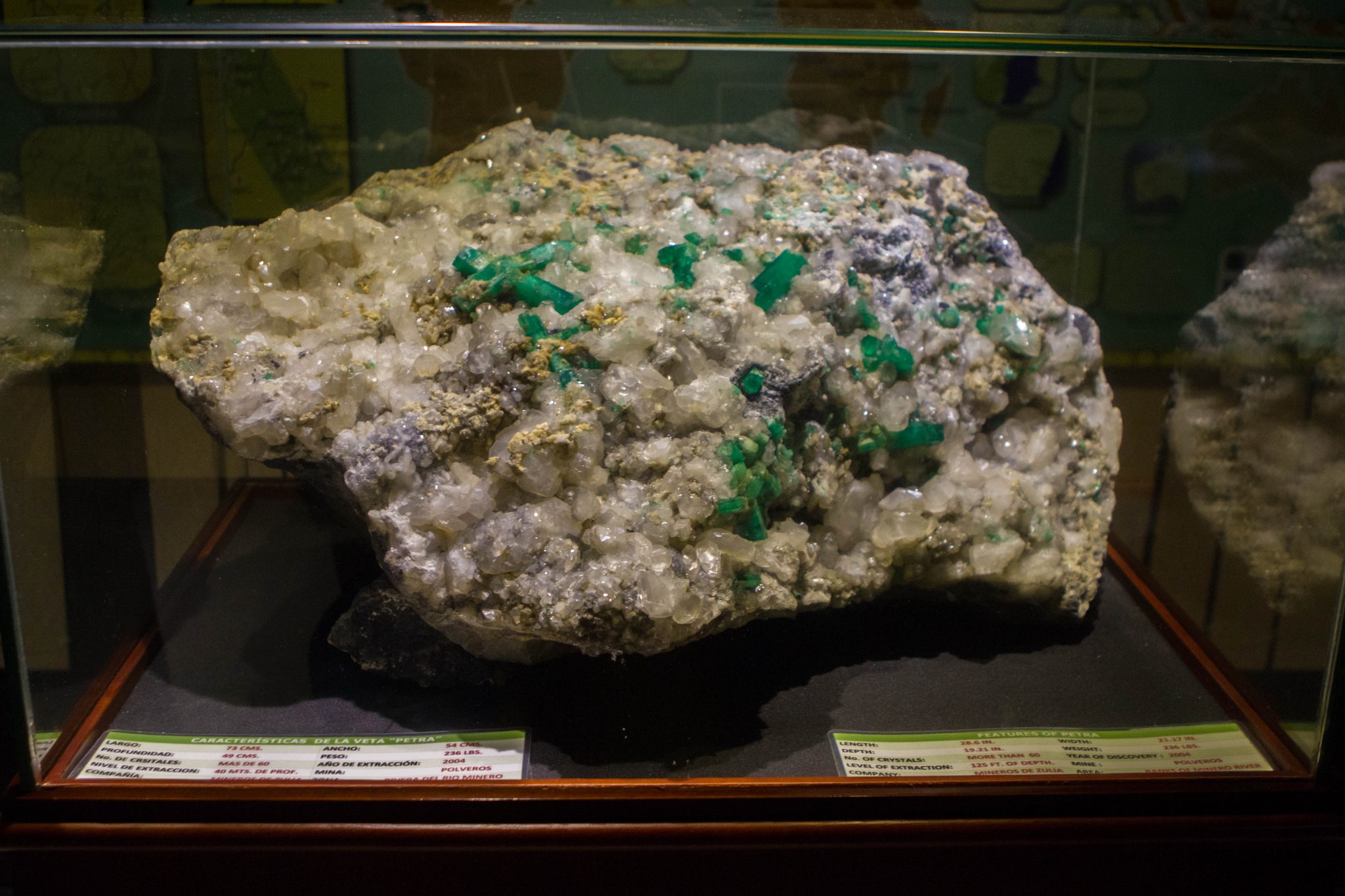 Before our trip home, we were looking forward to exploring some of the nearby Rosario Islands. We would also be making a trip to Bogota to look for lost treasure.

Our time in Cartagena was wonderful! The hot weather helped us kick off the seasonal blues from the winter back home and the cheerful and fun personalities of the locals warmed our hearts. If you are looking for a great location for a winter getaway, get to Cartagena, Colombia while it’s still off the beaten track! 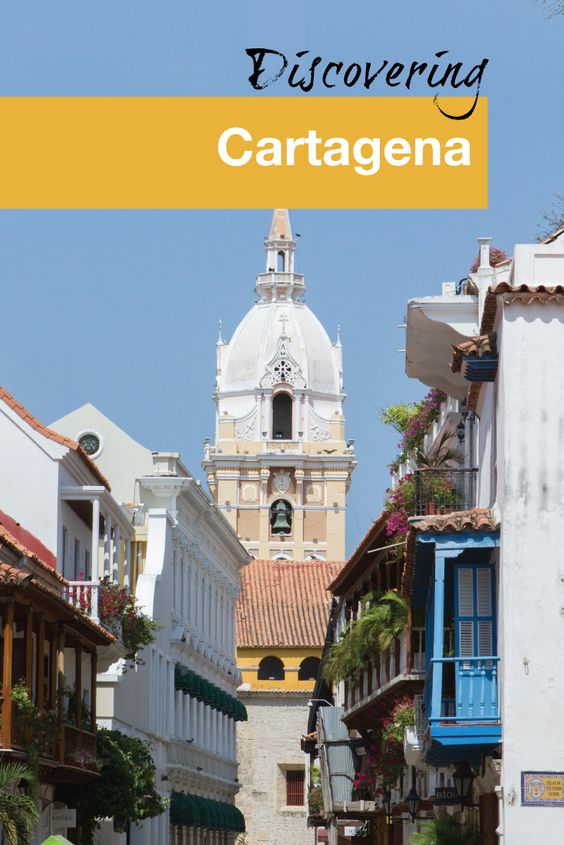