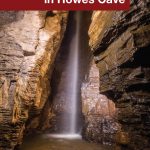 Discover why a visit to Secret Caverns New York should be on your radar. Explore this incredible show cave and its 100 ft underground waterfall!

Our Journey To Secret Cavern Began In New York City

We love visiting New York City. Growing up, my family made the 8-hour drive from the outskirts of Toronto to New York City many times throughout the year to visit family. With every visit, we would explore a different park, museum, or neighborhood.

New York City has so much to offer, I don’t think it would be possible to see everything even in a lifetime of visits. I have passed this love for New York to my children.  Their favorite is definitely spending Christmas in New York City. They even like to chime on about which places to eat when in New York City. But on a recent road trip, we discovered Secret Caverns New York and we realized there is much more to discover!

Secret Caverns is just one of a series of incredible caves in New York waiting to be explored. But this often-overlooked secret cave in the town of Howe’s Cave’s, New York is one that shouldn’t be missed. It often gets overshadowed by its more famous cousin, Howe Cavern, but Secret Cavern is an experience all of its own.

Where Is Secret Caverns, New York?

Our long weekend trip to Watkins Glen State Park really opened up our eyes to the amazing nature that is abundant in New York. So, we have it our mission to discover places that are within just a few hour’s drive from Toronto, Canada.

As we were researching for more waterfalls in the area to visit, we found a secret! Located deep within a cave, was a waterfall, hidden from view, but open to the public for visitation. As we love visiting caves with kids, off we went on a 5.5 hr road trip from Toronto to Howes Cave, New York.

The 100 ft waterfall is located within Secret Caverns in Howes Cave, New York. It is the final attraction in this New York show cave. But I am getting ahead of myself! So, let me start from the beginning. The drive from Toronto to Howes Cave was mostly on multi-lane highways.

We chose to take the interstate highway, I-90, which is a toll highway in New York, to speed up the drive. At less than $10 for the toll we felt it was definitely worth the time it saved us. The final 30 or so kilometers were on rolling country roads. The kids enjoyed seeing all the farm animals lazing around.

As we got closer to Cobleskill, the town where Secret Caverns is located, we started seeing the infamous billboard signs promoting Secret Caverns. We had read about the history of the signs at the Secret Caverns website. Each sign is unique and artistically decorated by hand by the guides.

At the time of our visit, Secret Caverns was open from 11 am – 3 pm. Reservations ahead of time were not necessary. Tours were conducted every half an hour; more often if it is busier. They are open year-round and only close when inclement weather causes flooding into the cave.

The entire journey underground is less than 1km (0.5 miles) and takes approximately 1 hour. The tour starts at the lodge where you buy your tickets. According to the story, the caves were discovered when cows accidentally fell into the cavern in 1928.

The “original” entrance is now blocked off. Instead, we descended down 103 steps to the concrete floor. I could immediately feel the temperature difference. It was a warm day out at 29ºC.

But the cave interior was 10°C, as always. As we climbed lower it was easy to see the different layers of exposed limestone. The guide also pointed out some fossils when our group had all reached the bottom.

We explored the length of the cave in a single file. There were 10 people in our group (including us). I was told that the tour group is normally kept to less than 20 people.

This is great as the cave was a lot narrower than I had anticipated. There were also spots with low-hanging ceilings. Secret Caverns New York is definitely not for the claustrophobic.

As we neared the waterfall, I was surprised that the sound of the falling water was not more obvious. Except for the tell-tale signs of the mist, I would not have known that a 30 m (100 ft) waterfall was just around the corner.

The tour is not a loop so after getting our fill of the waterfall, we headed back the same way we came in.

Secret Caverns was definitely worth the drive from Toronto to Howes Cave, New York. It’s a family-friendly cave tour and our guide went out of her way to make the tour even more entertaining for C and D.

But our tour of New York’s show caves is not over yet. Just 4 km (2 mi) from Secret Caverns was another cave system, Howe Caverns. And while it didn’t have an underground waterfall, the cavern is explored partly by boat! What is your favorite show cave?

Picture it: your kids. My kids. race to see which set gets through the caverns first. Just a thought...

Actually, really cool place. It's rare to tour a cavern with a waterfall that's more than a steady trickle, so I'm totally intrigued. Have you guys done Lewis and Clark Caverns in Montana? It's a fav for us. OOoooh, summer 2018....

Growing up in Central New York I have visited Howe Caverns many times. This past month I had family visiting from down south, they wanted to go to Howe Caverns. We enjoyed our tour but will agree that HC is very commercial and corporate, our quite basically read from a script and had no personality. On our way home we chanced upon Secret Caverns. How I had never heard of them before was amazing. We decided to take a detour and a quite pleasant one at that. We LOVED Secret Caverns! It was so much more fun and interactive. We had a group of 9 with children ranging from 6yrs to 15 yrs. Everyone had an awesome time and liked it even more than our earlier tour at HC. As my daughter says "you have to go to Howe Caverns first to really appreciate Secret Caverns". It was a definite win and I have told everyone about it... I guess it's not a secret anymore!

That is a great summary of the two. Howe Caverns is certainly impressive and far more expansive, but the personality of Secret Caverns really makes it stand out as a fun and engaging destination!

We just went to both Secret Caverns and Howe's Caverns during Spring Break. I had no idea either of these existed until about 6 months ago. They are both an Amazing Sight to See. Our Favorite parts of Howe's Caverns was the boat ride and The Bridal Altar. Howe's Caverns is much more commercialized and more easily accessible. A hoodie and sneakers or hiking boots would be your best bet. Secret Caverns has a Long set of steep slippery stairs to get in​ and out. I would not recommend bringing small children Especially those that need to be carried. Our trip to the Caverns and Cobleskill was not complete without The Mining Company, Stewart's Shops for their own unique ice cream flavors, and Justine's. If You Love Italian food be sure you bring Your appetite!

Those are great tips. I totally agree that the stairs in Secret Caverns are very steep and I ended up carrying our 3-year-old, although mostly because he was holding up the group :) I wish I had known about the Ice Cream shop, that would have been a great stop!

WHAT?! I had NO IDEA these secret caverns existed! They're right on our path for our summer road trip, so we will have to check them out in person!

That's fantastic! Where else are you heading?

Whoa, looks like so much fun! We just explored some caves in Missouri and I posted a picture of my daughter with the caption, "Kids love caves!" Isn't it so true??

So true! We look for them wherever we go!