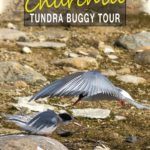 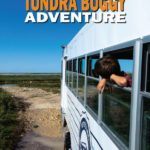 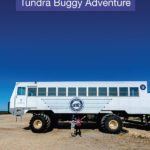 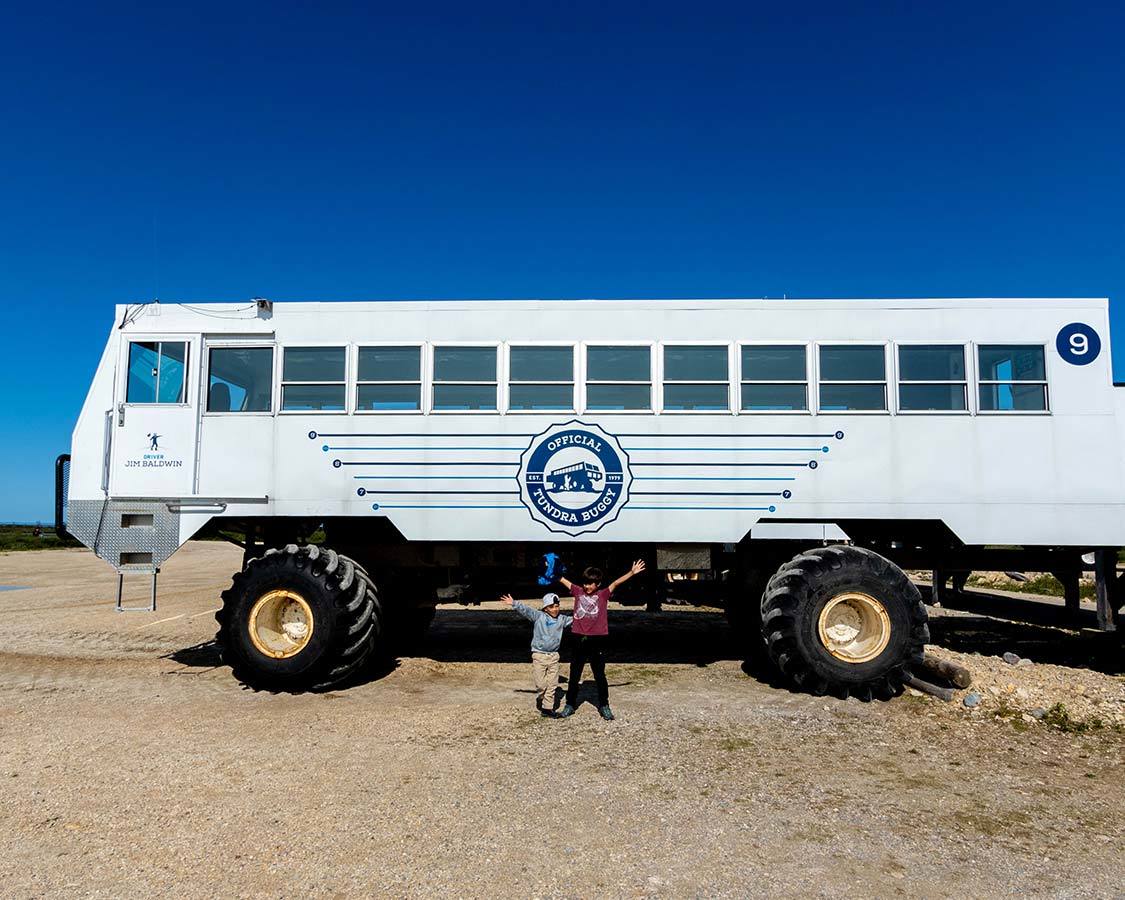 Taking part in a Churchill Tundra Buggy adventure is one of the most popular ways to experience the incredible wildlife of the sub-Arctic tundra in Northern Manitoba. With the incredible landscapes and wildlife that make up the shores of Hudson Bay, Tundra Buggy experiences offer a safe and unique way to delve into the wilds of one of the most fascinating ecosystems on the planet. Perched 15 feet up in the air on a modified chassis that sports tires that stand 5’5″ (1.68m) from top to bottom, the Tundra Buggies sit safely out of reach of even the tallest polar bears. My family had unbelievable views of the spectacular tundra that surrounded us. After our time kayaking with Beluga whales the day before, we were prepared for a lot of animal encounters. While the Tundra Buggy experience often sees polar bears and beluga whales, we never expected the encounter that even left our Frontiers North guide speechless. This experience made our list of the top family-friendly wildlife experiences in the world. And you’ll soon see why. 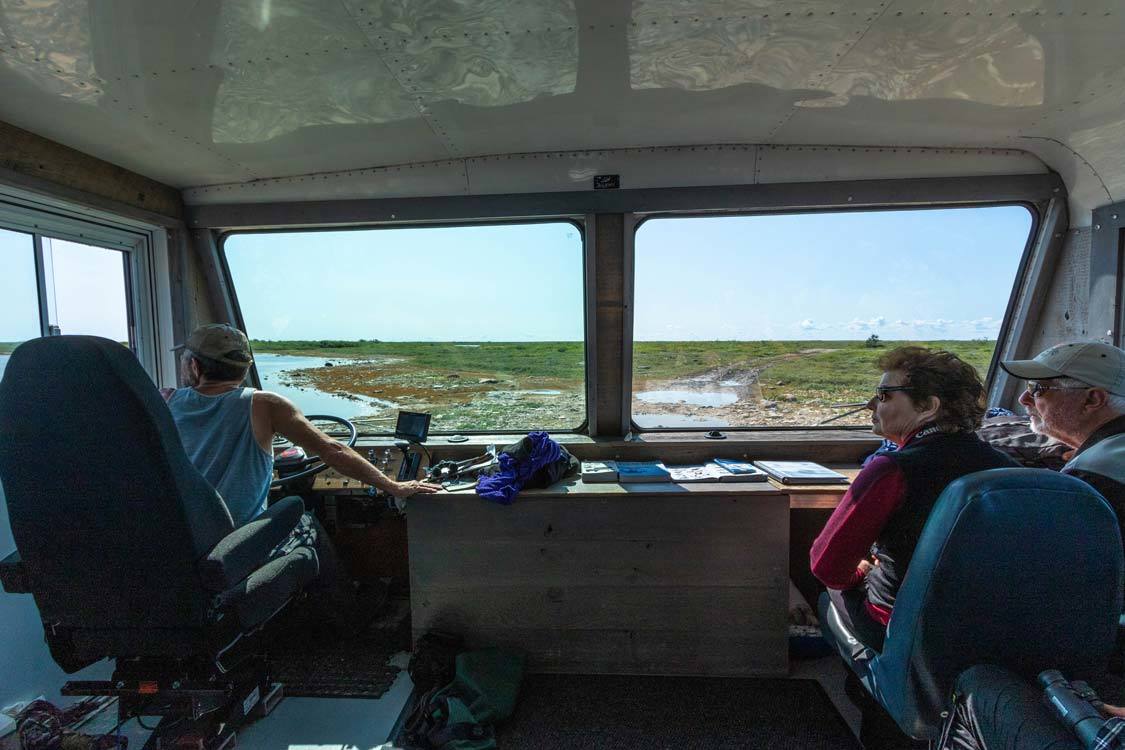 What Is The Churchill Tundra Buggy Adventure?

The Churchill Tundra Buggy is an off-road overland experience offered by Frontiers North. There are other large-vehicle excursions offered in Churchill, but the Frontiers North experience is the original. It has been operating since 1979. While the name buggy may portray an image of cuteness, the Tundra Buggies in person, are all business. These massive all-terrain vehicles are designed to navigate a series of former military trails that criss-cross the sub-arctic tundra. And it’s this unique design that makes the Churchill Tundra Buggy one of the best ways to get up-close and personal with the legendary wildlife of northern Manitoba.

The Frontiers North Tundra Buggy is capable of traversing the rough landscape year-round to bring visitors to Churchill up-close and personal with wildlife such as polar bears, wolves, birds, and beluga whales. The Tundra Buggy is the only vehicle that makes the winter trek over the icy Churchill River to experience some of the most remote regions of Churchill Manitoba.

The Tundra Buggy in Churchill also acts as a remote eco-lodge during the high season. For multi-day excursions, Frontiers North pairs the buggy up with other lodge-style Tundra Buggies in special locations along the shores of Hudson Bay. It’s these magical experiences that allow visitors to wake up with majestic polar bears resting just a short distance from their bedroom window. The company partners with Polar Bears International, a non-profit focused on the conservation and research of the polar bear population. 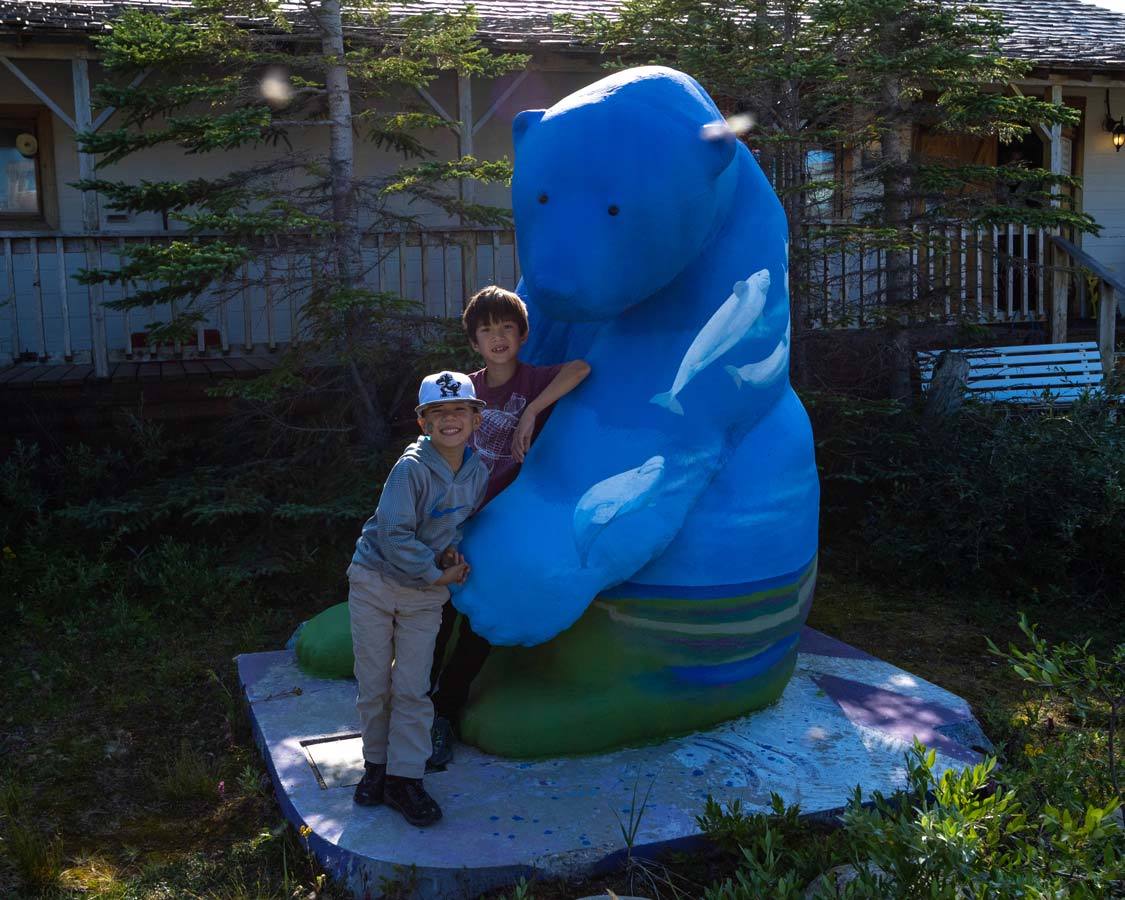 Our Churchill Tundra Buggy experience began bright and early at the front of the Fifty Eight North office. As we waited for the final boarding of the bus to the safari start-point, our boys, who were aged 5 and 8 spent time playing on the blue polar bear statue that stands prominently outside the office. We had been waiting for this adventure family travel experience for a long time. And after spending the previous week down in Winnipeg Manitoba, we were more than ready for another incredible adventure.

We boarded the bus, familiar already with many of the faces among the small summer Churchill travel visitors. As we drove out towards the former military trails that now make up much of the area between Churchill and Wapusk National Park, our driver, Jim, pointed out many of the popular landmarks that visitors to Churchill Manitoba love to explore. You can read more about them in our Churchill Manitoba guide.

It wasn’t long before we had reached the edge of the city limits and were heading down dirt paths towards the launch point for our Tundra Buggy adventure. As we arrived in the yard we were faced with what looked like a cross between a small building and a monster truck. The Frontiers North Tundra Buggies sat on top of massive wheels. And the windows were all lined up nearly 10 ft. (3m) in the air. Since adult male polar bears can reach that height, these massive land machines allow you to get as close as possible to a curious bear while staying safely out of reach. You can read about the top wildlife experiences in Canada here. 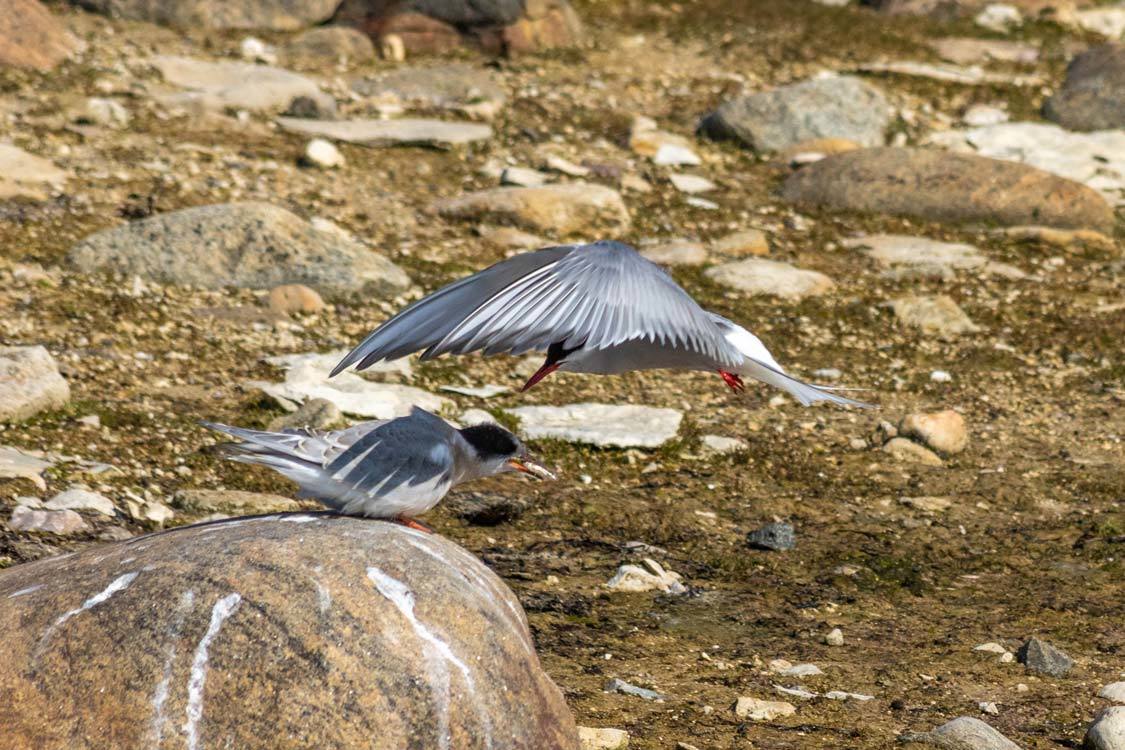 Considering the massive size of the Churchill Tundra Buggy, the boarding was very easy. There was a large platform that sat at the top of a set of wooden stairs. This way, boarding was done over a flat surface rather than having to climb a ladder. The seats were large and comfortable with two rows of two chairs. There are also chairs up at the front with easy access to the large front window. There is a bathroom on board. And there is plenty of room to walk around and move seats to get a better view of the Churchill wildlife. At the back of the Tundra Buggy is an open-air platform for those wishing a bit more freedom for their Churchill wildlife photography. The platform is enclosed at the bottom so there is no risk of falling out.

For a giant people-mover, the Tundra Buggy rode like a cloud. Even over the largest bumps and deepest streams, the most we felt was a deep, comfortable roll. The 40-passenger truck, which wasn’t filled to capacity due to the summer off-season seemed like it could roll over just about anything.

There were cold drinks including water and soft drinks available on the Frontiers North tour as well. Lunch onboard the Tundra Buggy was excellent. We were served pre-made sandwiches and one of the best soups I’ve ever tasted. The soup was catered by one of our favorite restaurants in Churchill, the Tundra Inn. Lunch included coffee and tea, and of course, hot chocolate for the kids and kids at heart. 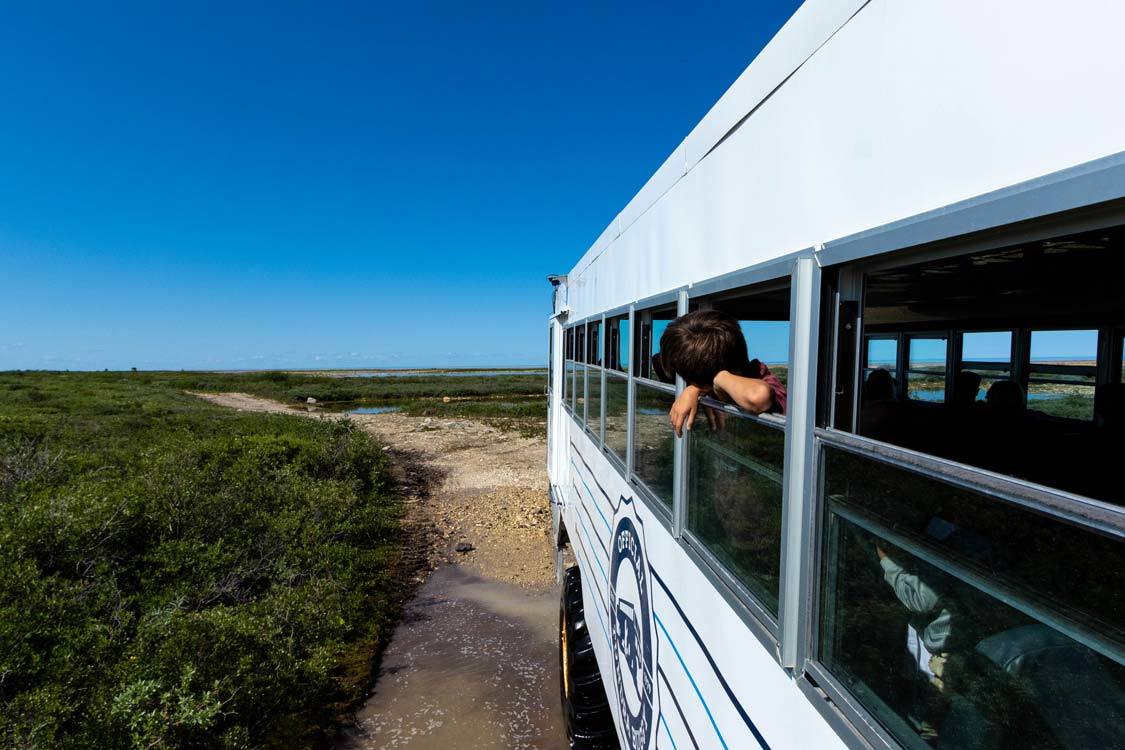 Exploring The Sub-Arctic Tundra of Churchill

The route we took crisscrossed the tundra. Along the way, we saw absolutely spectacular scenes featuring local wildlife. The boys were mesmerized as we saw stopped and saw flocks of birds swirling around us. One of the wildest scenes came as we saw Arctic Terns feeding young ones from the air. The scene made for one of the most dramatic series of photos that I took during the trip.

But by far the coolest experience that we had during our Churchill Tundra Buggy adventure was something that no one, not even Jim was expecting. Our eldest son, C, was watching the scenes fly by out his window when he sat bolt upright and yelled “wolves!” His eyes must be CRAZY sharp because I couldn’t see them at all. But before long three small dots came walking along one of the military trails. A moment later two of the wolves went off back the way they came, but one continued down the path. Shortly it crossed right in front of our Tundra Buggy.

The small wolf waded into a shallow pond and stood stock-still for a few moments. We all watched in anticipation wondering what would happen next. And then it happened. The wolf took off like a shot, racing across the shallows. It was then that we noticed the lone goose. In one fell swoop, the wolf snatched up the goose in his jaws. The whole crowd on Tundra Buggy exploded in amazement at the scene that had unfolded in front of our eyes. Even the boys couldn’t believe what they had seen. It was like all the excitement of our favorite BBC nature documentaries but in real life. 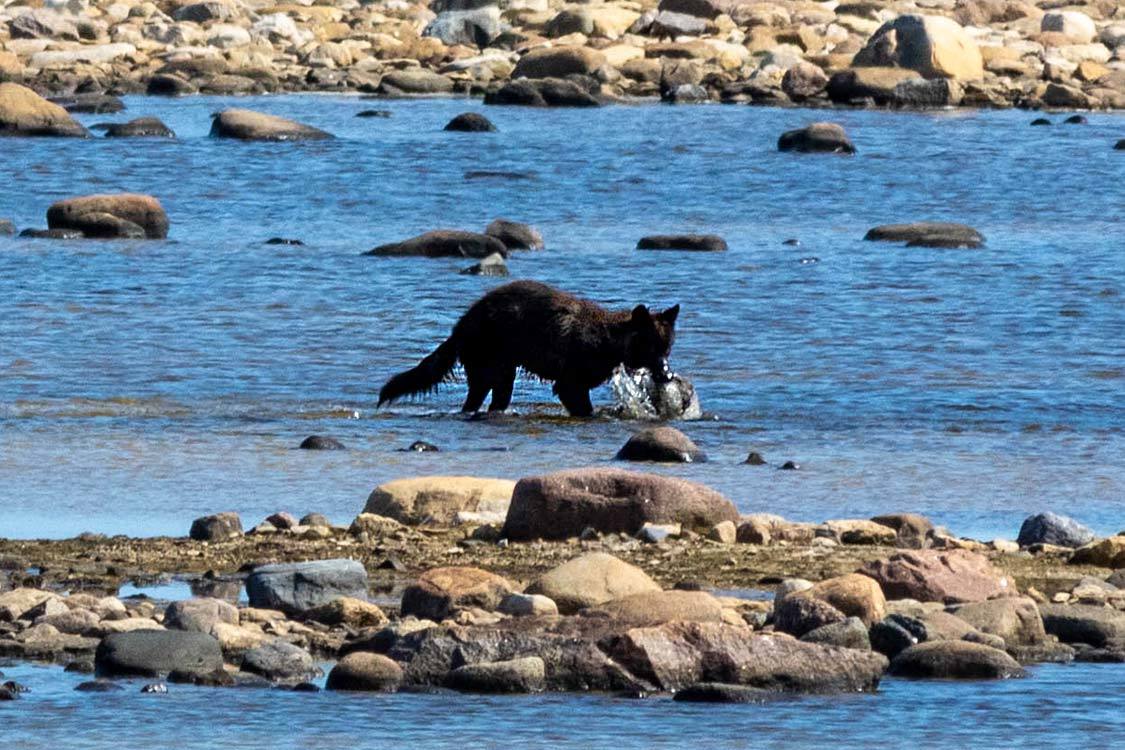 How To Prepare For The Churchill Tundra Buggy Tour

Just like most travel to Churchill Manitoba, A Tundra Buggy adventure requires a bit of planning to make sure that you have the best experience. Everything from planning what time of year to do a Tundra Buggy tour, to what to wear and what camera gear to bring. Hopefully, I can answer your biggest questions about the Churchill Tundra Buggy experiences. And if I missed something, drop a comment below and I’ll be happy to answer your Tundra Buggy questions.

What Time Of Year Should You Do A Churchill Tundra Buggy Tour?

There are two seasons for Tundra Buggy tours in Churchill Manitoba, Autumn, and Summer. Both offer an incredible and unique experience. Here’s what you need to know about each one.

The most popular time for Tundra Buggy tours in Churchill Manitoba is during the Autumn season. This is when the legendary Polar Bears of Churchill Manitoba congregate on the shores of Hudson Bay as the sheet ice begins to build-up enough for the bears to go out and hunt seals. The Autumn Tundra Buggy tours offer the best chance of getting those epic Churchill polar bear photos that so many visitors up north are seeking.

The Autumn Tundra Buggy tours in Churchill run from sunrise to sunset from mid-October to mid-November. This is to take advantage of the short amount of daylight in the sub-arctic region. During Autumn visitors have a chance of seeing polar bears, arctic hare, arctic and red fox, gyrfalcon, ptarmigan and more. These are the most popular tours, and the 40-passenger Tundra Buggies fill up fast, so make sure to book early. 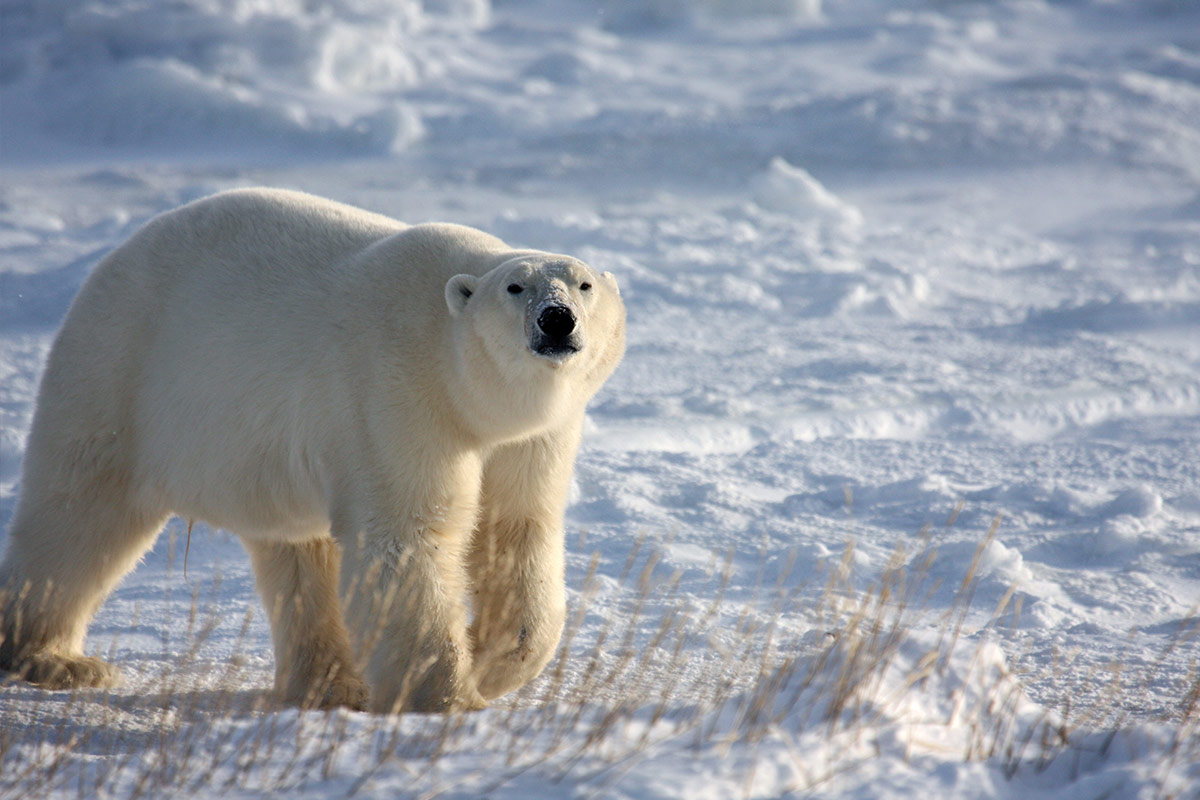 Summer is the off-season for Tundra Buggy adventures in Churchill. It’s much easier to get space on one of the tours during the summer than it is during the winter. But it’s also less likely that you will see polar bears during this time. With that being said, polar bears can be found around Churchill year-round, so seeing one isn’t out of the question. But that doesn’t mean that a summer Tundra Buggy tour isn’t worth it. There is an amazing variety of wildlife to explore during the summer season.

Those who take in the summer Tundra Buggy tour see an entirely different side of the Churchill landscape than those who visit during the winter. The tundra is booming with flowers, foxes, arctic hare, and over 200 species of birds. These tours are very popular with birders who can see some of the rare migratory species that make Churchill their home during the summer months.

What To Pack For Your Churchill Tundra Buggy Adventure 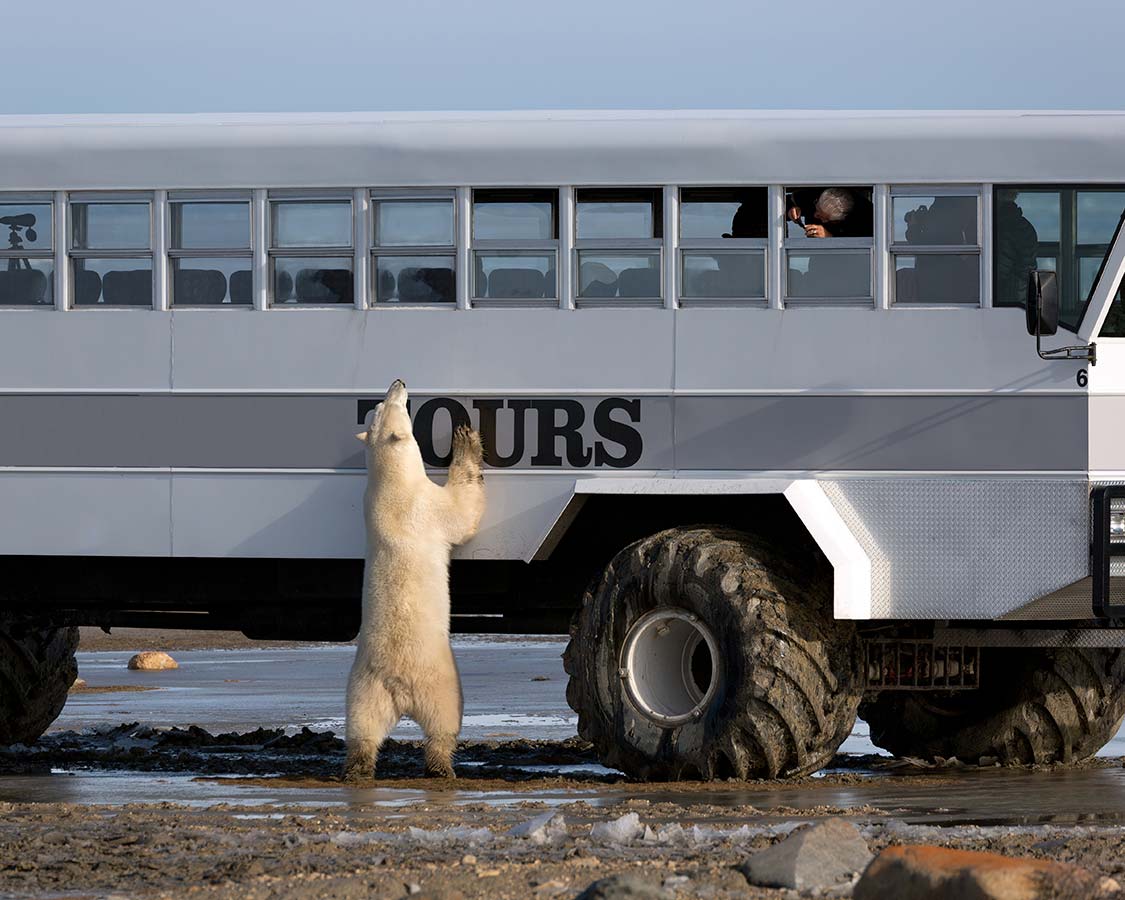 Do We Recommend A Churchill Tundra Buggy Adventure For Families?

If you’re considering exploring Churchill with kids, I highly recommend having a Tundra Buggy tour be a part of your adventure. There are few better ways to see the incredible tundra that surrounds Churchill. Although it’s rare not to see a polar bear during one of these expeditions, that did not take away from our journey. We ended up seeing several bears during our time around the town. And the wolf chase that we saw was something that we will never forget.

Disclosure: Our Tundra Buggy Experience was hosted by Frontiers North. All opinions remain our own. Wandering Wagars is a participant in the Amazon Services LLC Associates Program, an affiliate advertising program designed to provide a means for sites to earn advertising fees by advertising and linking to amazon.com, amazon.co.uk, amazon.ca. Amazon and the Amazon logo are trademarks of Amazon.com, Inc. or its affiliates. 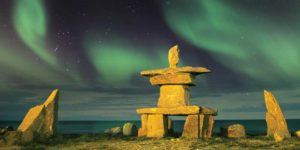 The Ultimate Guide To Churchill Manitoba 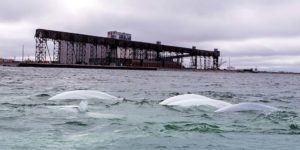 Kayaking With Beluga Whales In Churchill 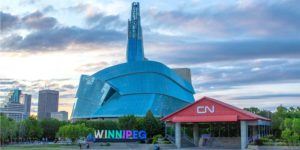 Exciting Things To Do In Winnipeg 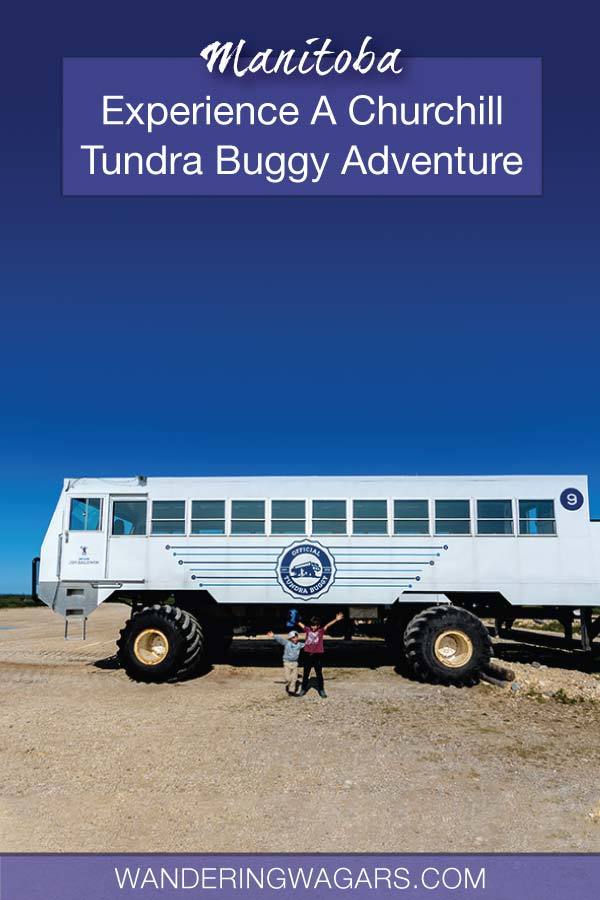