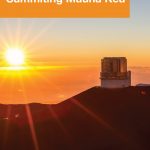 On the way, we would summit Mauna Kea, the island’s most famous peak. Similar to Haleakala on the island of Maui, Mauna Kea is one of the highest points in Hawaii and offers an otherworldly landscape unlike most traditional views of Hawaii.  Rather than taking the shorter route by cutting across the interior using Saddle Road, we decided to follow the coast and enjoy some of the splendor of the island. During our drive, we stopped often to gawk at waterfalls and lava tubes along Hawaii Belt Road. The shorter route would have taken slightly more than 1.5 hours without stops and the longer route doubles the time. Since we were planning a lot of sightseeing we left early to give ourselves enough time to be at Mauna Kea by sunset.

About Mauna Kea: The Big Island

One of the reasons the Big Island of Hawaii had been on our bucket list was because of the active volcanoes on the island. However, the dramatic landscape is also dotted by several dormant volcanoes. At 4207 meters (13,803 feet) the dormant volcano, Mauna Kea is the highest point in Hawaii. It is also considered the world’s tallest mountain if measured from its base on the ocean floor. It towers over the next closest volcanoes in the state such as the dormant Haleakala Volcano the valley island of Maui.

The Experience At The Summit of Mauna Kea

One can summit Mauna Kea by car or on foot. By car, there are two options. First, it is possible to sign up for an organized tour. If you do not have a 4-wheel drive vehicle or you are not comfortable driving an unpaved, rocky, and steep road in total darkness, then joining a tour is your best bet.

The tours will pick you up at a pre-arranged meeting point and all you have to do is sit back and enjoy. The second option is to drive your own 4×4 vehicle. But, many rental agencies will have a caveat in their contract that their vehicle is not allowed to summit Mauna Kea and that any damage to the car due to going to summit Mauna Kea will be at the renter’s expense. We chose the latter option and crossed our fingers and toes!

Pro-Tip: Arrive at the Visitor Information Station a few hours before sunset to allow for time to acclimatize. But also to beat the crowds! Parking is sparse and you want to make sure you have a spot after driving all that way.

No matter which form of transportation you decide on, it is highly recommended that you include a stop at The Onizuka Center for International Astronomy Visitor Information Station for at least an hour to acclimatize to the altitude. It is also a good resource for determining the weather conditions to the summit. Plus, at 2,835 meters (9300 feet) it is one of the best observation sites in the world. We found the hour passed by quickly! We had a great time pretending to be astronomers by trying out the various telescopes on hand.

At the time of our visit, there was also a third option: free tours organized by the Visitor Information Station on the weekends. However, as of 2016, this program has been canceled indefinitely. But, it is worthwhile to check their website in case the tour has been revived.

With sunset about to arrive in a few hours, we decided to hop into our Jeep and make the slow and winding 8 km drive to the summit. The road was as challenging as we had been warned. The paving ended shortly after leaving the Visitor Station and the ride to the summit was full of narrow switchbacks. Soon we were above the clouds and the view was stunningly clear.

Pro-Tip: 4×4 vehicles often book well in advance in the Big Island. If you absolutely require a 4×4 vehicle during your trip, it is best to pre-book to avoid disappointment.

For the adventurous, it is also possible to hike to the summit of Mauna Kea. However, the steep grade and the loose terrain made of volcanic stones make the hike challenging. Add to the mix the altitude, the hike should not be taken lightly. It takes several hours to reach the summit and there are no provisions along the way so it is necessary to bring both food and water.

With some time on our hands before exploring the summit, we visited the Mauna Kea Natural Ice Age Reserve. This reserve is located just below the summit and has its own parking area. The area is of significance because it contains the Mauna Kea Adz quarry. It is thought to be the largest primitive quarry in the world. It contains basalt stones that were used to make blades for adzes. An adz is an ax-like cutting tool used by Hawaiians during the stone age.

The reserve is also home to the only alpine lake in Hawaii, Lake Waiau. Located just below the summit at almost 4000 m, it is one of the highest lakes in the United States. It is a small lake though and only reaches a maximum diameter of 100 m. The source of water in the lake is unknown, but there are many theories! Interestingly, the lake dried up to a mere puddle in 2010. This was thought to be due to drought conditions that the state suffered through for a few years. But, as of 2016, the water levels have come back to what they were before the drought.

Pro-Tip: Hiking at the top of Mauna Kea can be very strenuous due to the altitude. Take your time, ensure someone knows where you are, and make sure you have plenty of water with you.

At this point, we realized that the sun was getting ready to set so we focused on driving to summit Mauna Kea. The summit is home to the Mauna Kea observatory, and astronomers playground that is not open for public use. It is an international collaboration which contains 4 telescopes (2 of which are for submillimeter astronomy), 1 optical, 3 infrared, and 3 telescopes that are optical/infrared. The Manua Kea summit is prime for galactic viewing due to the clarity of the atmosphere and the isolation of the area. There are also laws that prohibit light pollution from entering the summit.

Alas, the time had come and we were able to view one of the most beautiful sunsets we had ever witnessed. We planned on staying at the summit to take some night time pictures. But, we soon realized we did not come prepared for the weather. The temperature on the summit was cold when we arrived and dropped sharply with the setting sun. The wind was also very strong making long exposure shots difficult. With this combination, we hopped back into the jeep and made our slow descent back to Kona.

Now that we can cross “summit Mauna Kea” off our bucket list we would be exploring more of the Big Island. In the next few days, we will visit an active volcano in Hawaii Volcanoes National Park and diving with Manta Rays off the coast of Kona.

I'm the crazy one who will do the hike. The slower desolate way is always intriguing. I didn't have time to go to Big Island to do this hike. So thanks for this post as now I know what to expect. Cheers!

hi Christina! First of all thank you for sharing this experience! Hawaii is pretty high on my bucket list thus any information is more than welcome. Oh and I absolutely LOVE hiking on the volcanos! I am pretty jealous right now indeed ;) A side question - what kind of plugin do you use for "related articles" section please? I really like its clean and elegant layout. Or is that build in within the page/ theme? Thank you in advance!

Thanks Nika! We're so glad you liked it and I hope you get the chance very soon!

Our related posts tool is actually built into our site rather than a plugin.

Amazing hike... congrats for reaching the summit. The very mention of a volcano, although dormant, makes the experience more thrilling. I loved the shot from teh summit, looking down at the clouds.

Such a beautiful view at the summit! I've heard about the Big Island in Hawaii but never Mauna Kea. It draws so much interest to me since I'm into hiking and those captures you have there are just stunning!

Wow this looks like such a surreal experience! I only made it to Oahu but would love to return to explore the other gorgeous islands