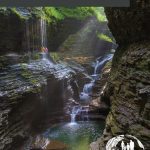 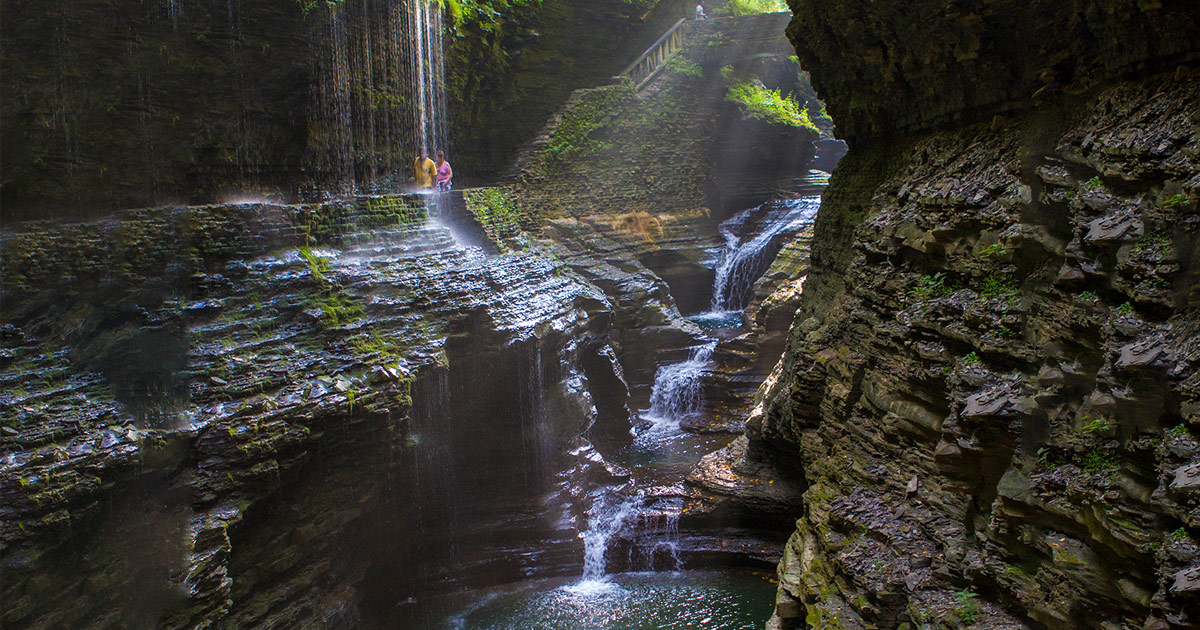 The Finger Lakes region of New York State had been suggested to us by some friends as a great spot for a winery tour. We followed up with some research and Google filled our eyes with stunning photos of Watkins Glen State Park which is a part of the Finger Lakes region. The photos captured our imagination instantly, and we needed to know if real-life was as amazing as the Google images in front of us. This was a place so gorgeous that our intended “date” weekend would have to become our next family destination for the upcoming long weekend.

From Toronto, the drive to Watkins Glen, New York is a little over 4 hours. To break up the drive, we planned to stop and spend a chunk of the first day in Rochester where we would take the opportunity to visit the Strong National Museum of Play in Rochester before completing the rest of the drive to Watkins Glen, New York. On our way back from Watkins Glen we also stopped at nearby Corning, New York to visit the wonderful Corning Museum of Glass.

Aside from the normal long weekend traffic on the highway, the drive to Rochester was uneventful. After leaving the National Museum of Play, we drove through several towns with pretty, tree-lined streets, past large colonial mansions, many of which, in the college towns, had been converted to bustling fraternity and sorority houses. We didn’t hit any traffic again until we were just outside of Watkins Glen village. Traffic leading into the town was jammed. It turned out that this was the weekend of the annual Watkins Glen Grand Prix. Surrounding us were race fans and antique automobiles as far as the eye could see. 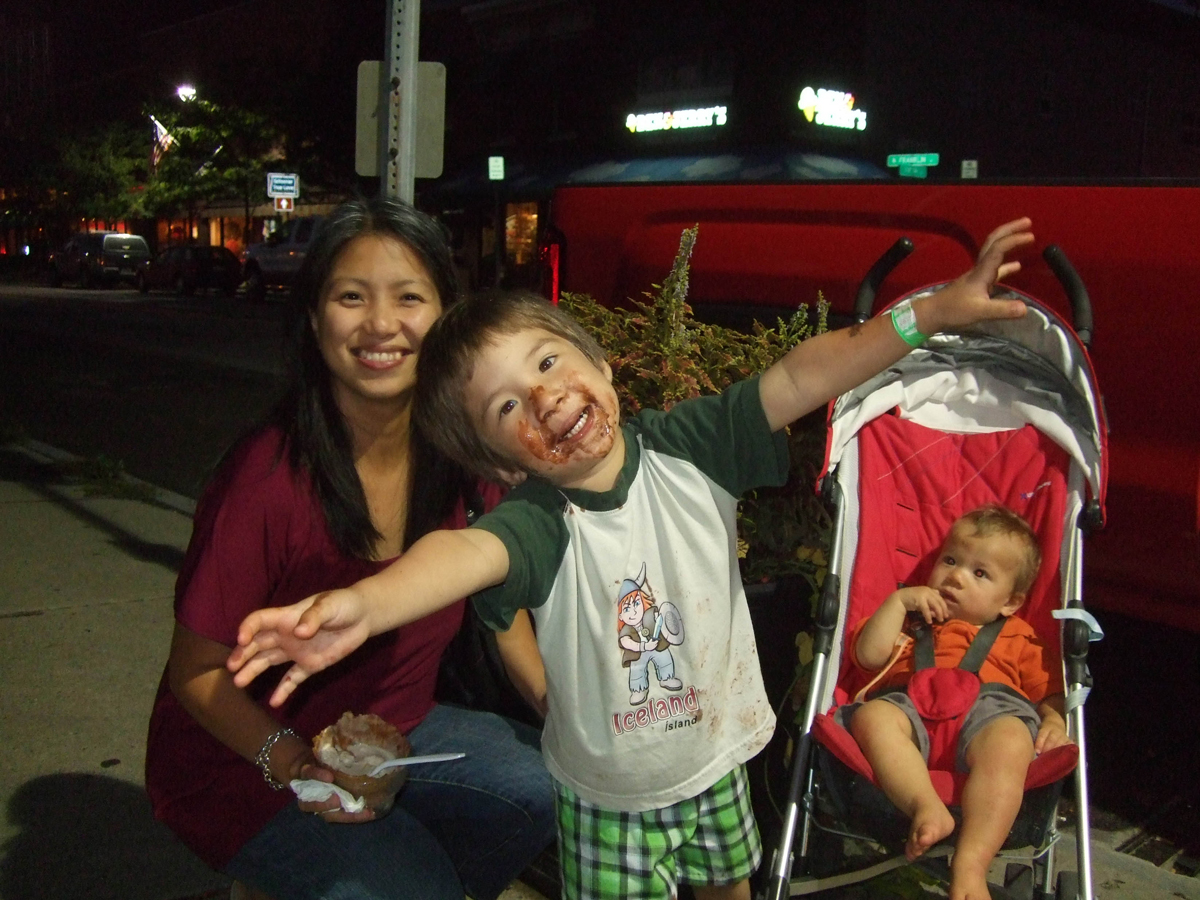 It was a crawl to our motel, the Watkins Glen Villager motel, which would normally have only been a 5-minute drive. C and D didn’t mind, though, using the time to admire all the “cool” cars passing by. We arrived and got settled into our motel. Our room was simple, clean, and very large. The motel was right in town and we picked it because of its low cost and walking distance access to Watkins Glen State Park. With lots of time to spare before dinner, we indulged in our kids’ favorite activity: eating ice cream.

We walked along Franklin St., which is the main north/south thoroughfare in the village. As soon as C saw the “Bear eating an ice cream” wood carving, he knew we had to stop at the Colonial Inn and Motel ice cream shop. We were not disappointed! This Ice Cream shop is something special, not just for its great location near the park, but it has a live beehive visible through plexiglass that fascinated the kids.

Watkins Glen State Park is fairly small, covering only 3.15 km², but it’s small size packs in over 19 waterfalls. The water comes from the Glen river which helped form the 400-foot deep gorge which is the centerpiece of the park. There are two entrances into the park, the main entrance, and the upper entrance. 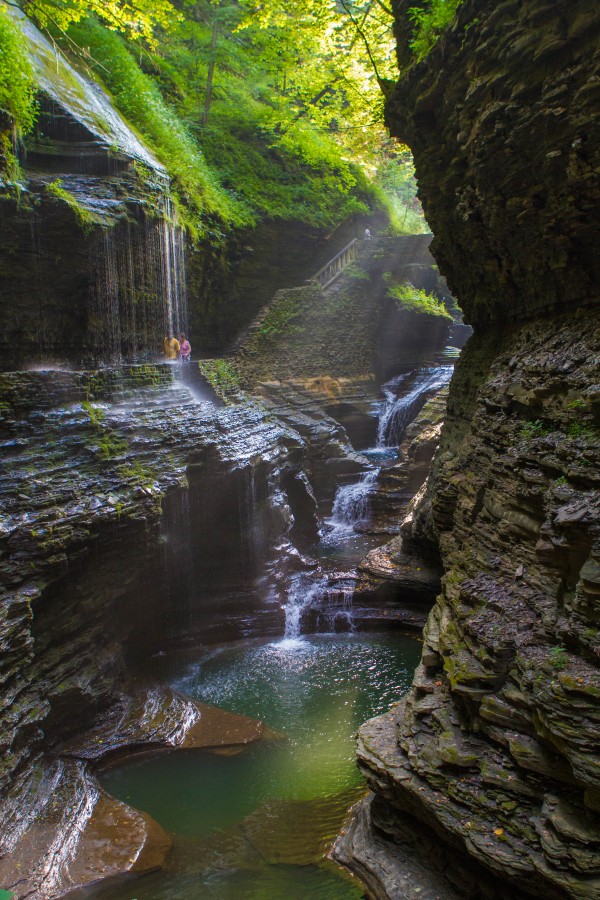 The Gorge trail is the only trail that follows the twists and turns of the gorge. It also provides access to the stone bridges and offers the best views of the numerous waterfalls. We decided we would explore the park via the Gorge trail starting at the main entrance first thing in the morning.

We headed out to the Watkins Glen park early in the morning to beat the crowds. Kevin strapped D into our Deuter kid carrier and off we went. To our surprise, there was no entrance fee, only a fee for vehicles parking in the park’s lot. After rounding the corner from the parking lot, we got our first view of the gorge. It was spellbinding! We entered the Gorge trail via a tunnel which led to the first of several of the parks stone bridges, 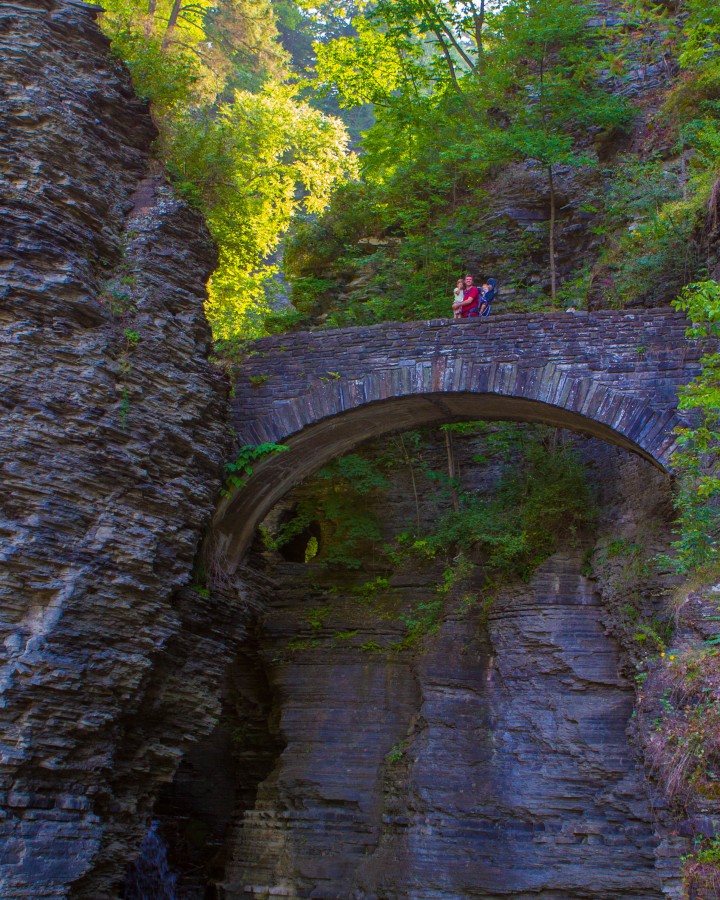 The Sentry Bridge.  After snapping some photos of the picturesque entrance, we walked through the tunnel and were instantly transported into another world. Entering the gorge is an amazing experience where it seems as though the quaint town of Watkins Glen disappears and we were swallowed up by bright green flora, cascading waterfalls and tall cliffs that seemed to reach around us in a tight embrace. The smells of the gorge engulfed us as well, the summer heat giving way to a cool, humid mist that seemed to freshen up everything it touched. 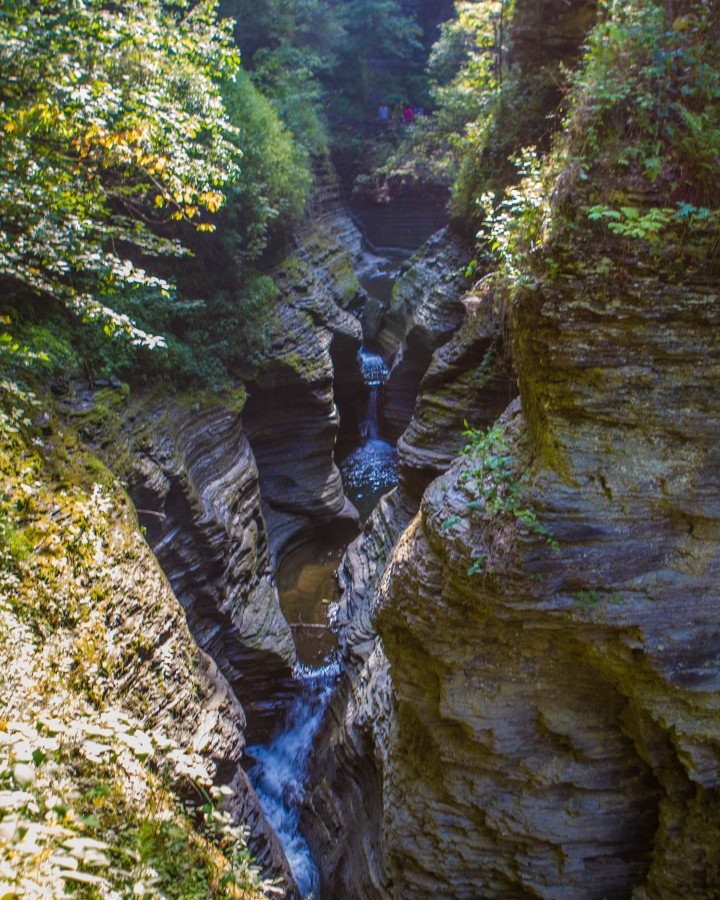 Pro-Tip: The parking pass is good for use in all the other state parks in the area if you used on the same day.

We admired the view and the gorge pulled us further in towards the first waterfall. The Cavern Cascade is one of two waterfalls that people are able to walk behind. We dipped our hands into the cool, clean cascade and continued on towards the spiral tunnel. C ran ahead into the tunnel and dodged the drips of water coming from the ceiling as he ran up the stone steps towards the exit of the tunnel.

As we made our way out of the second tunnel we caught our first glimpse of the only non-stone bridge in the park. The Suspension bridge rises 85 feet from the floor of the gorge and can be accessed via a cliff path you’ll see after emerging from the spiral tunnel. We walked under the bridge enjoying the trail until we got to the Narrows. 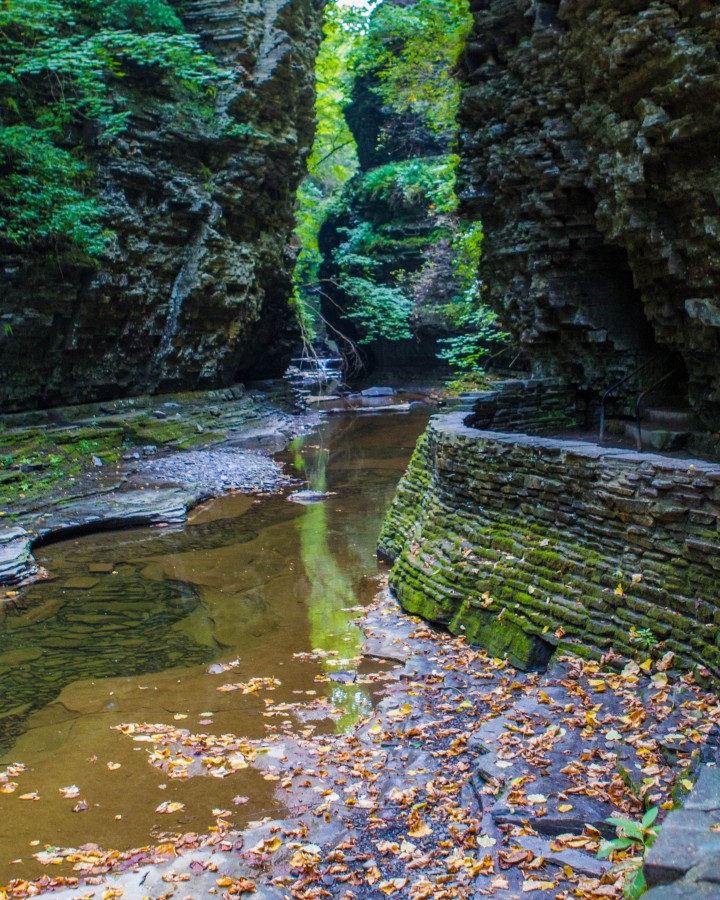 It is said that the gorge here has its own micro-climate and we noticed ferns and moss growing on the rocks. After climbing some stone steps, we reached Glen Cathedral. Here the climate is distinctly different than the Narrows. With the sun shining brightly it was easy to see that the rocks in this area of the gorge were dry. We paused, Kevin, pointing out to C the rocks and fossils from what was once an ancient seabed! 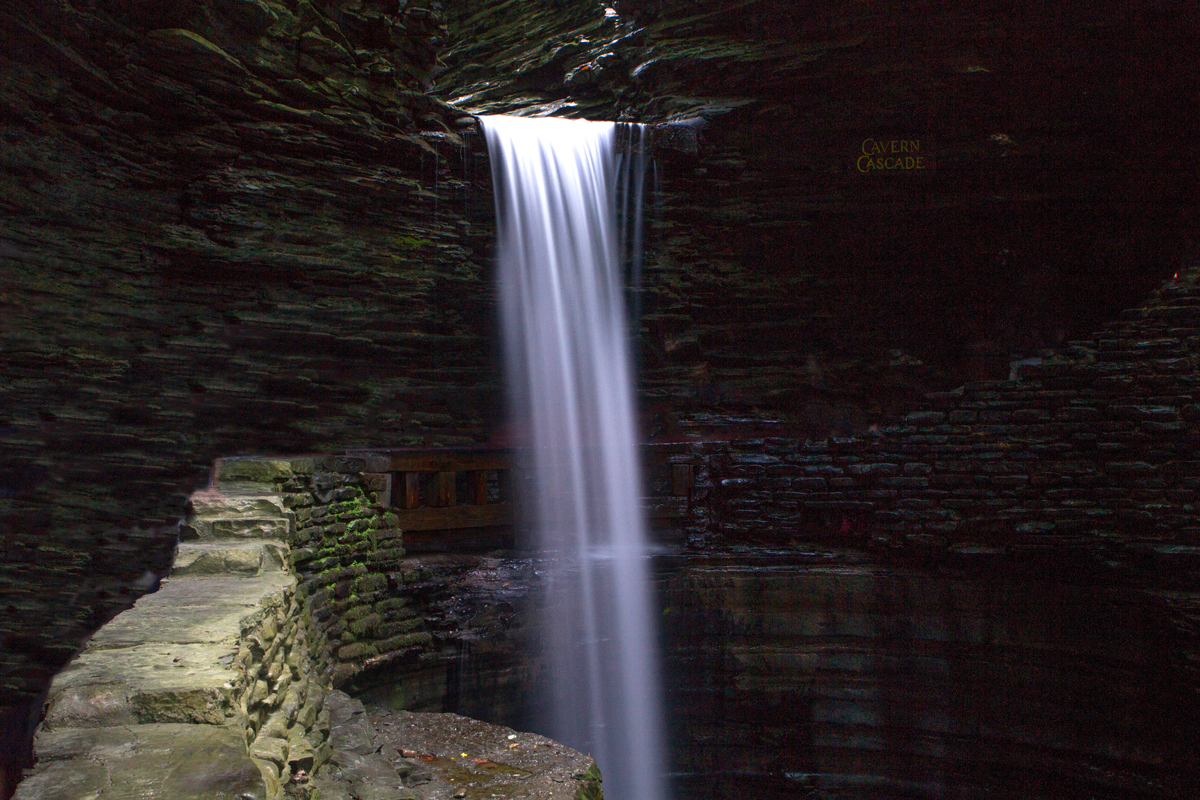 Pro-Tip: This is not the place for heels or flip flops. The stone walkways and steps were slippery at many spots and we were glad we had brought our hikers.

Further along, we reached the tallest waterfall in Watkins Glen. Called the Central Cascade, the falls plunge 60 feet into the gorge, giving off a wide mist and wetting the nearby path. We reached the rock bridge which we crossed to get a better view of the clear and inviting pools of water called Glen of Pools. Soon we had reached the second waterfall which we could walk behind, Rainbow Falls. C wasted no time seeing just how wet he could get! The name Rainbow Falls comes from how the afternoon sunlight hits it just right creating many rainbows around the falls. 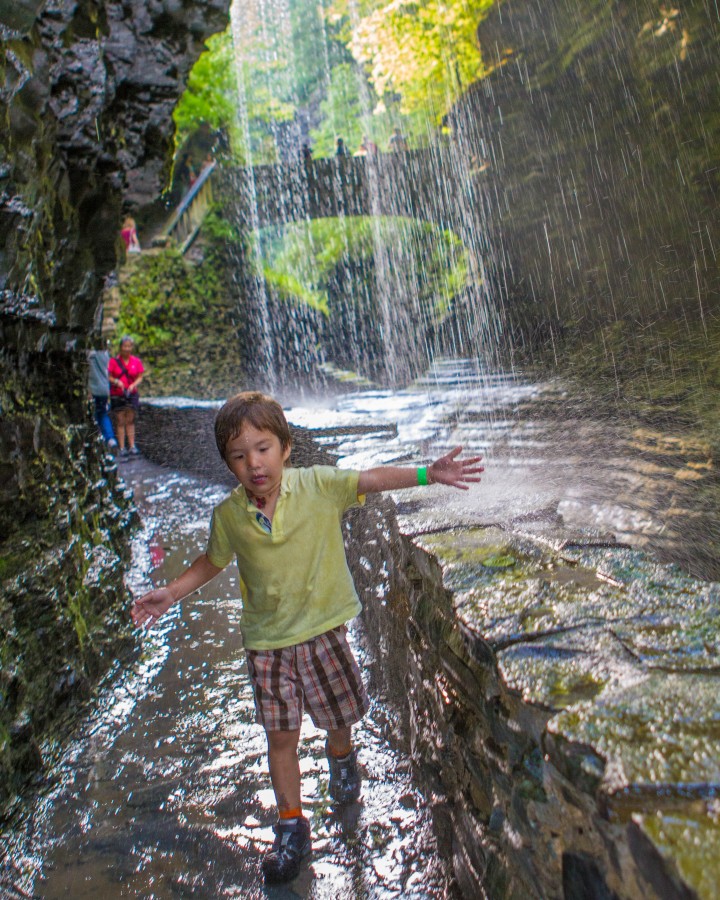 After passing through another gorge and bridge, we reached the end of the Gorge trail. Tired from the long day we decided to walk to the Upper entrance to catch the shuttle back to the main entrance. This meant climbing the 180 steps called Jacob’s ladder which leads to the upper entrance.

When we reached the shuttle pick-up point we realized we had gone into our hike with a serious lack of planning. The shuttle had made its last pick-up just 15 minutes before we got there! Exhausted, but not willing to let this get us down, we made our way towards the Indian trail for the 2.4 km walk back to the main entrance. 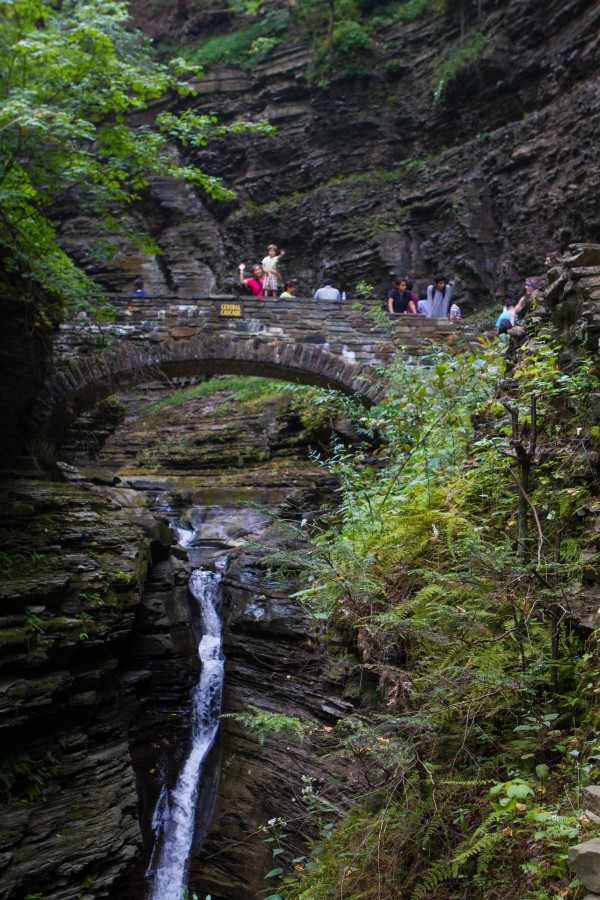 Pro-Tip: There are no washroom facilities or places to purchase food/drinks inside the park. Make sure to pack enough water and snacks to keep your energy level up. At the time of our visit, there were vendors outside of the park that sold water.

The walk back on the Indian trail was uneventful. We had time to reflect on our day and to discuss how The Finger Lakes region, with its quaint wineries and breweries, incredible cottage country and of course, spectacular Watkins Glen, has so much to offer. I was already planning our next trip to the area! We can’t wait to go back. When we finally reached the main entrance, we decided that we certainly deserved a treat and headed for another visit to the Colonial Inn and Motel Ice cream shop for some much-deserved ice cream cones. After our treats, we returned to the motel where we jumped in the pool before getting ready for dinner. Tomorrow we would be driving back to Canada, but first a stop at the Corning Museum of Glass. 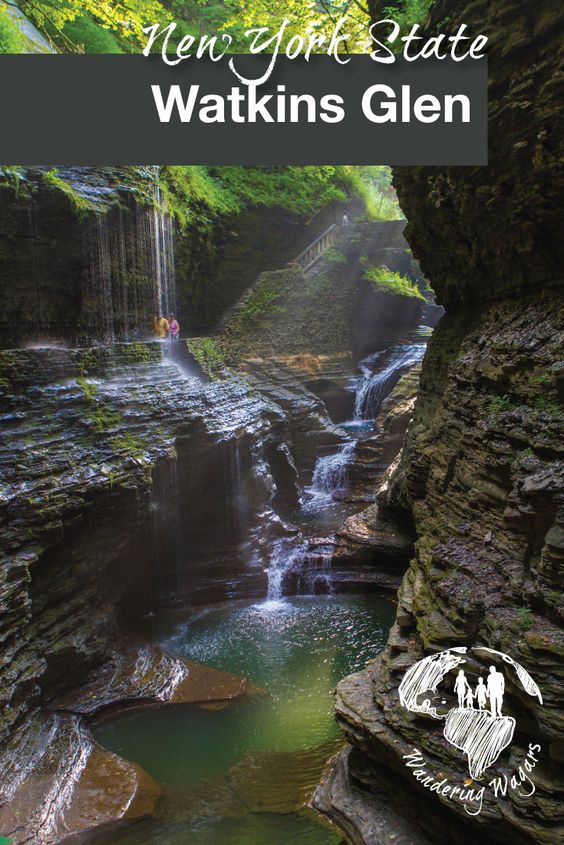